An Ormeau murder bid emerges from the past 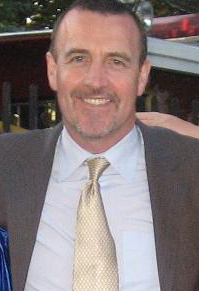 ASYLUM: Malachy McAllister has been ordered to surrender himself “for removal”

Last November, Malachy McAllister was in receipt, via his lawyer in Belfast, of a letter from the Police Service of Northern Ireland asking him for information about the incident that resulted in Malachy and his family fleeing Northern Ireland and travelling across the Atlantic, first to Canada, and from there to the United States.

The letter to the solicitor came from the PSNI’s Legacy Investigation Branch and related, in somewhat detached prose, to “a shooting incident at 15 Farnham Street Belfast on 2 October 1988”.

The “incident” was the attack by loyalists on the McAllister family home which involved a lot of bullets entering the living room and a minor miracle given that nobody died. The letter was seeking Malachy McAllister’s assistance, specifically “a statement of evidence from him so that this enquiry can be progressed.” The letter also sought the solicitor’s help in obtaining statements of evidence from two of McAllister’s children, sons Mark and Gary.
In Northern Ireland legal and political parlance, a “legacy investigation” usually means a probe into a foul deed in a dark time. There are many such investigations on the book right now. When he was sent the copy of the PSNI letter by his solicitor, McAllister sent out an email to friends and supporters saying that the letter’s contents had taken a little while to sink in.

“But it looks like there is a live inquiry by the LIB into the attempted assassination of my family and I twenty-seven years ago,” he stated in the email before adding: “Needless to say I was shocked but I am happy to comply with any requests by LIB for information that may eventually lead to some form of justice and closure. I have always made a point of saying how lucky my family was to escape serious injury and that it was a miracle that no-one was struck by the more than 26 shots that were fired indiscriminately into our home but that doesn’t mean that we didn’t suffer from the effects of the shooting. We have no visible scars, however the scars we do have are the ones you can’t see, the psychological ones we live with every day. When I pause to contemplate the past and our present status, especially our immigration status and the adverse effect this continues to have on our lives as well as the stress that it puts on us (the same stress that, I believe, lead to the sudden illness and death of my wife Bernadette) I have difficulty accepting that we were lucky. You simply cannot forget the past when it is affecting your everyday life. And I know this is the situation for many families whom have lost love ones to collusion in Northern Ireland. We just want to know the truth no matter how hard it will be to accept.”

McAllister pointed out that the Sir Desmond de Silva Report had concluded that the RUC (the PSNI’s predecessor) “knew the attack was going to take place and that they failed to act to prevent what could have been by all accounts a massacre of my family”. He went on: “Instead of protecting my family from a loyalist murder squad the British government protected their agent and spy, Brian Nelson, who provided the loyalists with detailed information and photographs of me that reportedly came out off a British military installation dump. He (Nelson) also supplied one of the weapons used in the attack, a VZ58 automatic rifle, which was part of a haul of weapons that Nelson smuggled into Northern Ireland from South Africa that have been linked to nearly a hundred loyalist murders.

“Lastly, Nelson handed over the keys of his own taxi cab to the loyalist death squad that was then used to carry out the gun attack on my home.”
Nelson died in April, 2003.

McAllister’s willingness to cooperate with the legacy probe is not based on what could be described as a solid mountain of confidence. But he is willing to give it a try.
“The British government lied and suppressed the truth about my case for 27 years,” he said in the email. “They lied to the Canadian authorities and illegally participated in proceedings in an attempt to have me deported back to Belfast into the hands of the RUC Special Branch. They sent RUC officers over from Belfast to testify to a United States Federal Court Judge, Henry Dogan, during our political asylum hearing in Newark, New Jersey.

“It is abundantly clear to me that in order to get any meaningful justice from the British government, my lawyers in Belfast will need all the help and support they can get. To that end I will make any communication I have with the LIB or the PSNI public and will provide any and all information pertaining to our case available.”

McAllister concluded: Regarding my present status in the United States, I should like to ask our Congressional leaders who have supported me in the past to act immediately on my behalf by contacting the head of the Department of Homeland Security (DHS) requesting that they join a motion to have our case deferred back to the Board of Immigration appeals for review of the evidence that was not available at the time of our political asylum hearing.

“I should also like to request the DHS to defer action indefinitely on my case based on the information in the Sir Desmond de Silva Report and the latest inquiry into the attack by the C5 Legacy Investigation Branch of the Police Service of Northern Ireland.”

The Department of Homeland Security last month issued McAllister with a ‘Call-In Letter’ ordering him to appear at its Newark office on April 25 so as to “surrender for removal”.