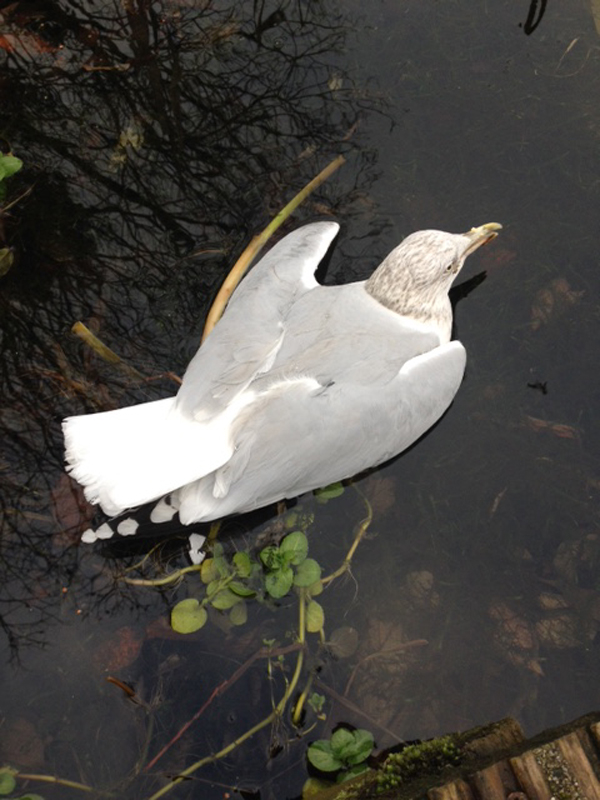 RESCUE: The gull on the Half Moon Lake

‘Tis the season of goodwill – and the Andersonstown News played its part this week.

It started with a near tragedy – a stricken seagull facing death after an accident – and ended with it being given a real chance of survival thanks to a big-hearted motorist.

Reader Donna was driving on the Suffolk Road on Tuesday afternoon when a low-flying gull suddenly crashed into her car. When the bird landed at the side of the road and was clearly injured, she pulled over.

The gull was stunned and one wing was lying at an awkward angle. It had hit the car with such force that it actually damaged half the grill below the bonnet.

Donna would have been forgiven for just getting back into her car and driving on, cursing her luck for having damaged her car at a time of year when pennies are scarce. But in keeping with the Christmas spirit, she bravely picked up the huge bird and put it in the car.

And when you have a injured bird, who ya gonna call? The Andersonstown News, of course – at least that’s what the guy driving behind her recommended. The office was just up the road, and Donna brought her stricken gull there looking for advice.

Dúlra was called and asked what could be done. People often think bird organisations will send an animal ambulance to the rescue – but the truth is that bird injuries are so common that they would be overrun. In the past Dúlra has nursed injured birds back to health in his home – but never with a bird as big as a seagull – you’d need to order a bigger turkey just to feed it! And a box of fish while you’re at it.

And so Dúlra decided that in an emergency like this, he would refer up – and there’s no better expert than west Belfast birding supremo Aidan Crean.

There are few bird emergencies that Aidan hasn’t dealt with. He advised that it would be safest and best to bring the seagull back to its own kind and also that it would be best to release it on water where it won’t be in danger from foxes or cats. The Half Moon Lake would be perfect, he suggested, because it’s like a beacon for seagulls and ducks.

And so Donna drove back down the few hundred yards to the mini-nature reserve hidden among Lenadoon’s houses. The seagull was in a box in the boot – and as soon as she opened the boot and the bird got a sight of the water, it jumped straight out and on to the lake.

There it floated on the water as if nothing had happened, the only sign of the dramatic events of the previous hour was that one wing was hanging slightly lower than the other. On the Half Moon, it will have plenty of company from other gulls and you’d hope there’ll be plenty of marine life for it to feed on and build up its strength.

And this festive good deed got even better – because this is no normal, everyday gull – its speckled head gives it away. Its name is a misnomer – it’s called a common gull, faoileán bán in Irish – but ironically it’s far from common. It breeds on a few islands and cliffs on our west coast, but in winter more arrive in from Scandinavia and the Baltic.

It travelled perhaps a thousand miles to arrive in West Belfast – and thanks to some brilliant Yuletide hospitality after a freak accident, it hopefully will be fit enough to some day return.