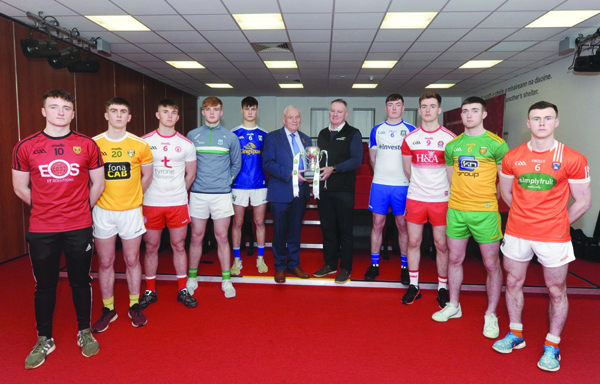 Representatives from the various Ulster counties, including Antrim’s Aaron McNeilly, were present at the launch of the Ulster U20 Football Championship at the Tyrone GAA Centre at Garvaghey earlier this month along with Ulster GAA president Oliver Galligan and Fergal Keenan from competition sponsors EirGrid.

ANTRIM U20 manager Hugh McGettigan feels the grade would be better served by a return to the old U21 format as the Saffrons prepare for their quarter-final clash with Derry at Dunsilly on Saturday.

The revised 2020 calendar has already come in for sustained criticism from several quarters with several competitions, including the U20 Football Championship and the Sigerson Cups, starting earlier in the year.

Last year, Antrim played Down in the Preliminary round of the Ulster U20 Championship with the game acting as a curtain-raiser for the Ulster SFC final between Donegal and Cavan in Clones in June.

Yet, a condensed schedule has caused problems with a number of players still having to juggle county and college commitments.

While Aghagallon’s Adam Loughran is the only U20 player on the Antrim senior panel, McGettigan believes more can be done to relieve the pressure on young players.

“It is very difficult to get things up and running. Last year, we started in January and we ran all the way until June,” stated McGettigan.

“This year, it has taken us a long time to get organised and you are right in the middle of league games and the Fresher Championship.

“The best thing would be to make it an U21 competition again and run it in March, the traditional time for it.

“Have it that no U21 player can play senior football so you’d cut out all the problems with players moving up and down.

“You could have the university competitions in January and February. At the minute, you’ve too much of a draw on too many players.”

Loughran is one of the rising stars in Antrim football and made his senior debut in the Dr McKenna Cup game against Down, coming off the bench to score five points.

His clubmate Jamie Lamont is also part of the U20 squad with Rossa duo Eoghan McMenamin and Cormac McGettigan expected to feature against Derry on Saturday along with St Brigid’s attacker Rory Brolly.

However, Antrim will be without Conal Bohill (St John’s) who suffered a broken hand while playing for Queen’s hurlers against Tyrone in the McGurk Cup before Christmas. Ballymena’s Eoghan Daly is also currently sidelined with an ACL injury.

Antrim’s Leo Murphy Cup campaign saw them record a surprise win over Down sandwiched between defeats to Tyrone and Louth, but McGettigan was satisfied with how their preparations have gone for their Championship opener.

“We lost our first game to Tyrone then beat Down before losing to Louth. It was a bit up and down,” added the Rossa clubman.

“We had a good performance against Down and played well for large periods against Louth. We were trying players and the games came very quickly.

“We recovered well after a poor start against Tyrone and I think it is better to have some sort of a league before the Championship, whereas before you did all the training for maybe one game a year.”

Derry already have one game under their belt after Mickey Donnelly’s men overcame Fermanagh after extra-time in Celtic Park last Saturday.

Played during Storm Ciara, the Oak Leafers set up a clash with Antrim following a hard-fought 1-13 to 1-8 win.

“The extra-time added to the occasion, but conditions were treacherous,” added McGettigan, who was in attendance at Celtic Park.

“Credit to both teams – the performances were exceptional in the conditions. Some of the scoring was phenomenal.

“Maybe extra-time shouldn’t be played and a replay would have been fairer, but I don’t know how that would have affected the scheduling.

“It was hard to judge because it really was a game of two halves. Derry had the majority of the play in the second half and they got their noses in front in extra-time.”

It remains to be seen how much extra-time will have taken out of the Derry players and, with further bad weather forecast, a heavy pitch at Glenavy is all but certain.

Antrim have tended to punch above their weight at underage level in recent times, but they will need another top-class performance if they are to land a knockout blow against Derry this weekend.