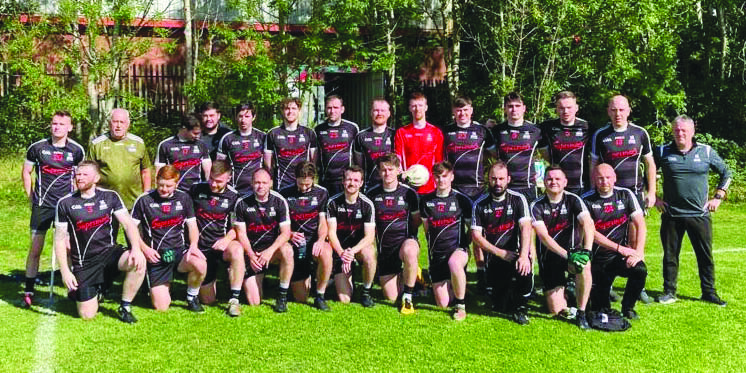 TIFFY Quinn thought he’d be taking an extended break from football management after leaving his native Errigal Ciarán following the 2019 campaign. That was until St Agnes’ enquired if he’d be able to take a punt on them for the 2020 season.

With nothing for either party to lose, Quinn decided he’d coach the West Belfast junior side, but the Covid-19 pandemic meant their progress was halted.

When things resumed for the 2021 campaign, Quinn was back at the helm alongside Aggies’ legend Roy McLarnon and they are preparing their side for Sunday’s Antrim JC semi-final meeting with St Comgall’s at Glenavy.

Quinn spent four years with Errigal as part of Pascal Canavan’s management team, during which time they suffered county final defeats to Omagh in 2017 and Trillick in 2019, losing by two points on both occasions.

Having also been part of Carl McCabe’s management set-up during his later years with St Gall’s, Quinn insists that the commitment of the current St Agnes’ panel is as good as he as encountered anywhere during his coaching career.

“I was with Errigal Ciarán for four years with Pascal Canavan and I thought I was done with football after the Trillick defeat,” said Quinn.

“We daughter works in Belfast and some of the St Agnes’ fellas had asked her to see if I’d manage them. We were going well last year in the league when Covid brought everything to a halt. We then lost out to Ballycastle in the Championship and it was a funny year.

“It wasn’t a fair year so, when I was asked to come back, I was glad to give it another crack. I loved worked with St Gall’s, they were class lads, and these boys are the same.

“If you said to these boys training is at 6pm or whatever, it is no bother to them. Sometimes country lads, the likes of Errigal and that, would find that difficult because they are working all over the place. A lot of the Belfast lads are based around the city.

“Things have been first class and they are great lads to train – they give it everything to be fair.”

In recent times in the Junior Championship in Antrim, teams who lose out in the finals tend to come back stronger.

Lisburn lost out to Con Magee’s in 2018 and also to Sarsfield’s in 2017 before finally getting over the line against Ardoyne in 2019 with the Kickhams then winning last season against St Comgall’s.

The Antrim men have been luckless when it comes to the business end of the season having also the 2014 final to St Malachy’s and the 2016 decider to Glenravel.

They’ll fancy their chances of progressing to another final this weekend, but Quinn is adamant that there is little to separate the remaining four teams in the Junior grade.

“It is going to be a tough ask, but if you look at the league semi-finals, there wasn’t much between any of the teams,” said Quinn.

“You’d St Comgall’s, Rasharkin, Pearse’s and Lisburn and there were only a few points between the teams in the semi-final and final.

“St Agnes’ have beaten Pearse’s. Now, we lost to Rasharkin by seven points earlier in the Championship, but we were short a few that night. Rasharkin seem to be strong enough, but I don’t think there is much between the sides.

“Autumn football is a different game than the summer game. You’ve a damp pitch, heavy sod, a wet football and the games aren’t as high scoring. You’ll see that in the county finals and Ulster club games in the coming weeks.”

Quinn added that Aggies’ will have a full panel to pick from with a few players who are currently teaching in England available to return home for Sunday’s last four battle.