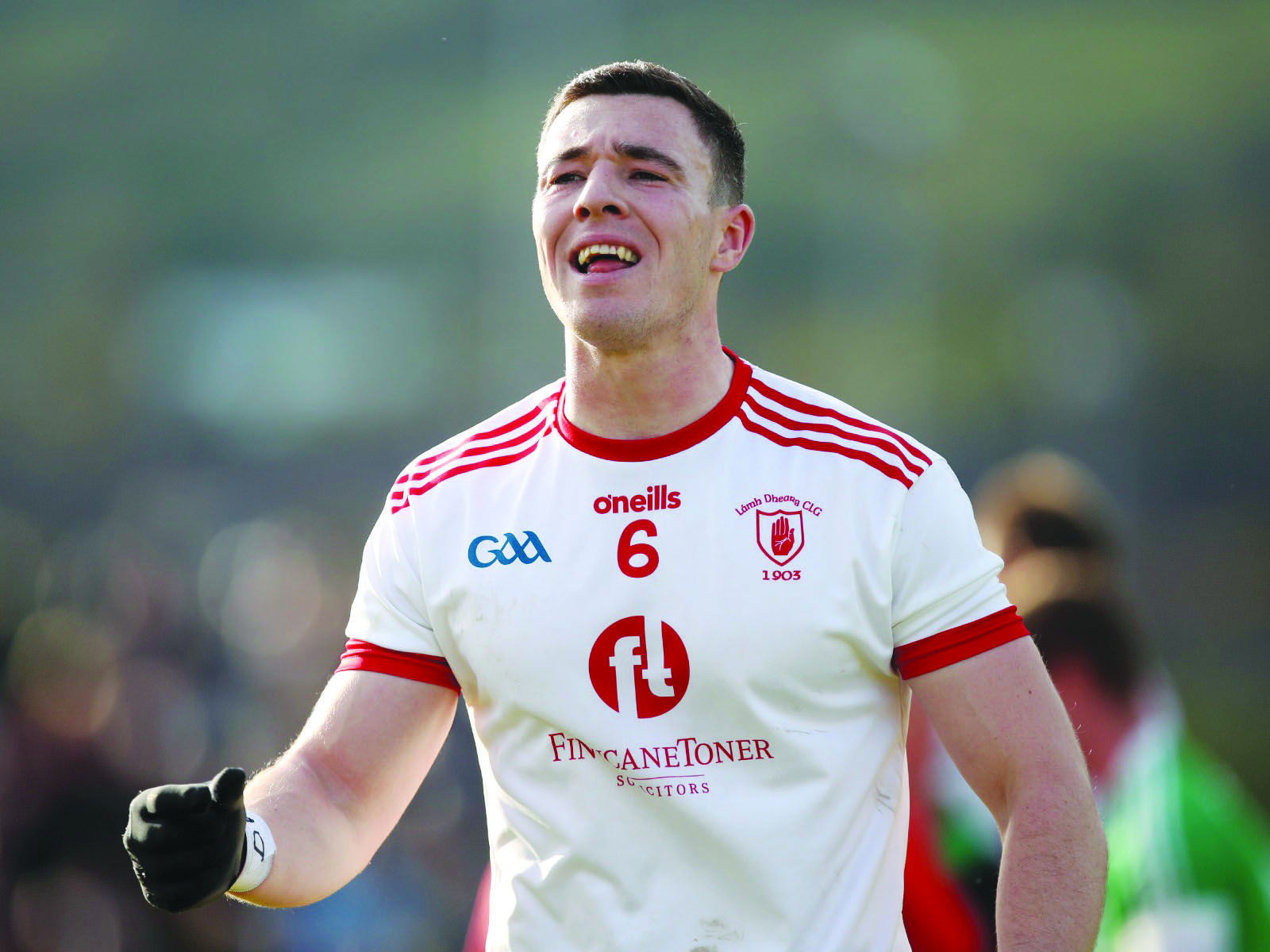 IT might be seven years since a team other than Cargin or Lámh Dhearg lifted the Padraig McNamee Cup, but Declan Lynch believes there are a host of genuine contenders for this year’s Antrim Senior Football Championship title.

Although a return date for Gaelic Games remains unclear at present, the Antrim county board took the initiative to do the various Championship draws live earlier this month.

The pairings certainly generated debate across the county with fans and players alike eagerly anticipating the return of sport in the coming weeks and months.

Indeed, recent renewals of the Antrim Senior Football and Hurling Championships have been breath-taking with the introduction of live streaming last season only serving to bring the games to a wider audience.

Yet, Cargin have been the dominant force in the Senior football ranks in recent times and they’ll be certain to give another good account of themselves this season.

Lámh Dhearg’s 2017 success followed back-to-back wins for the Toome outfit, who then completed a hat-trick of titles last September following their extra-time win over neighbours Creggan.

While Lynch and his teammates have been on the wrong side of some thrilling battles with Cargin over the last few seasons, he says that at least half a dozen other teams will fancy their chances this season.

“The Antrim club draws certainly gave people a wee boost. We’ve no start date yet, but the draws have reinvigorated the club scene again in Antrim and has people talking,” said Lynch.

“I don’t believe it is a two-horse race and I’m sure Cargin would say the same.

“There are six or seven teams, maybe more, who rightly believe they have a massive chance of taking the Championship trophy home.

“Aghagallon could have beaten us last year. St John’s, under Paddy Nugent, came close in 2017 and it was nip and tuck between us. He plays a style of football that will suit St John’s.

“Cargin are still the team to beat, but the likes of St Gall’s haven’t gone away either.

“You’d be a fool to right them off. You also have the likes of Portglenone and Creggan knocking on the door, so there are a group of teams who feel they have a chance.

“You only have to look back at last year’s Ulster Championship. Nobody gave Cavan a chance so you could have a leftfield team coming to win it. Every team will feel they have a chance in the Senior Championship.”

Lámh Dhearg have been drawn in Group Three along with familiar foes Aghagallon as well as Aldergrove and Naomh Éanna – both of whom will have new men in charge for the 2021 campaign.

Armagh’s All-Ireland winning full-forward Ronan Clarke will be over Aldergrove this season while former St Gall’s boss Carl McCabe has taken over from Frank Fitzsimons at Hightown.

The top two teams in each section will qualify for the quarter-finals and Lynch believes Lámh Dhearg cannot afford to underestimate their opponents despite being strong favourites to progress to the last eight.

“In term of our draw, we have a tough group,” said Lynch.

“Yes, we’ll still fancy our chances of getting out of the group.

“In the Championship game against Aghagallon last year, I don’t think we played well and we were lucky to come out with a win.

“Aghagallon produced a massive performance and, if I’m being honest, they probably deserved to win the game on the day. I think maybe a bit of experience got us over the line in the end.

“They are now a year more developed and mature, and it will be two tough games against them.

“You also have St Enda’s, who reached the All-Ireland Intermediate final a few years ago. They have another year of Senior Championship experience under their belt. They are now managed by Carl McCabe and he has been there and done it with St Gall’s.

“They have serious talent and they’ve four or five boys on the county panel and they are all pushing for starting berths.

“They are a fit, young team who will be knocking on the door in the next few years. They’ll fancy their chances of making the breakthrough at senior level soon and rightly so.”

He added: “Aldergrove is a bit of a local derby for us. They’ve Ronan Clarke in and he has won everything in the game as a player.

“He is a very highly-rated coach and he is an All-Ireland winner with Armagh so it will be interesting to see how Aldergrove go this year and we are under no illusions about how tough the group will be.”

Despite another nail-biting Championship slog with Cargin last summer, which resulted in a narrow semi-final defeat at Hightown, Lynch believes the Red Hands will be raring to go to the well yet again in the pursuit of another SFC title.

“We’ll be ready for whatever is thrown at us. We have a good panel and we have failed to deliver over the last few years,” added the Antrim skipper.

“We lost a final replay after extra-time in 2019 to Cargin and lost to the winners again in the semi-final in 2020.

“We aren’t too far away, but we need to go again and make that breakthrough – we can’t keep hitting the crossbar.”

Meanwhile Lynch has hit out at Congress for bringing in rule changes aimed at cracking down on cynical play in hurling and football.

Earlier this month, delegated voted in favour of Motion 20 by 61 per cent to 39 per cent, despite the Gaelic Players Association being opposed to the Motion with outgoing president John Horan among those seeking a deferral on the vote.

Referees now have the power to award a penalty for a foul which denies a clear goal-scoring opportunity within the 20-metre line or arc with the offender shown a black card and ordered off the field for 10 minutes. Additionally, a sin-bin will also be trialled in hurling.

Although Lynch’s sole focus is on his football commitments these days, he was part of the Lámh Dhearg side who completed an Antrim and Ulster Junior Hurling Championship double in 2016 and he says the game of hurling doesn’t need tweaked and should be left well alone.

“Touching anything to do with hurling should be a no-go,” stated Lynch.

“Hurling is as fluid a game as you’ll see. If you are going to start introducing new rules, you are starting on a dangerous path. Everyone loves watching a game of hurling on a sunny day and they should leave it as it is and not tamper with it.

“It is change for the sake of change. I just think they are slowly, but surely starting to rip apart the game.

“How do you deem something cynical? Where do you draw the line between clinical and clumsy? If you trip or trip into someone on your way down, is that cynical?

“I think it is giving referees seriously more work when they don’t need it. I think it will lead to frustration. I hope it doesn’t last longer than a trial run.

“It is beyond me how referees are meant to police that. When you watch games on television during the All-Ireland series, you are nearly shouting at the television calling for a black card when certain decisions aren’t given as a black card.

“It is like the advanced mark in football - it is a good idea in theory, but it isn’t playing out as it was intended.”