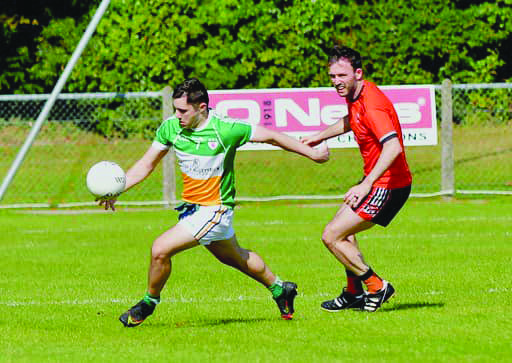 A PLACE in the final of the Antrim Intermediate Football Championship is on offer at Dunsilly on Sunday when Davitt’s face Dunloy.

Both sides scored eye-catching wins on the road in the quarter-finals with Dunloy accounting for Aldergrove, while Davitt’s enjoyed a three-point victory at Glenavy to continue what has been a very good season for the Falls Road men.

Goals proved the difference on the day for Sean McKenna’s side as Tony McGrattan and Marcus Toner netted to upset the odds and they will again be outsiders for many against a Dunloy side that has consistently been involved at the business end of the competition over the past number of years.

Yet the underdog tag did the West Belfast men no harm at all against Glenavy and they were worthy winners according to their manager, with the manner of performance the most pleasing aspect as his side aim to take what would be a massive step in their development.

“I thought we deserved it and from start to finish we were the better side,” McKenna reflected.

“They had their 10-minute spell when we went down to 14 men, but I think in the second half especially we were very solid.

“We gave no goal chances away and they managed to create very little, forced them to shoot from wide out and that worked for us.”

Dunloy are laden with quality players and many of Antrim hurling’s high-profile names are equally adept with the big ball.

Keelan Molloy, Conal Cunning and Nigel Elliott have all shone throughout the campaign as they bounced back from an opening round loss to Sarsfield’s to qualify from their group and then sounded warning that the elusive Intermediate title remains firmly in their sighs with that victory at Aldergrove.

They have plenty of pedigree in this competition and the club’s hurlers enjoying a bye into the semi-finals will have given the football preparations as boost as Davitt’s played in a Junior quarter-final last weekend.

Yet it seems all came through unscathed and will be ready for action on Sunday with Padraig McParland’s recovery from injury to play a starring role against Glenavy another big boost for the city side.

“There is no doubt everyone is going to have Dunloy as favourites,” McKenna accepts.

“When they have their full contingent out on the pitch they are a fantastic side. Over the past six or seven years I think they have been in four Intermediate finals and have yet to win one.

“We know what we are up against but I would like to think they will know we’ll be no pushovers either. It will come down to whoever wants it the most and that team will come out on top. Hopefully it’s Davitt’s.”

The Falls Road club had made little headway in the championship in recent years, but that has all changed as they are now just 60 minutes away from an Intermediate final.

Add in a very solid league campaign where they finished third in Division Two and it is clear the trajectory they are on.

Regardless of the outcome this weekend, they will have made huge strides this season, but there is no desire to see the journey for 2022 end now and they will be keen to score another big win.

Dunloy is a greater challenge than Glenavy, but momentum can be a wonderful thing and with both sides coming in on the crest of a wave, they will both feel they have what it takes to reach the decider.

“One of the points some the lads made (at the start of the year) was that they had never won a championship match in a few years and now we have finished third in the league and into the semi-final,” McKenna noted.

“We have as good a chance as anyone to progress, so it’s great for the lads.

“There was a great buzz after the match and even this week at training, so I hope that continues this week.”