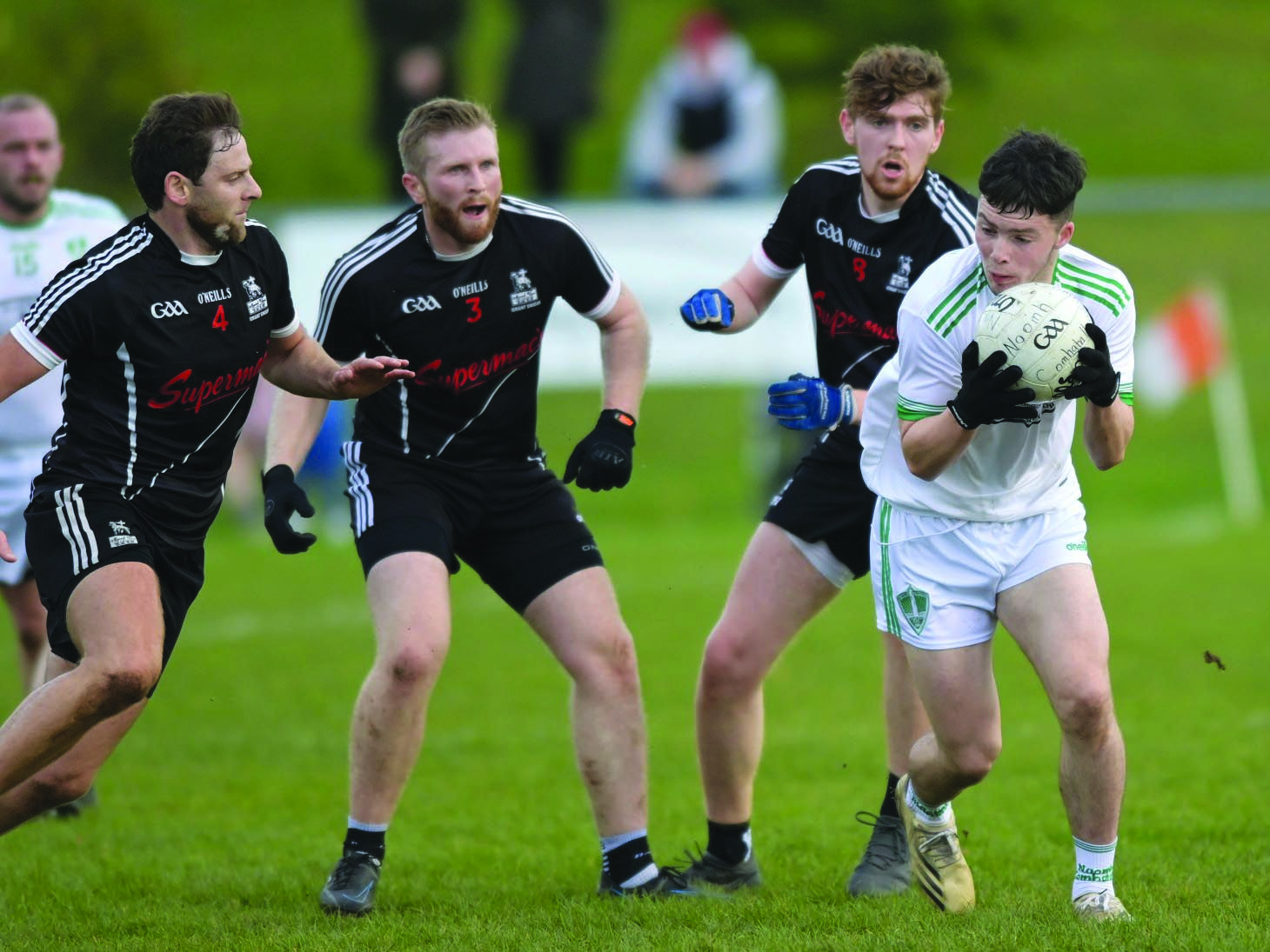 ST COMGALL’S advanced to another Antrim Junior Football Championship final after overcoming the challenge of St Agnes’ at Glenavy on Sunday.

The Town, who lost last year’s decider to Ardoyne,  led 2-10 to 1-3 at half-time and had enough in reserve to keep their opponents at bay in the second half.

It was St Agnes’ who got off to the better start, however, and Brian Crossan gave them the perfect start with a goal on four minutes with St Comgall’s replying with a point from Ruairi Higgins with five minutes on the clock.

This score seemed to settle the Antrim town side and Caolan O’Loan got on the end of an excellent build up to fire to the net and put his side ahead on eight minutes with Paddy Quinn following with a point as St Comgall’s found their stride.

The Dunsilly men were starting to get on top and Caolan O’Loan added his second followed by James McCabe as the traffic towards the St Agnes’ goal began to flow.

Dylan Murdock followed from a pointed free as St Comgall’s began to pull away from the Andersonstown men.

Tom Patchett opened his own personal account with another point just before the water break to leave St. Comgall’s 1-6 to 1-0 ahead.

Even at this early stage it was hard to see a way back for St Agnes’ who had played second fiddle during the opening quarter.

Ronan Carroll landed a much-needed point for his side on the restart, but St Comgalll’s hit back in devastating fashion with a real peach of a goal from Patrick O’Connor to reassert their dominance on proceedings.

St Agnes’ were still battling hard to get their own game going and Ronan Carroll sent over a brace of points before Tom Patchett converted a free at the other end on 28 minutes.

The Antrim town side continued to enjoy the majority of the play and James McCabe added his second point of the afternoon to extend their lead with Ruairi Griffin adding another.

Patchett concluded the first half scoring to leave St Comgall’s in a strong position, leading by 10 points at the break.

The Aggies needed a good start to the second half if they had any ambitions of hauling in their rivals.

However, it was the Antrim side who were first on the scoreboard in the second half when Patchett pointed after just 30 seconds.

Conall Turley replied with a point to get Tiffy Quinn’s side off the mark in the second half and Conall Turley added another on 45 minutes to conclude a rather uneventual third quarter.

To their credit, St Agnes’ battled hard to get back into contention in the final quarter and pushed the opposition hard.

Yet, some last-ditch defending by St Comgall’s coupled with their second goal saw them run out six-point winners, although they had goalkeeper Anto Watson to thanks for an excellent save right at the end.