Antrim on the road to replicating Dublin’s success 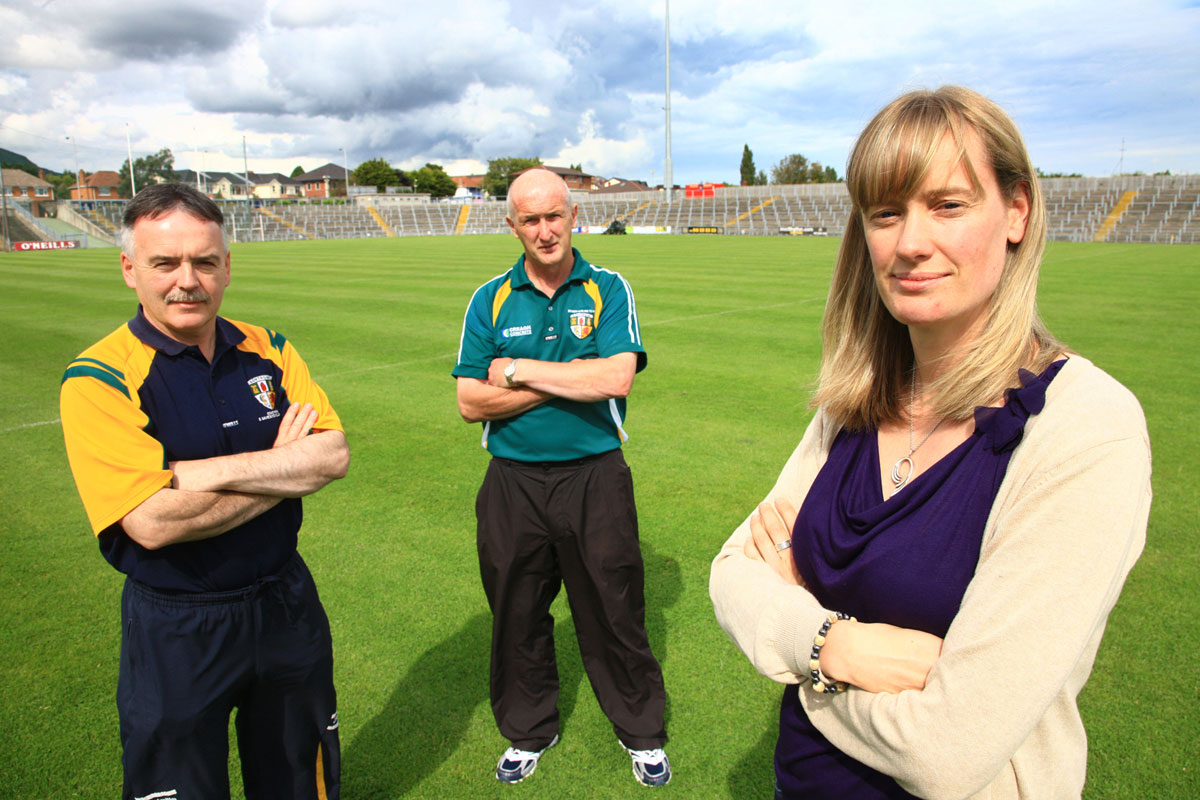 THERE has been a lot of soul searching required in Antrim hurling circles lately. Heavy defeats at minor (v Galway), U21 (v Dublin) and senior (v Limerick) this year has filled many supporters of the camán code with despair.

Just 12 months ago, Dinny Cahill’s senior side recorded Antrim’s first senior Championship win at Croke Park since that glorious day against Offaly in 1989 when they defeated Dublin in the All-Ireland Qualifiers.

This result, and the subsequent battling display against Cork offered hope that Antrim’s fortunes were on the rise.

One year later and the tables have turned. Dublin have since gone on to claim the National League title and were just two pucks of the ball away from an All-Ireland final appearance, while their minors and U21s will contest All-Ireland finals against Galway.

That has led hurling fans the length and breadth of the country to look to the capital for inspiration on how to revive their own fortunes.

Antrim is no different in that regard. Already the cries have been loudly heard to follow the Dublin model. However, that process is already under way.

Walking in through the players’ entrance at Casement Park on a Thursday afternoon and the usual sights and sounds associated with visits to the home of Antrim GAA are absent.

There are no players out on the field or roars from the tunnel. Instead, a helicopter rests on the pitch while the only sound from under the stands is those of fingers bouncing off keyboards in the office across from the dressing rooms.

Three sets of these fingers belong to people who are entrusted in pointing the way forward for Antrim hurling to arrest the decline in performances and results over a number of years.

The Donegal woman came to Belfast after completing a Masters Degree in Sports Psychology having spent her previous years in Dublin.

While in the capital, Ciara joined up with the Ballyboden St Enda’s club before taking up the role of Games Promotion Officer for Dublin GAA.

After just two months in the job she was appointed Regional Development Manager in 2005 and it was during this time that the Dublin hurling revolution really began.

At the time, there was little by way of a structured process, but by starting from the bottom and working up, Dublin eventually began to see a change in fortunes thanks to a vision and hard-work.

“When I started with Dublin in 2004 there was a lot wrong with Dublin hurling,” revealed Ciara.

“There was no activity from under 11. The development squads weren’t great and the game structure was poor. When we started out it was about getting the correct structures in place. The most important structures were establishing the nursery programmes at clubs on a Saturday morning and setting up a club-school link.

“A big problem was that coaching was happening in the schools but it wasn’t being followed through with the clubs.

“The club-school link meant that the GPO was coaching in the club’s feeder schools during the day and then coaching with the club’s underage teams that night for a six to eight week period.

“In 2006 they did a review and 470 coaches attended hurling workshops in Dublin.At the time nobody knew where it was all going but they had a vision and the right people behind it and have achieved through sheer hard work.”

The former DIT student brought with her the ideas and policies from the capital and from these foundations have come a plan to replicate the success of Dublin here in Antrim. Ideas have included forging a club-school link (it has been found that in some schools 85 per cent of school children do not belong to a GAA club), developing a system of play that suits Antrim hurling as well as upskilling and educating mentors.

However, when Ciara first took on the role at Casement Park, obstacles were encountered including mentors who were uneasy at buying into the project and not having full control of coaching staff in Antrim.

While some have argued that Dublin’s revival has been simply about money and funding (approximately €6m has been invested in Dublin hurling), the Antrim CGDO argues that money is of little use without the correct structures to invest it wisely.

“The difference in Dublin was that we had main control of our GPO’s where in Antrim we had seven who were employed by Ulster.

“There are so many different types of staff and it’s hard to link in with the one objective at times because in Dublin we had full control to develop and implement a plan.

“There is no point throwing money at things if the structure isn’t there. We rely on our volunteer base and without them there is no future. In Dublin you had all the stakeholders moving forward together so we are trying that with Antrim.”

It is agreed that a major obstacle is the lack of paid coaches, so for Antrim hurling to succeed, a full buy-in from the clubs, schools and mentors is required if progress is to made.

Another area that has been targeted is getting children involved in the game from a much earlier age.

“Five years ago there was no such thing as nurseries in Antrim,” said Kieran Megraw.

“We tended to wait until 11 or 12 before we brought kids in and developed their skills. That was a problem as we were already behind when it came to skills development.”

Dominic McKinley agrees with this assessment and went on to say that a greater number of coaches are required to help spread the hurling gospel throughout the county.

He believes that schoolteachers have a huge responsibility to ensure that a love of the sport is nurtured and the club-school link is vital to this process.

“You need to go into the schools and marry it all up,” said the former Antrim boss.

“I would go to a school and look at a P5 or P6 class for example, then after I leave I would be hoping there would be more children of that age going into clubs.

“If not then I would ask the club why they are not targeting that age group to bring more into the club.”

The Antrim project is gathering momentum and despite initial scepticism from some parties, most are now starting to see the value of the proposals and are buying into the plans. The idea of ‘coaching workshops’ for coaches where they can learn new methods have become a huge success.

“In 2010 we ran 13 club foundation hurling courses and there are now 182 accredited coaches,” said Ciara.

“We had four Award 1 courses since October 2010 which 60 coaches attended compared to 72 in Dublin in 2006 when they first started. Considering Dublin has around twice as many juvenile clubs that is great and these courses are really taking-off with our coaches gaining in confidence.

“Education is the way to go in Antrim and everyone seems to be buying into it.”

Some argue that too many clubs exist – especially in Belfast – with lack of games and competition a reason for the decline in fortunes.

While McKinley agrees with this argument saying amalgamation is a matter of ‘when and not if’ this will happen, the counter argument offered is that with a hugely untapped playing pool, the club-school link can flood clubs with players if properly exploited.

Each club has been allocated two-to-three schools and Megraw says this gives them a potential pool of 600 to work with.

Paul Doherty,  the former Antrim footballer from Rasharkin, and John Crossey, the current Antrim minor hurling manager, oversaw the ‘Urban Project’ that ran throughout Belfast this summer in an effort to tap into the huge number of potential hurlers that exist in the city.

This explosion of young hurlers is one major factor why Dublin now finds itself producing impressive results and is seen as key for Antrim’s growth.

There are other areas for improvement in Antrim, and all three agree that a structured fixtures programme at underage level is vital for a number of reasons.

With Antrim now having assembled development squads from under 14-17, the lack of all-county cohesion when it comes to fixtures makes it much tougher to organise sessions with these players.

“I would employ somebody full-time to look after county fixtures, especially at juvenile,” said Ciara.

“When we met the Dublin clubs back in 2006, the big problem was lack of games.

“We knew we couldn’t start to tackle soccer on a Saturday morning until we got our house in order.

“The clubs thought we were absolutely crazy but we ran our Go Games on a Saturday morning. It took a couple of years but now it is where it should be.

“The Bórd na nÓg in Antrim have now started putting that programme together and hopefully this time next year, we will be a couple of months into having regular games. It’s not just for the players but the mentors as well.

“Even for the development squads; they need to know when they can get together from the start of the year.”

Antrim have now been involved in the Leinster Senior Championship for three years and most commentators agree it has been a worthwhile exercise. However, it is felt that for Antrim’s fortunes to improve, underage teams – school and county - need to compete in Leinster also.

A combined Dublin Colleges team – started in 1994 –has been competing in the Leinster ‘A’ Colleges Championship and gradually improved to the point they became All-Ireland champions in 2006.

During the life of this experiment, Dublin lifted a Leinster minor title in 2001 and in recent years have started consistently winning trophies in Leinster.

It has been shown the Combined Colleges team has led Dublin hurlers to grow up with no fear of supposed illustrious opposition, something that Antrim hurling could benefit from.

Moving forward, all three agree the future is indeed bright for Antrim followers even if the summer of 2011 suggests otherwise.

McKinley and Megraw argue that with the right training, structures and belief, the players on Antrim development squads can mature into quality hurlers that can compete with the best.

From Ciara Ferry’s view, Antrim - while behind Dublin at present - are certainly on the right road.

Already, mindsets have been changed for the better and that is perhaps the biggest hurdle to overcome if Antrim are to move forward.

While Antrim fans will have to be patient for now, the Letterkenny woman is convinced brighter days are ahead.

“When I was in Dublin, people were asking when it was going to improve as they were getting hammered left, right and centre. The key was to start with the fundamentals to initiate change,” revealed Ciara.

“What Dublin did seven years ago was to put structures in place and Antrim have, since we got involved three years ago, started to get those structures here too.

“It’s a slow process but we lack the manpower of Dublin.

“There has been a positive change in the mindset in Antrim and Belfast in the past two years.

“When I first started my role, I was talking to clubs about nursery programmes and they thought I was a lunatic, but that has changed.

“If you come back to us in five years time then we would be expecting to have produced quality players that can compete at the top level.”

There is no doubt that hard work and determination to succeed is a feature of all three Antrim hurling development officials.

Dublin’s hurling revolution is happening and the challenge now is to make sure that Antrim follow suit.

As I leave Casement Park, the overall message I assimilate is that Antrim’s resurrection is dependant on everyone playing their part.

I also notice the helicopter has gone from the pitch. Perhaps this will not be the only thing taking off at the home of Antrim GAA in the future.