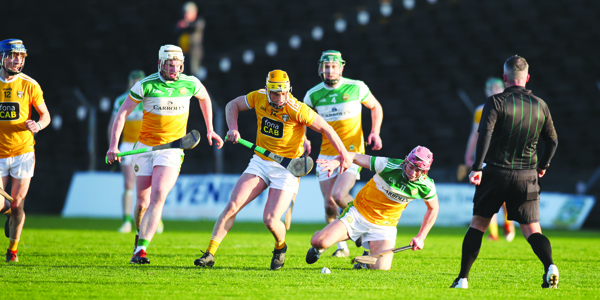 WITH two wins and four points already banked, the ascent becomes a little steeper for Antrim’s hurlers as they get set for Sunday’s trip to face Offaly in Tullamore.
It is a rerun of January’s Kehoe Cup final that went the way of the Faithful County following Oisin Kelly’s late winner gave them a one-point victory that probably flattered Antrim.
On that day, Michael Kavanagh’s charges shot an eye-watering 18 wides and really should have been out of sight when Antrim mounted a late comeback that almost saw them snatch the trophy, so there is much improvement needed ahead of Sunday’s crunch fixture.
With the shadow boxing of pre-season done, this game has a lot more riding on it, especially for Offaly whose defeat to Kerry in their last outing means they have no more room for error if they want to maintain a push for promotion.
It’s not dissimilar to when the counties met in last year’s Joe McDonagh Cup that resulted in a thrilling win for the Saffrons that kept their hopes alive of reaching the final, so they won’t travel to O’Connor Park with any hang-ups this weekend.
They also go in having won those opening games against Wicklow and Mayo, while Saturday’s draw against All-Ireland champions Tipperary will have done no harm heading into a crucial run of fixtures.
“The first two games, we were on a hiding to nothing,” admitted team selector Gary O’Kane after Saturday’s challenge game against Tipp at Davitt Park.
“We were expected to win them and if we didn't then it would be put down as bad performances.
“It all comes back to the pitches. That one today was firm and the ball was moving on it.
“The last two pitches were not good to be playing hurling on. We have three games now against Offaly, Meath and Kerry we simply have to win.
“It gets to this stage now where it's do or die for everyone.
“It's very similar to the Joe McDonagh last year when we went to Tullamore and had to win.
“The Meath game will be the same and Kerry will be tough, but this is a big game against Offaly because they'll have all guns blazing.”
Last weekend’s outing against the Premier County (was a hugely productive afternoon for Darren Gleeson’s charges as all available got game-time, while they also welcomed back several players from injury including Ciaran Johnston and David Kearney.
The performance of James McNaughton who landed 2-3 in attack is another positive ahead of the trip to Tullamore with Antrim putting up a very healthy 2-23 against Tipperary at the weekend.
While is may have been a friendly, there was still a little bit of an edge to the game and the fact that Antrim got in front and stayed there until late as they went score-for-score with the All-Ireland champions was a huge plus and will boost confidence this week.
“Today was about getting our team right for the League next week against Offaly,” O’Kane agreed.
“We'd a few boys coming back from injury so we had the chance to give boys game time and getting them up to match speed.
“In terms of that, it was a very good exercise. It didn't matter what team they put out; they're still All-Ireland champions and we matched them blow-for-blow.
“Even in the second half, every time they scored we scored so we're more than happy with that performance.”
Offaly hurling has been in freefall somewhat having suffered consecutive relegations in the Championship that will see them in the Christy Ring Cup this year, while they also find themselves in 2A in the League.
The job for their manager Kavanagh, a multiple All-Ireland winner with Kilkenny, is to steady the ship and begin to get them moving back in the right direction.
In many ways they haven’t helped themselves and their defeat to Kerry two weeks ago highlighted that as they spurned what looked a comfortable position in the game, while the dismissal of Cillian Kiely didn’t help their cause.
They still have some quality hurlers with Eoghan Cahill their main score-getter, while Liam Langton, the towering Sean Cleary and Brian Duignan – who found the net in the Kehoe Cup final – can all be a handful.
Antrim will approach this game knowing they can’t allow Offaly the same time and space they gave up last month as it is unlikely they will have another miserable afternoon in front of the posts.
The Saffrons will travel to the midlands quietly confident they can repeat their victory of last summer and take a huge step towards the league final.