Antrim prepare to roll the Déise 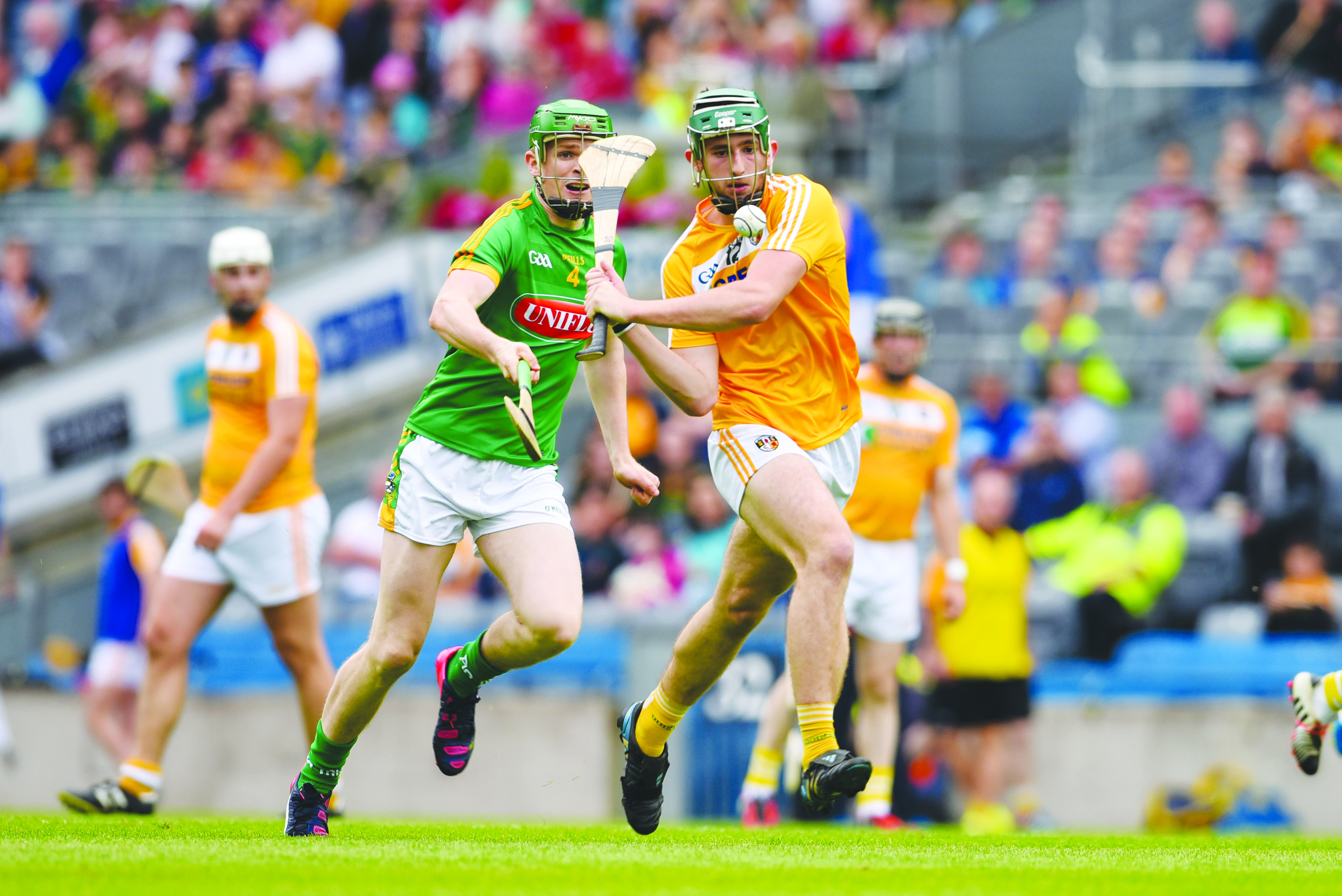 Antrim U21s have been boosted by the return of senior panelists James Connolly, pictured in action during the Christy Ring Cup final against Meath, and Ryan McCambridge ahead of Saturday’s All-Ireland U21 semi-final against Waterford in Thurles

ANTRIM face the onerous task of trying to halt the charge of Waterford’s U21 hurlers when they meet in the semi-final of the All-Ireland Championship in Thurles on Saturday (4pm, live on TG4).

The Munster champions are long odds on for All-Ireland glory as they bid to add the U21 crown to the All-Ireland minor crown from 2013.

That they hammered Antrim 4-20 to 1-9 in their minor quarter-final in 2013 only serves to highlight the enormity of the challenge facing Ollie Bellew’s side this weekend.

Indeed, several of the Waterford side were involved in last Saturday’s epic Senior Championship semi-final replay defeat to Kilkenny at Semple Stadium. Austin Gleeson, who looks a shoe-in for an All Star, Conor Gleeson, Shane and Stephen Bennett all started against the Cats while Paul Curran and Tom Devine came off the bench.

Despite the strength of the opposition, Bellew insists he won’t deploy spoiler tactics to try and curb the influence of Waterford’s key men.

“We are under no illusions about where we are. We have had a tough year in the county,” said Bellew. “We don’t have a senior manager in place at the minute whereas Waterford have Derek McGrath, who is probably the most progressive manager in the game at the minute.

“He has turned the fortunes of Waterford around and that’s right through their teams. “With the U21 squad, their performances have been second to none.

“I have picked a squad full of good, honest hurlers and there is no point in me going out to deploy a couple of extra men at the back to go for an honourable defeat.

This time last year, Antrim were in a similar situation. Faced with the challenge of Leinster champions Wexford, the Saffrons crowded their defence and claimed a face-saving 12-point defeat. Wexford boss JJ Doyle blasted Antrim’s tactics labelling the game as ‘the most negative’ he had ever witnessed.

Bellew was part of Kevin Ryan’s backroom team last year but is adamant those defensive systems won’t be utilised against the Déise.

“I was part of that set-up and contributed to how we went about it,” said Bellew. “The game was played in such a way in order to keep the score down as much as possible.

“It was negative and I have never been from that school of thought. It isn’t the way you’re brought up to play hurling. You’re brought up that, if they score one, you go back and score two. I don’t want to be a part of anything that goes down the route of the football at the minute.

“At the same time, you have a duty to try and contain a team that is as good and as dangerous as Waterford. “It isn’t for me to go for an honourable defeat. I don’t like them, I don’t believe in them.”

He added: “We have got the best club Championship in the country and clubs produce players to a good standard. When they are playing for their clubs, they go out and attack anybody.

“We are by no means underestimating the job at hand but I want to see Antrim hurlers going out and playing as best they can.”

Prospects Antrim’s prospects for Saturday’s All-Ireland semi-final have been boosted by the availability of Ryan McCambridge and James Connolly. The duo played no part in the Ulster Championship campaign due to travelling and holiday commitments respectively, but both are available for selection this weekend.

“The only problem is, towards the end of the Ulster Championship, we found a bit of rhythm. “They are two lads you would find hard to leave off any team so we will have to make a judgement call on it.

“Paddy Burke is back hurling again so it seems to be coming together a bit.” The return of McCambridge and Connolly is tempered by injuries to defenders Cathal McMullan and Ruairi Diamond, both of whom are likely to miss Saturday’s last four clash while James McNaughton and Sian McGrath are out long-term.

Bellew admits Antrim’s preparations have been far from ideal with the club Championships in both codes in full swing. “We were brought in at the last minute, just before the Ulster Championship and the clubs had their programs all underway,” said the Antrim boss. “

It has been a turbulent year for the county so we didn’t try to ride roughshod over the top of that. “We got the boys together on an ad hoc basis whenever we could.

“In all honesty, preparations could have been a hell of a lot better but we have a panel of good, honest hurlers who knew we were up against it from day one. “Any sessions we are getting with the lads are very light.

“At the same time, there are good preparation being done with the clubs. We have got the best clubs in the country and we can trust that they are getting a good standard of hurling when they are there.”

Antrim’s U21 manager also believes his players won’t be daunted by the prospect of playing against a side who beat them so comprehensively at minor level three season’s ago. “Our players know they are good enough to beat anybody anyway,” added the St Gall’s clubman.

“We always perform to the highest standards at college’s hurling, at club level. “We are always there or thereabouts. It is these hurlers – they are all young and fresh. “I haven’t mentioned Waterford once. I am just looking to get the best out of the boys.

“Their parents have raised them well and their clubs have made them into the players they are. “I just want them to go and show what they can do. No matter what you say to them, you have to be realistic.

“They boys have watched the U21 series themselves. They know how tough it is going to be but they are full of belief and self confidence too. “Getting it all to come together as one unit is the biggest challenge on Saturday.”

It is difficult to envisage anything other than a facile win for Waterford in Semple Stadium this weekend. Antrim are littered with fine hurlers but they struggled for long periods to see off a physical Derry side in the Ulster final in Loughgiel.

Ultimately, the Saffrons came good in the second half to win by four points but they can ill afford such a sluggish start against the Munster champions. Waterford’s senior panelists will be hurting from their narrow loss to Kilkenny at the same venue last Saturday but this weekend’s semi-final offers them a quick chance to get that defeat out of their system. Antrim must brace themselves for a backlash at the home of hurling.

Ollie Bellew says he isn’t into so-called moral victories but getting within a dozen points of this Waterford side would achieve just that.