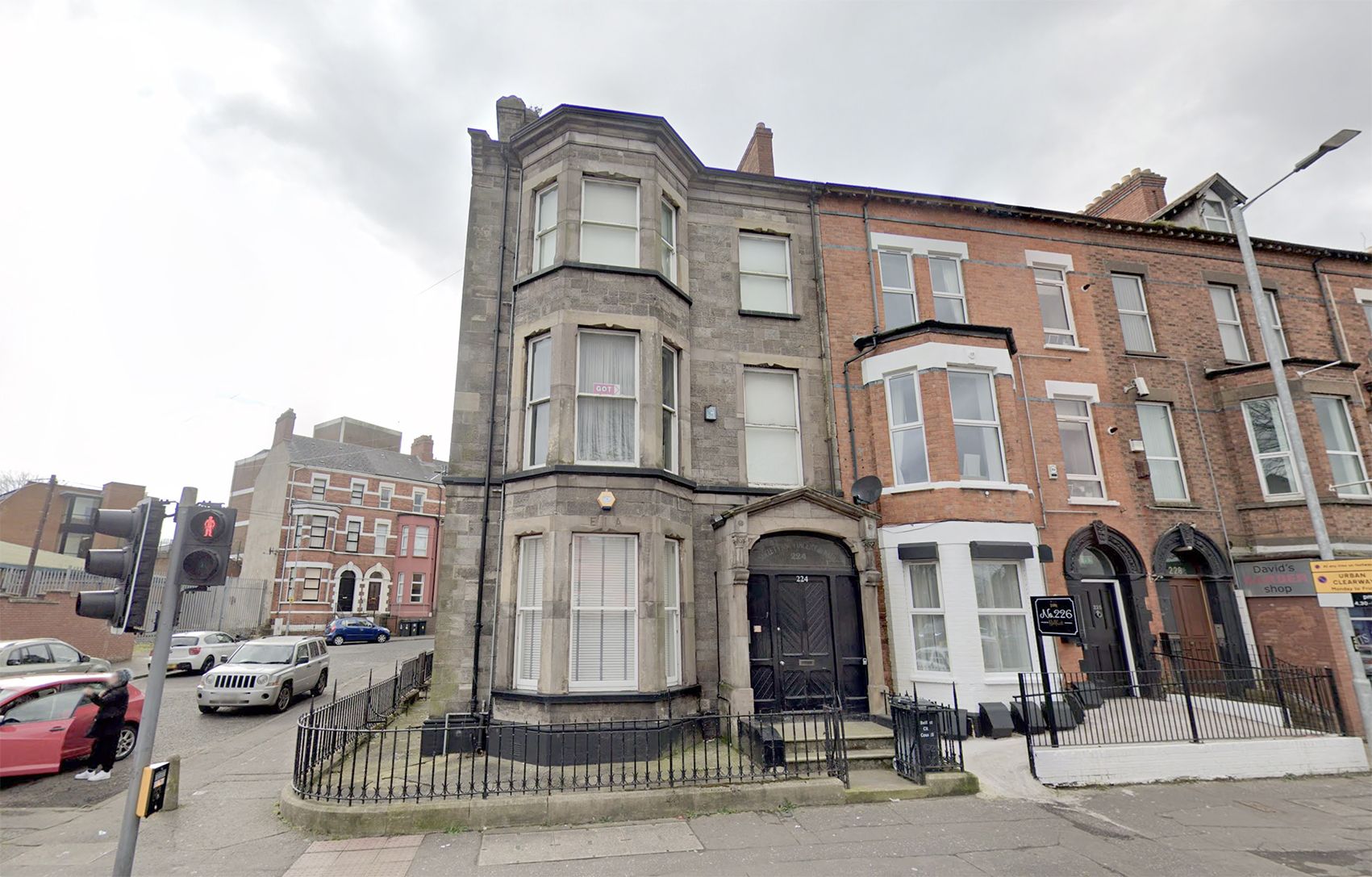 TITLED FOLK: Eia House at the junction of the Antrim Road and Eia Street – there’s a number of explanations as to how the building and the street got that unusual name, some romantic, some more prosaic

THE Antrim Road is now one of the main thoroughfares of Belfast and may in the future be a route for the Glider, or ‘bendy-bus’, but, then again, the Shore Road may be preferred.

The road began as a narrow country lane, becoming just a footpath nearing Pinkerton’s Row, which was extended as the New Lodge Road and linked up at Oldpark  and Solitude with the Old Lodge Road. From the primitive Antrim Road, by-lanes branched off to the left to Vicinage and Dr Bruce’s Farm, known as ‘The Farm’.

At Vicinage (now St Malachy’s College) lived Tom McCabe, the watchmaker and fearless patriot, who famously opposed slavery. He was a compatriot of Henry Joy McCracken and was also  involved in the cotton industry. Interestingly, the name Vicinage connoted nearness to the town of Belfast, while not too far away Solitude suggested remoteness.

Next to Vicinage was The Farm. This was acquired by Reverend Doctor William Bruce, minister of the First Presbyterian church and Principal of Belfast Academy. His estate was extensive. In the 1830s the new Crumlin Road cut through Dr Bruce’s estate and the sale of ten acres for the construction of Crumlin Road Gaol almost recouped the total price he had paid almost twenty years earlier.

Dr Bruce retired to Dublin and his son, the Reverend William Bruce, succeeded him at The Farm. He in turn was succeeded by his brothers Samuel Bruce, Town Solicitor, and Harry Bruce. Their sister, Jane Bruce, died at  The Farm in 1933 aged 101 years.

The Farm was then sold to the prison authorities and the house was demolished in 1936. Thorndale, where Duncairn Avenue is now, had earlier been built for other members of the Bruce family and it  became the home of James Bruce DL, who was the chief director of Dunville’s, one of Ireland’s leading whiskey producers. James was a flamboyant man. With his interests in Dunville’s and other manufacturing firms he acquired the Wingfield estate in Benburb, County Tyrone, establishing himself as a country squire. Here he built a new manor house designed by architect Harry Lynn, who designed Campbell College.

The residents of the Antrim Road were treated to a spectacle in early summer every year as Bruce’s horses, resplendent in  silver and polished leather trappings, their hoofs striking sparks from the stones,  paraded in cavalcade from the Antrim Road to Great Victoria Street Railway station. The Squire of Thorndale, accompanied by over a dozen horses, six grooms and many servants, would board a privately-hired train. They would disembark at Trew and Moy station and parade the seven miles to Benburb, again watched by  the local residents.

The village is also home to the impressive Benburb Castle, built in 1611 by Sir Richard Wingfield on the ruins of a military fortification constructed by Prince Shane O'Neill, circa 1558, at the base of a limestone cliff overlooking the River Blackwater, the border between County Tyrone and County Armagh.

James Bruce died in 1917 without any children. Thorndale later became a Salvation Army Hostel while the Benburb estate was bought by the Catholic Clonfeacle parish in 1947, later to become Benburb Servite Priory.

Much of the land above Bruce’s Farm was owned by the Macrory family. It is said that in the early 1800s it was bought by the solicitor Macrory from the Donegall family – who were almost broke – for £2,000. The Macrory family prospered and in 1859 Adam Macrory donated the site for Duncairn Presbyterian church.

It was intended that the development of this part of the Antrim Road should be upmarket. Eia House at the junction of Eia Street, was built in Scrabo stone. However, the cost was prohibitive and the adjoining houses were constructed in Belfast red brick.

The origin of the little word ‘Eia’ has been one of the Antrim Road’s eternal enigmas. Billy Gillen says it's the only Street name that people spell rather than pronounce. When the buses first had the announcement system installed, Billy asked a driver how to spell Eia. The driver got it right but refused to spell ‘Ligoniel’, giving Billy a version beginning with F.

I've been told that it was the symbol of the Macrory family’s hospitality – “Enter In Again”. Others say it was a combination of the first letters of the Christian names of the three Macrory daughters. Eia House was built in the 1870s by Robert A. Macrory, a Trinity College Dublin lawyer on ground gifted to him by his cousin. It’s  said that in gratitude he adopted the name ‘Eia’ which was translated from Latin, ‘He permitted.’

I have no doubt that there are many other explanations as to how Eia Street was named.