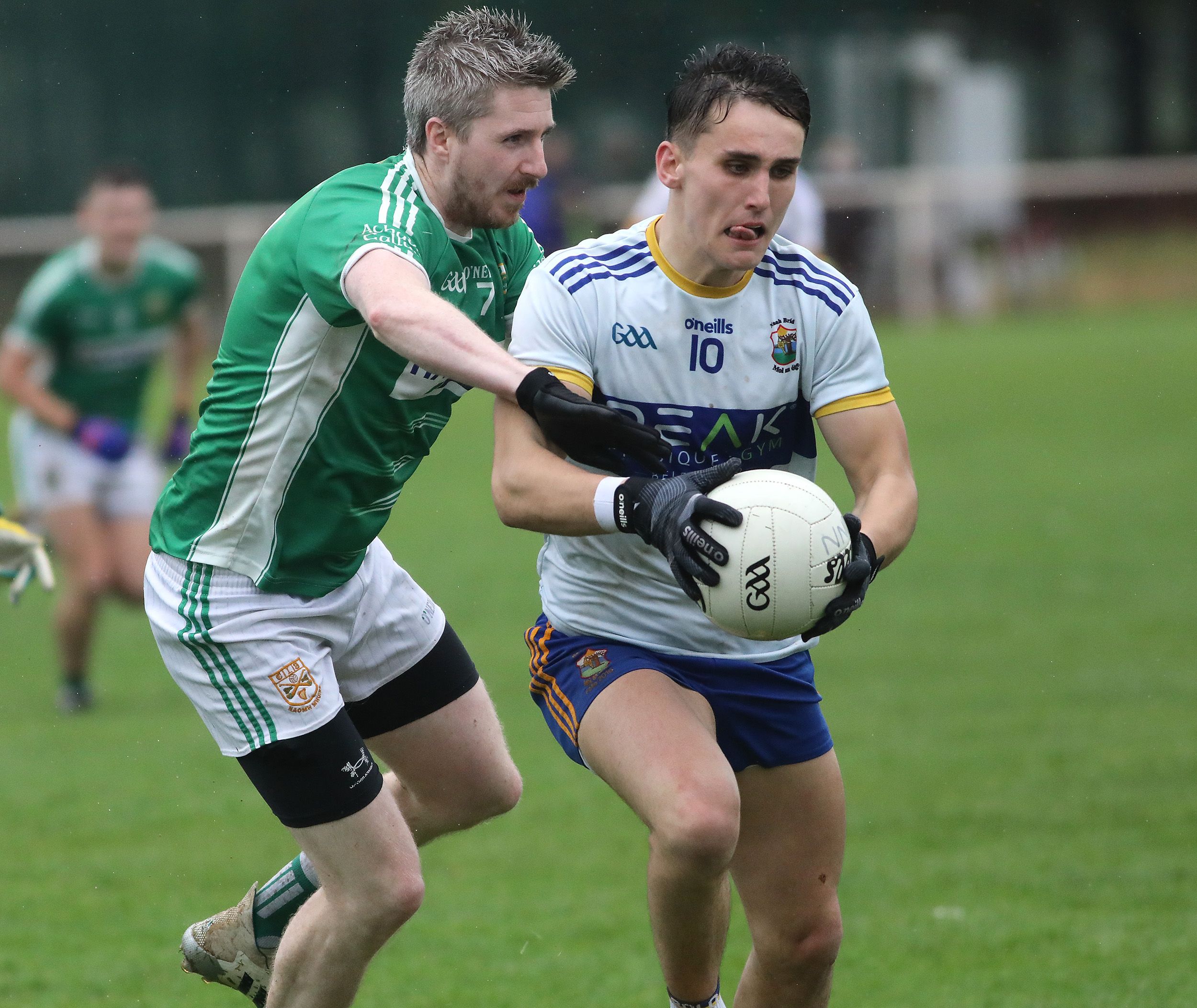 Northern Switchgear Antrim Senior Football Championship quarter-final
St Mary's, Aghagallon 0-14 St Brigid's 0-7
IT was a case of repeat rather than reverse at Hannahstown on Sunday as Aghagallon defeated St Brigid's in an Antrim SFC quarter-final for the second year running.

Last year's runners-up put in a fine second half to completely take over and pull clear as they adapted better to the poor conditions.

Rain poured throughout this game, resending the ball a bar of soap and the size five probably felt more like a size 15 as long-range shooting became difficult with shots dropping, while it skited off the surface and made any type of fielding impossible.

Yet the St Mary's outfit found a way to get the ball into their attack and did enough to create scoring chances as the city side lost their way in attack after a decent start to the second half when they drew level.

This was not a day for champagne football but doing the simple things well and Aghagallon did that much better, laying down a marker early with the impressive Eunan Walsh thumping over from the right within the opening minute.

Highlights and analysis will be on the Live Stream starting at 3.20pm from @KickhamsCreggan v @RossaGACBelfast pic.twitter.com/RqbPg50DIL

St Brigid's did make pretty decent headway in the opening quarter and drew level with Conor McAleer kicking a free and edged ahead from another McAleer free in the 13th minute.

Joe Finnegan then claimed a mark when using his strength to get on the ball despite being well marshalled and he converted before another McAleer free suggested this might be a good day for the South Belfast men.

However, Aghagallon would find a way to get into the game with Gareth Magee curling over a free to end a barren 21 minutes and this saw them kick on with Magee repeating the trick and then David McAlernon shooting from deep with the shot tipped over by Declan Heery in the St Brigid's goal.

They weren't done for the half just yet and would take a 0-5 to 0-4 lead into the break as they put together an excellent move that was finished off by Padraig Gowdy whose movement saw him get into space and he produced a finish to match.

Aghagallon would enjoy a bright start to the second period too as Ruairi McCann - stationed at the edge of the square - displayed great strength to get his hands to a long delivery, breaking and gathering himself before turning and scoring.

St Brigid's were in need of a response and they found one as Conor McAleer mopped up a breaking ball to swivel and slot between the posts, while half-time substitute Peter Webb got onto another break to curl over and level the game at 0-6.

This would be as good as it would get for St Brigid's, however, as Aghagallon took a firm grip on this game with Gareth Magee edging them back ahead reform a free, while Eunan Walsh kicked a magnificent point with a free from deep that felt like a big moment.

Magee would have a brief sight of goal but he was crowded out, yet would add another couple of points from frees with Ruairi McCann then getting another point off a break.

Another long-range free from Eunan Walsh in the 55th minute extended the gap to six and this game was as good as done as St Brigid's were not requiring goals that just didn't ever look like coming.

They did pull one point back through Fergal Meenagh from deep, but they were needing so much more and Aghagallon would finish with a flourish as Enda McCartan pointed off a counter-attack and a late Jonathan Hannon score would complete a good afternoon for Aghagallon who will face another rematch in the semi-final where they will meet Portglenone in a repeat of last year's epic.