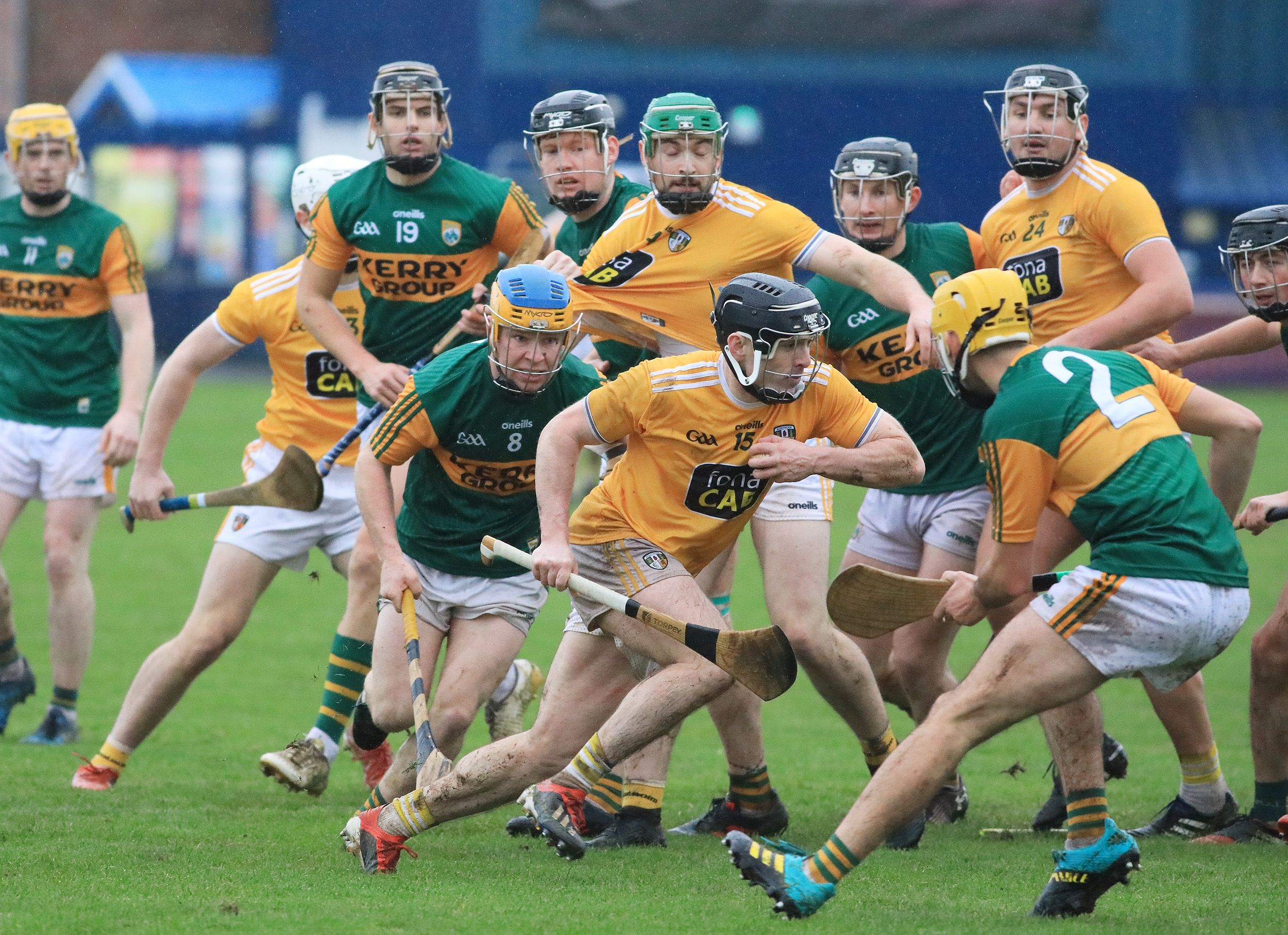 THREE goals in the first half proved decisive as Antrim took a huge step towards the Joe McDonagh Cup final with victory over Kerry at a wet and windy Corrigan Park in Belfast on Saturday.

Team captain Conor McCann banged home the first two majors with Michael Bradley netting the third for the Saffrons and whilst Kerry did rally well, they were unable to get to within five as Antrim kept the scoreboard ticking over in the second period.

The Kingdom will rue a few missed goal chances including a Shane Conway penalty that went wide, but they just couldn't press on after making a good start to the second half.

"When they got the (first) goal they got a penalty chance and that was a big point in the game," said Antrim manager Darren Gleeson.

"After that miss, we rallied again and I thought new showed a good bit of composure at that stage.

"Again, in the second half when it happened and they got their purple patch, we came back really well. That's a good measure of the boys and the leadership on the team.

"When they knew the (bad) weather was coming in, they knew they were coming here to work. If you work and earn the right to play, then you will get the scores and that's been the simple mantra."

On a day that required hard graft as-well-as guile, Antrim made a dream start playing into a strong wind and driving rain as James McNaughton broke clear, fed Joe Maskey who in turn popped to McCann to crash low to the net in the opening minute.

Kerry replied with the ever-dangerous Conway pointing followed by another effort from Mikey Boyle, but Antrim were that bit crisper in their play with points from Keelan Molloy and Ciaran Clarke preceding their second goal that mirrored the first as another McNaughton break resulted in him passing to the captain and again, McCann made no mistake.

Points from Shane Nolan and Conway kept the Kingdom in touch with the latter then slaloming through the Antrim defence and lobbing towards the net, but his effort was cleared by Phelim Duffin.

Antrim pressed on with McCann, Clarke, Dan McCloskey and Michael Bradley all raising white to leave them 2-6 to 0-4 ahead at the water break, but after Kerry point, it would get even better on 25 minutes when Bradley took a clever low pass from Eoghan Campbell in his stride and burst through on the left to crash high to the net.

Clarke added a pair of frees as the Saffrons threatened to run riot, but Kerry were right back in the game five minutes from the break as Conway gathered well, fed Mikey Boyle who offloaded to Daniel Collins who finished low to the net.

Less than a minute later, they were awarded a penalty when Boyle was adjudged to have been bundled over, but Conway's low shot flew the wrong side of the left post.

The sides traded frees before Kerry had another goal chance. This time Padraig Boyle, minus his hurley, was in but his kicked effort was gathered and cleared with Clarke tapping over another free to leave Antrim 3-10 to 1-6 ahead at the half.

Kerry needed a fast start to the second period and they got it as Daniel Collins drove over a point and on 38 minutes, Conway showed good control to take the ball down and lash low into the net.

He added another point straight after as the gap was now down to five, but Antrim rolled up heir sleeves and got back into their stride as Kellan Molloy landed a fine score to settle them.

Conor McCann, Clarke and a brilliant effort from Bradley followed with Kerry staying in touch thanks mainly to Conway, but they couldn't really get close enough to mount a challenge in the final quarter as Antrim outscored them by four to three with Clarke (two) Molloy and McCann all on target.

Kerry would finish with 14 players as Fionan Mackessy was shown red for an off-the-ball incident in stoppage time, but the game had been settled as the Saffrons moved to the top of the group with one game to play, leaving Kerry needing a result in their final game against Carlow next week.

"I didn't see what happened there at the end (for the red card) but it was a powerful, physical game and there will be boys who will be fierce sore tomorrow," added Gleeson.

"When you are laying the same team over and over, it is difficult but the motivation is high. Our motivation is to progress and that's what we managed to do today."