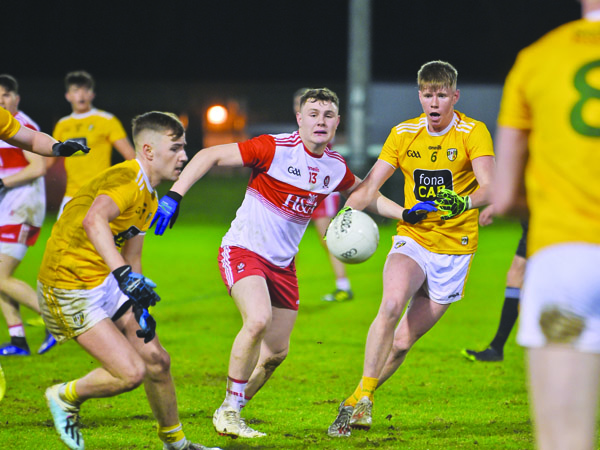 A LITTLE over a week on from a famous victory over Derry, Antrim face another huge task as they bid to reach the Ulster U20 Football Championship final at the expense of a fancied Tyrone side.

The Red Hands were the inaugural winners of the All-Ireland U17 competition back in 2017 when under the guidance of former Tyrone All-Ireland wining midfielder Collie Holmes.

Several of that team, including Antoin Fox, Matthew Murnaghan and Darragh Canavan, have progressed to Paul Devlin’s U20 side.

However, Tyrone needed extra-time last Saturday to see off the challenge of Armagh in difficult conditions at the Athletic Grounds before eventually prevailing by four points.

Antrim boss Hugh McGettigan was in attendance at the Armagh city venue last weekend and was suitably impressed by what he witnessed, especially the impact of Darragh Canavan – who is the son of Red Hand legend Peter.

“They were very impressive. The conditions were similar to what we faced against Derry,” said McGettigan.

“People might look at the score and think it wasn’t up to Tyrone’s usual standard. In the underfoot conditions with the wind, you’d two teams going at it.

“Tyrone played with 14 men for so long and coped really well. They then were able to bring in (Darragh) Canavan to combine with Tiernan Quinn in the forward line and they looked a potent force.

“Canavan caused problems every time he was on the ball – he really is a chip off the old block as far as movement and ability is concerned. He seems to be the next in a long line of fantastic forwards to come out of Tyrone.”

While Tyrone edged out their neighbours after extra-time, the biggest result from the quarter-finals was, undoubtedly, Antrim’s 1-9 to 2-4 win over Derry at The Dub last Friday night.

While McGettigan felt his side rode their luck at times, he praised the commitment of the Antrim squad, but feels more will required to overcome Tyrone this weekend.

“We were very relaxed going into the game, I don’t know about begin confident, but we knew we had a decent team,” said McGettigan.

“In the time we’ve had since the start of January, we’ve put in a lot of work and we’ve played a lot of matches. There’s a great attitude among the boys.

“On another night, those two goals would have scuppered us – that’s something we don’t want to be doing against Tyrone!

“Pat Shivers was the target man and got us out of trouble in the first half and he set the tone for our performance and you’d guys like Ronan Gribbin and Eamon Kelly who also had big games.

“We played Tyrone earlier in the year and they beat us by 10 or 12 points so we know it will be a real uphill struggle.”

Antrim’s 2019 U20 Championship ended with a 1-16 to 0-11 defeat to Down in Clones last summer, but the Saffrons were badly hampered by a series of injuries in the build-up to the game.

McGettigan is hopeful that the latest injuries to his squad aren’t anything serious.

Already without the services of Conal Bohill (broken hand) and Eoghan Daly (ACL), the Antrim boss is sweating on the fitness of the aforementioned McEnhill and goalkeeper Luke Mulholland, who were both unable to finish last Friday’s game against Derry.

McGettigan is optimistic that the duo picked up cramp and minor strains in the difficult playing conditions, rather than anything more worrying.

Antrim simply cannot afford to be under-strength for what is already a difficult task. It is hard to ignore the fact that Derry hit 20 wides at The Dub last Friday night.

If Tyrone are more efficient in front of the posts than their Sperrin rivals, they ought to confirm the league form with an Antrim side who will have lost the element of surprise after their heroics against Derry.