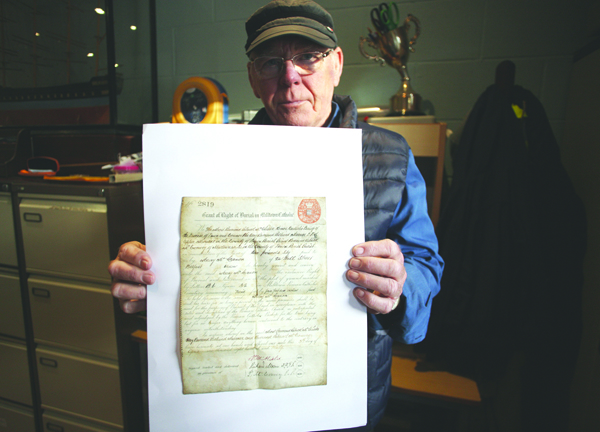 LOCAL HISTORY: Frank Dempsey with the document which dates back to 1830

A NEAR-200-year-old lease for a plot in Milltown Cemetery has been uncovered in Carrick Hill.

Frank Dempsey from the Carrick Hill Residents’ Association found the fascinating historical treasure during a recent search of the association’s archives.

The legal document. written on parchment paper and dated April 5, 1830, details a right of burial agreement between the Down and Connor Diocese and a Mary McLarnon of 24 Hall Street.

It came into the possession of the Carrick Hill Residents’ Association during a community exhibition in the late eighties, but with the owner never returning for the document, it has been kept in storage ever since.

The plot may currently be occupied by members of the McLarnon family or could, possibly, still be claimed by any of its surviving members.

Speaking about the find, Mr Dempsey said: “I was browsing through some of the old stuff we have in the office when I found it.

Mr Dempsey said that while the document is an interesting part of Carrick Hill’s history, he would like to see it reunited with its rightful owners.

“I’m sure the family would like to have the document,” he said.

“It’s a piece of their family history. It’s something that they might not be aware of – going back that length of time – that they might have a grave with relatives in it.”

If you think you might own, or think you know the owner of the document you can visit the Carrick Hill Residents Association, or call 028 9023 1602.