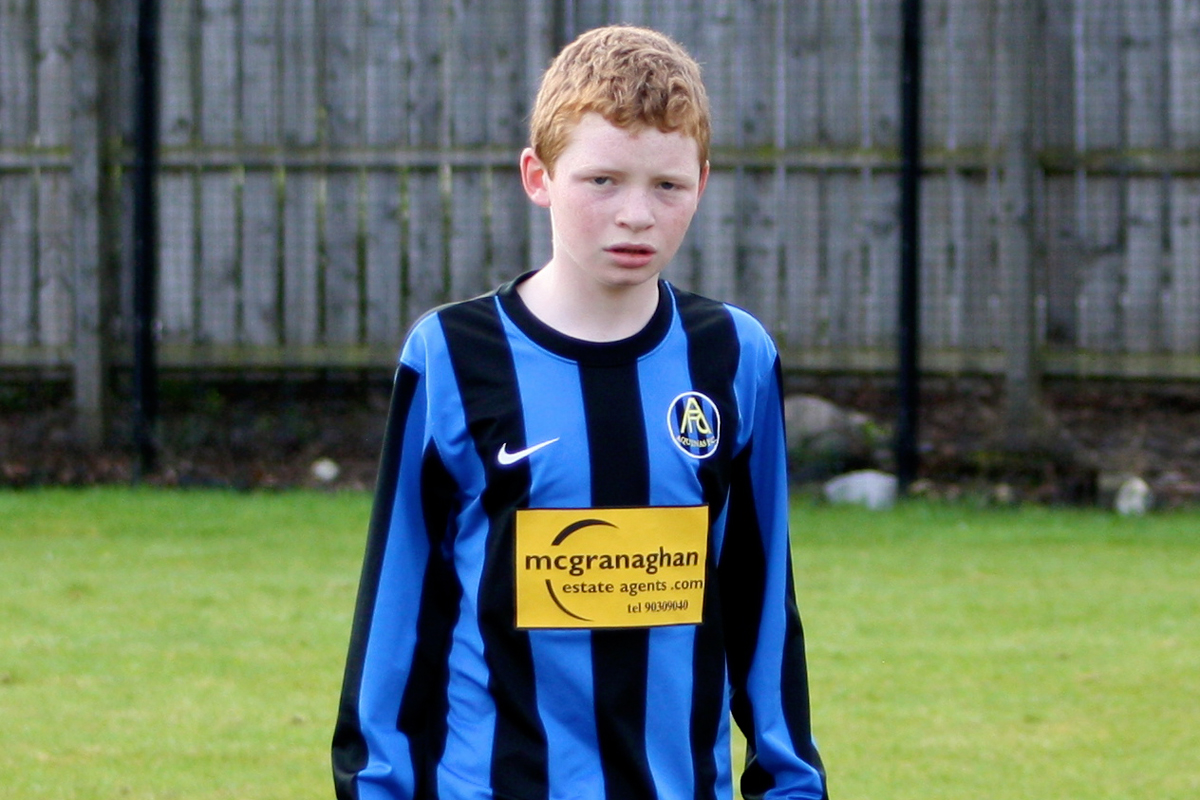 Aquinas trudged away from the Olympia Leisure Centre with bewilderment etched all over their long faces on Saturday as they tried to work out how they had no points to show for all their efforts in this compelling match, which turned so dramatically against them in three mad second half minutes.

In a tight opening there was little evidence of the goalfest that was to follow as the teams tried to out pass each other on the slick 3G pitch.

Aquinas struck first when good work by Dan Rainey and Conor Flynn saw the ball worked to Tom Maguire whose stinging effort was parried into the path of Matt Hughes who finished coolly with his left foot.

The Blue ’n‘ Blacks settled into a good rhythm with Paddy O’Boyle and Cormac O’Hanlon going close to doubling the lead with good efforts from distance.

On 33 minutes Maguire showed again what a top class striker he is with a spin and low drive into the corner after a sumptuous 40-yard pass from Hugh O’Connor at right back.

Aquinas were far from able to coast though, as Immaculata were a constant threat on the break and from accurate set pieces.

It was from the latter route that they halved the deficit, on the stroke of the break, after some hesitancy in the Aquinas rearguard.

Just after the restart, Aquinas re-established a two-goal cushion when Ciaran Mohan slotted home a penalty after Hughes, who was a constant menace for the ‘Mac defence, was shoved over in the box.

The following 20 minutes would turn out to be the calm before the storm for Aquinas as they protected their lead well, with Kevin McGovern looking assured in nets and Caolan Lynch and Niall McCourt solid in front of him.

The deluge began with a lobbed finish from a loose ball in the box before two converted spot kicks, in an amazing 60 seconds, turned the scoreboard completely on its head.

To their great credit, Aquinas dusted themselves down and went in search of an equaliser.

Conor Toner and Matt Carson’s pace on the flanks almost created something for Conor O’Doherty on a couple of occasions before Hughes agonisingly struck the woodwork with a free-kick from 25 yards.

Joe Cunnane and Thomas Cafolla drove the team forward but as time ran out it was Immaculata who broke away to round off the scoring and bring the Blue ’n‘ Blacks’ ten game winning streak to an abrupt end.