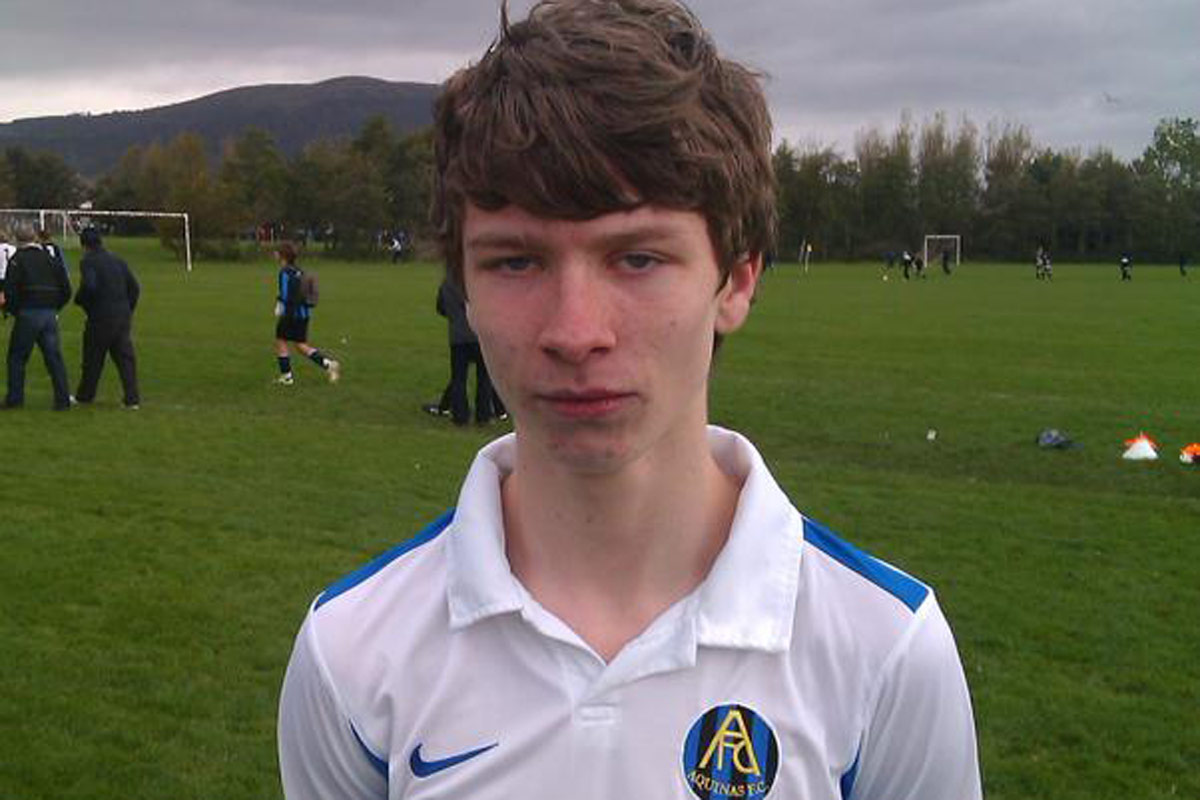 Since they first faced off in 2005 there have been many memorable encounters between these two teams but surely none can have come close to matching Saturday’s game at a blustery Shore Road, which sparkled and crackled as every good derby should.

Hugh O’Connor fired just over from distance and Niall McCourt’s flying header drew the first of many fine saves from Roses stopper Nugent.

It didn’t take long, however, for the match to ignite with two quick-fire strikes in just four minutes either side of the quarter hour mark. First Matthew Colaluca poked, previously unbeaten, Rosario in front after a good stop by Kevin McGovern fell kindly for him.

The advantage was very short-lived as Aquinas almost immediately restored parity when Tom Maguire, who terrorised the Rosario defence throughout, rounded Nugent to slot home after a beautifully clipped ball from Conor Flynn.

The equaliser triggered a bit of a purple patch for the Blue ‘n’ Blacks as they noticeably grew in confidence and stature.

Matt Hughes again brought the best out of Nugent after great work from Paddy O’Boyle on the right and Ciaran Mohan and Matt Carson were just off target with set pieces.

The dominant spell was to come to an abrupt end just before the break with a hotly contested penalty award, which resulted in centre half Conor Francis restoring the lead for Rosario.

The sense of injustice, though, seemed to fire Aquinas who enjoyed much territorial advantage but, despite the promptings of Peter Morgan and Philip O’Sullivan, they couldn’t muster an equaliser.

As the game wore on the clever running of Conor Toner gradually began to create more space in the attacking third for Aquinas and, as the game entered its final quarter, it began to look like something had to give.

And give it did. Not once but twice in two stunning minutes during which Aquinas completely turned the game on its head.

The leveller followed another unbelievable save by Nugent, who somehow got down to his left to keep out an acrobatic volley from Hughes, but could only watch as Maguire reacted first to gleefully fire in the rebound.

Before anybody had a chance to draw breath, Aquinas sensationally took the lead when livewire Conor O’Doherty popped up in the six-yard box to capitalise on another rebound to coolly pick his spot in the bottom corner.

The job was by no means done for Aquinas as Rosario threw everything at them in the closing stages but some heroic defending by Dan Rainey and Caolan Lynch saw Aquinas deservedly squeeze home in a classic game.