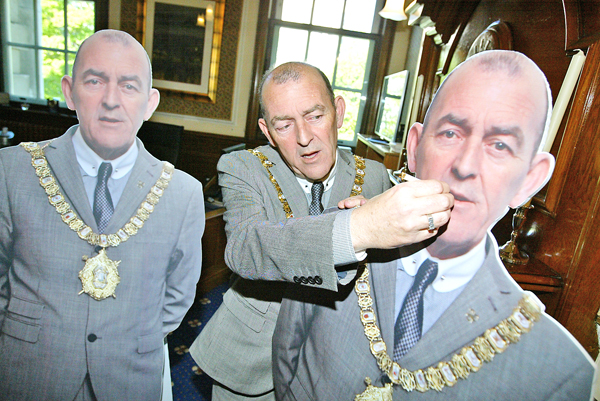 WITH the morning sun flooding the Lord Mayor’s chamber outgoing First Citizen Arder Carson is in relaxed form as he prepares to hand over the chain and civic duties to DUP Alderman Brian Kingston.

Over the first of many cups of tea on his final day yesterda (Wednesday), Arder told Daily Belfast that the past 14 months representing Belfast at home and aboard had been “an education and an absolute privilege”.

“Well the name Carson is now big in the city,” laughed Arder, “God almighty it’s been a brilliant year, it really has. I became Mayor on April 1 2015 and I think the city is in a great place at the minute, it’s a confident city and there is a great vibrancy about it.”
From being welcomed as a special guest to the many schools across the city to meeting with civic leaders in Boston, Denmark and China, Arder spoke of how he was delighted to be an ambassador for Belfast.
“Since becoming Mayor I’ve been abroad quite a bit. I’ve been in Boston three times, I’ve been to China, Denmark, Sweden, Nashville and Washington – I got in, Adams didn’t,” he chuckled.
“The visit to China was to sign off on our Sister City agreement in Shenyang. It’s a real big for the city, for Belfast. Shenyang has a city population of eight and a half million and a provincial population of 21 million and we have 350,000 in our city so to have a relationship with a city of that size I mean I don’t tweet that often but I put one out saying ‘Team Belfast sealing the deal in China. City ambition will be the limit of its success’.
“There is a real opportunity for us to engage with China on business, culture and tourism. Queen’s already have a campus out there so there are real connections in place already.”
Arder continued: “In terms of what I said about being a Mayor for all communities I am proud of what I have achieved and I have represented all the communities in this city not just the orange and the green. I feel like I have done what I said I would do. I’ve been in every part of the city and I have always been treated with respect and courtesy. I got piped down the Newtownards Road – a Shinner Mayor getting piped down the Newtownards Road! I was opening a community garden and out came the bagpipes nobody turned an eye so it was great.
“I am proud that I and we as a council have worked with the homeless voluntary and statutory organisations to work on and form a collective strategy to help those who are out on our streets.

“I am delighted with the work we have done to welcome and settle the Syrian refugees, there was real unity in the chamber after an emergency meeting was called and a vigil held.
“When they arrived in our city I went to welcome them in December. I welcomed them into the chamber in February and the difference in their demeanour was fantastic as when they arrived they were quite forlorn and displaced. But in February you could see that they had settled in a bit more which was brilliant.”
Arder was keen to stress that his role as Lord Mayor “was not a position”.
“We don’t see the role like that, we see it as an opportunity to bring change, to drive the city forward. Being the Mayor suits my personality. I like meeting, talking to people. More importantly I like hearing people, which is important too, and I like a bit of craic, I mean who doesn’t? We are a city renowned for it. I like to think that I brought something, just that wee bit different to it, to being Mayor. You can only bring your own personality at the end of the day.”
When it came to trying to pinpoint a highlight during his term Arder replied: “The civic dinner held on April 8 to mark the 1916 Easter Rising. “That evening demonstrated – I mean take out the Michael D Higgins scenario – I still can’t get my head around why he did it, however, for me, the room was full that night of civic unionism, church unionism. The Lord Lieutenant was there who is the Queen’s representative, ex-British soldiers were there. Unionism was represented in that room in all of its guises – apart from its political guise, yet he chose that reason for not coming to this city.
“Personally I think he insulted unionism and he certainly insulted us and the city. If anything that particular night demonstrated the maturity of the city and where it is at now.”

On another highlight, Arder recalled: “14,000 people turned up for my City Hall Bank Holiday May Day picnic. I honestly couldn’t believe it, the people were queued down the street. I was afraid to go out in case there were only about six people there. I think it’s been a great year for Belfast both at home and aboard. International relations has been a key focus of mine. Belfast is developing a glowing reputation on a global scale and that’s where we are, we are and will continue to push that.”
Reflecting on his partnership with Deputy Lord Mayor Guy Spence Arder described the 23-year-old as “young, enthusiastic and energetic – three things I’m not so there is a good balance there”.

“I called us at the last council meeting Belfast’s answer to Ant and Dec. I’m not sure if he appreciated it as someone shouted up from the benches ‘who’s Ant and who is Dec?’ I’m always on the right so I must be Ant,” he smiled.
With just a matter of hours left as Belfast’s civic leader Arder said the next few days will be back to business in his role of Sinn Féin Coucillor for the Blackmountain Ward area.
“After tonight I’m back on the pews, back to being a councillor and I’m going to have to get a job. That’s the reality; it’s like that Frank Sinatra song That’s Life. I’ve been out if my constituency for 14 months so it be will good to get back to work and my constituents.
“I want to spend some time with my family. I haven’t seen too much of them, as much as I normally would. I did have the conversation with them and told them that they wouldn’t be seeing me for a year but I don’t think they thought I meant it.
“It’s the nature of the mayor’s role in the city to try and cram as much in as you can, to try and make as much of an impact as you can.”
“I’ve learned so much about this city, you have to, when you travel you have to be able to talk about, you need to know all the facts and carry that information. Belfast is a brand now. There is a billion pounds worth of investment going on now in our city in terms of tourism the city is thriving.”
“If you ask any tourist the best things about our city they will answer on the warmth and welcome of people, there is no better selling point for me. It’s just a pity we can’t be that bit warmer, bit more courteous to each other when we live cheek by jowl.
“Tonight will be a case of job done, box ticked and see where ever life takes you next and I’m looking forward to that.”