SQUINTER: Arlene’s across every jot and twittle yet again 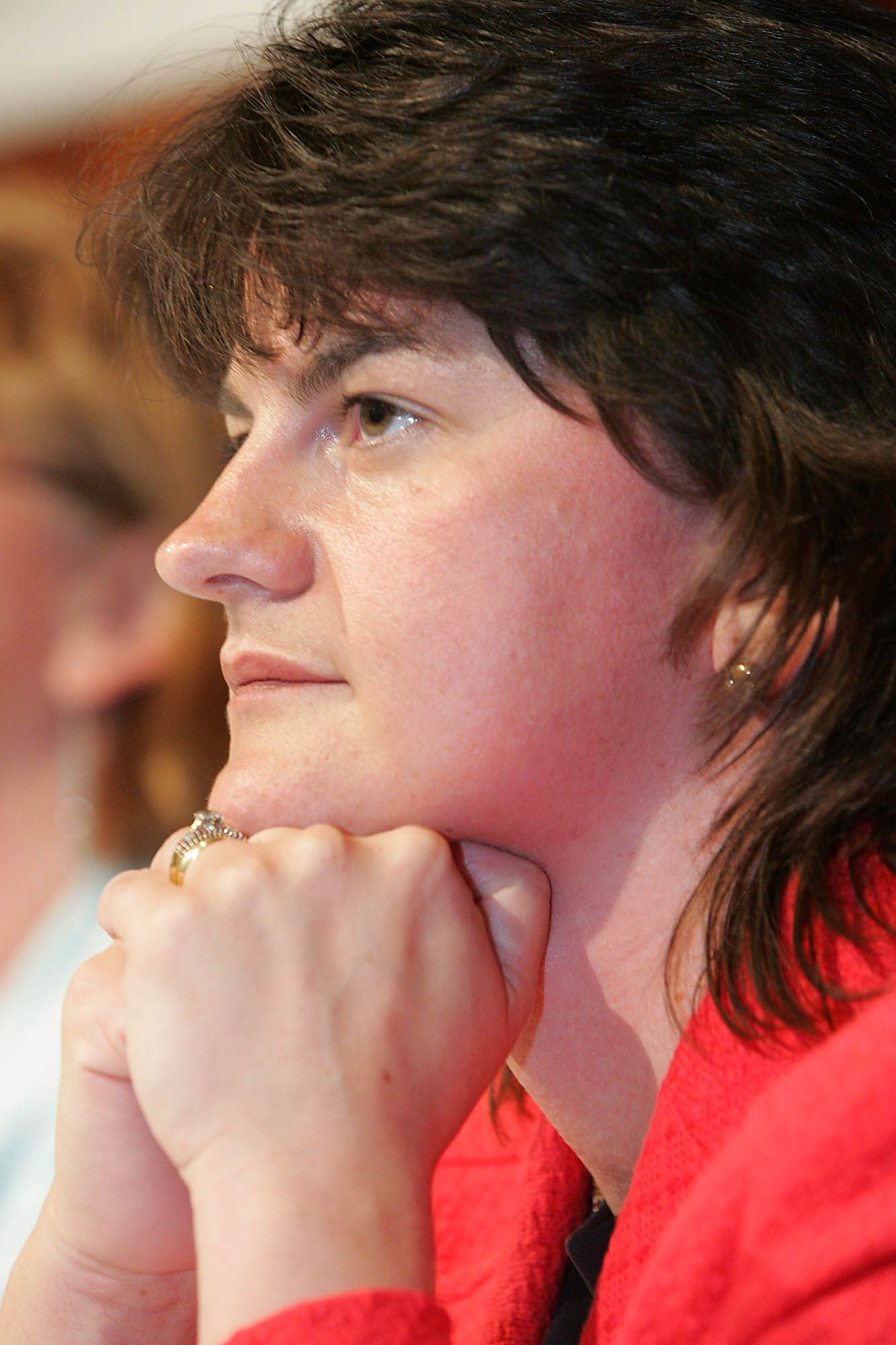 SINN Féin Laois-Offaly TD Brian Stanley was in hot water at the weekend on the 100th anniversary of the Kilmichael ambush.

The chair of the Dáil’s Public Accounts Committee tweeted: ‘kilmichael (1920) and Narrow Water (1979) the 2 IRA operations that taught the elite of d British army and the establishment the cost of occupying Ireland. Pity for everyone they were such slow learners.’

The tweet was quickly deleted and an apology issued, but Sinn Féin’s opponents north and south were quick to go on the offensive, accusing Stanley and Sinn Féin of insensitivity. In the vanguard of the backlash was DUP leader Arlene Foster, who fired off a complaint to the Ceann Comhairle of the Dáil.

Which is all fine and dandy because Squinter shares the views of the Sinn Féin party leadership that the remarks were “wrong” and “wholly inappropriate” – a sentiment that no doubt Arlene herself would go along with.

But let’s back up a few months to May when another anniversary rolled round, this one the 33rd anniversary of the Loughgall shootings which claimed the lives of eight IRA volunteers and a civilian. North Antrim DUP MLA Paul Frew was so exercised by the anniversary that he felt moved to tweet about it – although why a 33rd anniversary is so particularly worthy of comment Squinter has no idea. “Today we remember the bravery and professionalism of the SAS who on this day 33 years ago stopped 8 terrorist killers from entering Loughgall Police Station and murdering 2 officers inside.” Three more tweets followed in quick succession outlining the nature of the ambush and the damage it inflicted on the IRA.

Just as Mr Stanley’s tweet caused upset and hurt, so Mr Frew’s had the same effect five months earlier. Asked in the Assembly chamber about the tweets, Mrs Foster replied: “I am blissfully unaware because I don’t do Twitter.” Which was strange, because Arlene most certainly does do Twitter, as we all saw back in November 2017 when she tweeted: “Congratulations to HRH Prince William on his engagement to Megan Markle. Wonderful news this morning!”

Which was nice, but unfortunately it was Prince Harry who had just got engaged (and to Meghan, not Megan). In keeping with her celebrated RHI Inquiry claim to be “accountable but not responsible,” she blamed a staff member who, she said, had tweeted a “genuine typo”. Arlene quickly corrected her mistake, which was also nice, but she again got the spelling of Harry’s fiancée wrong. And Arlene remains on Twitter, although it’s likely that her tweets are a communal effort by the team around her.

The fact that Arlene “doesn’t do Twitter” hasn’t stopped her from jumping feet-first into the Kilmichael/Narrow Water controversy because, even though she mightn’t have spotted the Brian Stanley tweet herself, she’s at least had it brought to her attention. And yet, not only are we expected to believe that the Paul Frew Loughgall tweet of which she was “blissfully unaware” was not brought to her attention, but that she had displayed a total lack of curiosity about the news stories covering it in the run-up to the Assembly question.

Squinter reckons Arlene is being way too modest when she claims not to be across every jot and tittle. Clearly she can be right on top of things – when she wants to be.

James cooks up a mess in more ways than one

CELEBRITY chef James Martin hit the news this week when a blender malfunction saw his soup sprayed all over a breakfast TV kitchen. Bit of festive fun on a grey Monday morning, but Squinter’s going to be honest and say that he’s not been a big fan of the chubbily jovial cook since the bloke got in touch with his inner Jeremy Clarkson.

Martin used to moonlight as a motoring columnist in the Mail on Sunday and he used his column to articulate his extreme dislike of cyclists. Test-driving a Tesla electric car, he wrote about how he speedily and quietly came up behind a group of cyclists on a country lane and then loudly sounded his horn to drive them off the road. “The look of sheer terror as they tottered into the hedge was the best thing I’ve ever seen in my rear-view mirror.”

So Squinter must admit that he found it hard to sympathise with James’s kitchen malfunction and when he said as much on Twitter there was the usual petrol-flavoured gammon responses to the effect that cyclists should be locked up, executed, deported, or at the very least made to pay road tax like the rest of us.

Sadly it falls to Squinter to point out that motorists here don’t pay road tax and haven’t done since the 1930s, when the levy was scrubbed – by Winston Churchill, no less. What they pay is Vehicle Excise Duty (VED), which is in effect a punishment for polluting the environment. As many reading this will know, if you’ve got a wee car that emits very little pollution, you’ll pay no VED, or else very little (Squinter pays £30 a year). If you’re driving to the Kennedy Centre in a four-wheel-drive vehicle with an engine capable of towing the Titanic, one that was designed to be driven up mountains, then you’re going to get it in the neck, financially speaking.

So, no, drivers don’t pay money to use the roads, as bike-haters are fond of claiming, they’re paying money because they’re pumping out toxic fumes.

That said, while Squinter will always go in to bat for cyclists on proper roads, he’s fully signed up to the lobby that argues for them to be banned from popular walking spots. Because while no motorist can be hurt in a collision with a cyclist (although a few nasty paint scrapes are likely) a cyclist can do a hell of a lot of damage coming up behind a walker at 20mph, on the Lagan towpath, for instance. Especially when the 50-year-old Bradley Wiggins has spent £1,500 on his bike, £400 quid on his skin-hugging dayglo top and shorts, £150 on cleated shoes and £200 on a go-faster helmet – but refused to spend a fiver on a bell.

Out and about during lockdown

So Squinter’s devised a couple of wee word games to help you pass the time as we wait to see what awaits us when this latest circuit-breaker is at an end.

See how you get on with these and if the craic is mighty enough there might be another one or two next week to mark the end of the latest lockdown; or indeed the beginning of the next one.

Don’t bother cheating with Professor Google – they’re all our own work and not up on the internet. Well, not yet, at any rate.