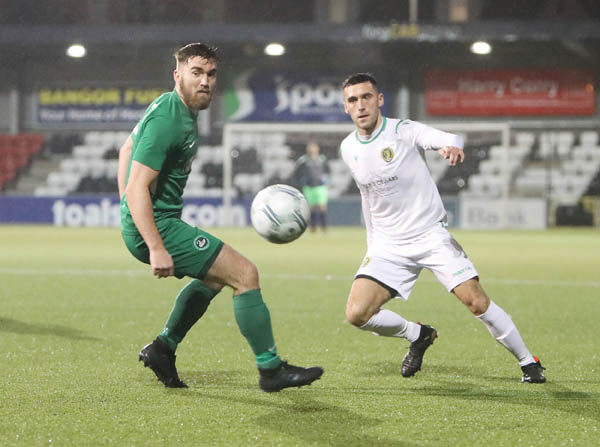 BELFAST Celtic chairman Jim Gillen has called on the Irish Football Association to consider their next move very carefully amid fears that Intermediate and Amateur football team might have their seasons expunged.

Gillen’s remarks comes off the back of last week’s controversial decision by the English FA to immediately end all 91 leagues below the National League with this season’s results expunged with no promotion or relegation. The same applies to the women’s Super League and Championship in England.

However, more than 100 non-league clubs have sent an open letter to the FA calling for it to “urgently” reconsider the decision.

The current state of affairs in local football leads Gillen to assume similar drastic action could be taken in the wake of the global Covid-19 pandemic.

“They (the IFA) hadn’t set a date for the Intermediate Cup semi-finals and they hadn’t set venues for them yet either,” stated Gillen.

“They did the draw for the semi-finals, but they didn’t release any more information. We were in the dark, but I’d imagine those games would have been reasonably soon as the final is generally the end of April. They’ve told as absolutely nothing.

“We received an email last week from the Ballymena League with the grid for the outstanding fixtures and whatever cup draws there were, but we’ve had no information at all if and when they will resume. They’ve set up a steering group to help clubs through this crisis, but we are bottom of the pile.

“It was interesting that the English FA have scrubbed all leagues below the National League. They are null and void.

“It wouldn’t surprise us at all if all the Intermediate leagues are scrapped. I’ve read a few articles and people are speculating that Intermediate football will be declared null and void. If that does happen, what does NIFL do? The Premier Intermediate League became a bit of a joke last year after they went with 11 teams and we were relegated. Then Lurgan Celtic pulled out. If nobody can take that spot through winning the league or a play-off, do they go with 11 teams again?”

With local football on hold until at least the end of April 30, it seems unlikely that all fixtures will be played without a major extension to the season which, in turn, could have a knock-on effect on next season.

Gillen believes the IFA will focus on safeguarding the remaining fixtures for the top tier teams at the possible expense of the lower leagues.

“Our fear all along is that they will do everything they can to protect the Irish Premiership and the Irish Cup,” added Gillen.

“Beyond that, do they really care?

“The unfortunate thing is, people in the Ballymena League, the Mid-Ulster League and the Amateur Leagues take direction from the IFA and will go by what they say. There won’t be any insistence that we finish our league and it will take away from the credibility of everybody.”

While the future of the local football leagues remain unclear, Gillen is hopeful that the Intermediate Cup will be concluded.

Three Belfast clubs remain in contention at the semi-final stage with Belfast Celtic set to take on Newington in a repeat of the Steel and Sons Cup semi-final clash between the sides in November which the North Belfast side won after a penalty shoot-out. St James’ Swifts face Premier Intermediate side Dollingstown in the other semi-final.

After watching his side come from 4-2 down to defeat Moyola in the last round, the Belfast Celtic chairman hopes the competition will be completed.

“We’ve a bit of unfinished business there with Newington,” said Gillen.

“We’ll have to go and right a wrong because, I think, in the Steel and Sons Cup semi-final we were the better team. We didn’t finish the job, but we will this time - provided the game goes ahead.

“Against Moyola, it was a crazy game. Coming into the game, we hadn’t played in three weeks and we just had a 20-minute meltdown at the back.

“Once we got over that, we were 4-2 down and the boys got themselves together. Even at 4-2 down we felt we could win it.

“They never stopped and they were superb that day and it shows the fight they have. I hope they get the chance to play the semi-final. Admittedly, there are four good teams left and any one of the four could win it.”

It isn’t just the Intermediate Cup which is at stake for Belfast Celtic. The West Belfast side remain in the hunt for the Ballymena and Provincial League title along with their neighbours St James’ Swifts.

Dunloy may have stolen a march on the city sides, but the current league-leaders are far from guaranteed the title but, should the season be declared null and void, Gillen says the Glen Road Heights side will be ready to pick off where they’ve left off.

“Dunloy are miles ahead, but we are the only other team who can catch them off our own accord,” said the Belfast Celtic chief.

“If we win all our remaining games, we win the league. If St James’ win their games in hand and that would mean beating Dunloy, they would still need Dunloy to drop further points.

"We can overtake the teams ahead of us if we win all our games. We’ve 10 games in hand plus the remaining fixtures so there is all to play for. We had a tremendous season in our first year.

“In the greater scheme of things, all that matters is people’s health and well-being, but from a footballing perspective, it is frustrating.
“One thing I will say is that ‘Mackers’ (Stephen McAlorum) and Paddy (Kelly) have assembled a great bunch of lads.

“Whether this season is null and void or we get playing again, we’ll be ready to go again and, when we do, we’ll finish off the business we started.”