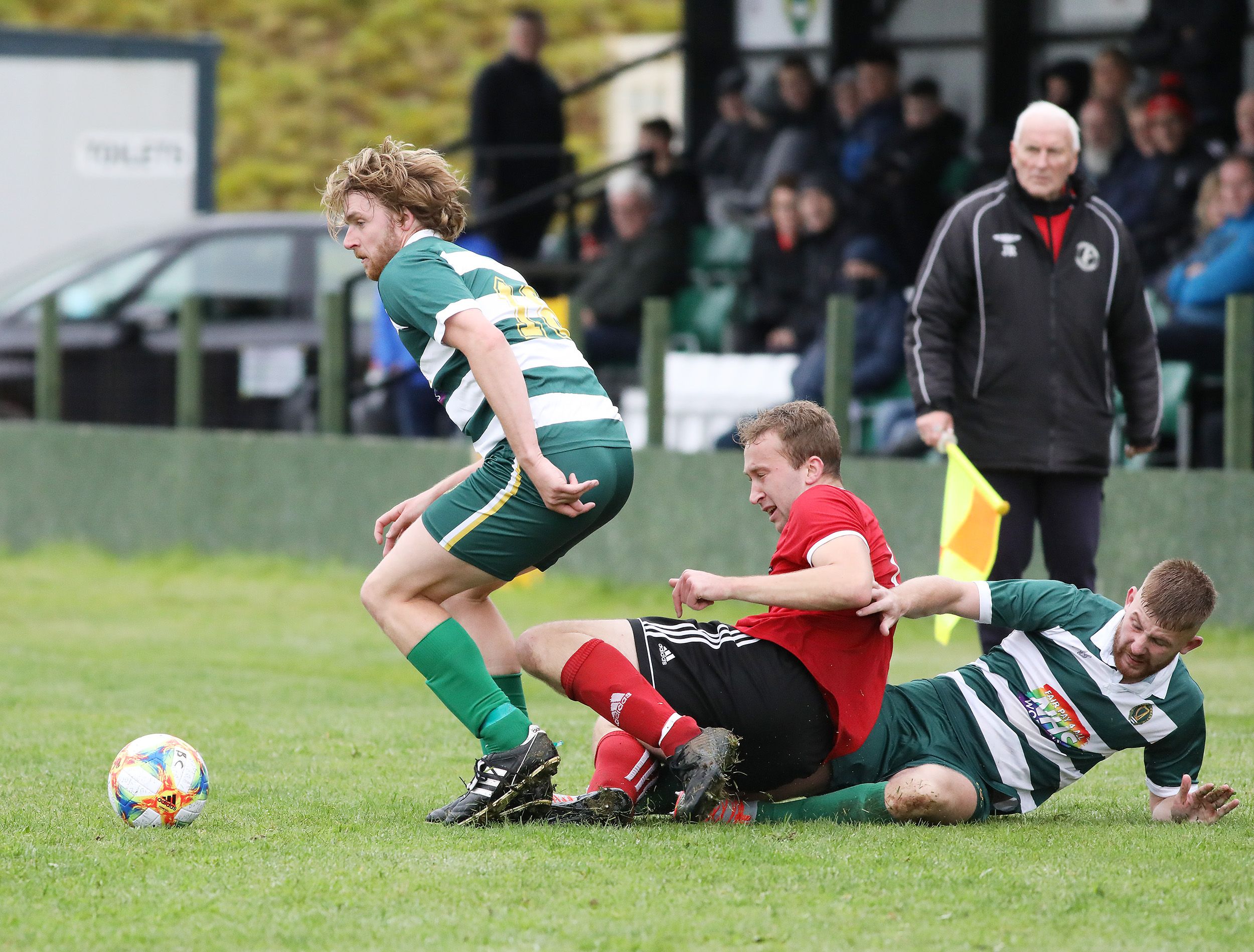 Stephen Beatty gets on the ball during Saturday's game Jim Corr

BELFAST Celtic’s season got off to an indifferent start on Saturday when they blew a three-goal lead at home as Chimney Corner fought back to claim a deserved share of the spoils in an eight-goal thriller.

The hosts would have been strong favourites to make a winning start to their campaign after challenging for the title last season.

The West Belfast side finished third behind champions Dunloy, who were awarded the title, and local rivals St James’ Swifts following a shortened season due to the Covid-19 pandemic.

Having been denied the opportunity to catch the North Antrim side last season, Belfast Celtic would have been keen to lay down a marker in their first outing and the early stage of Saturday’s season opener certainly went to script.

Stephen McAlorum’s men were 3-0 ahead after half an hour and probably should have been further ahead but for some fine stops by Chimney Corner goalkeeper Ross McKnight.

The hosts held 4-2 after a breathless first half, but the Antrim town outfit fought back in the second half and headed up the M2 with a well-earned point.

The omens weren’t good early on for the visitors as they conceded a penalty within the first four minutes.

Emmett Templeton was brought down in the box and Joshua Lynch stepped up to confidently dispatch the penalty past McKnight to put the hosts 1-0 up.

They ought to have added to their tally moments later when a long ball over the top from new signing Chris Ramsey put winger Padraig McParland through on goal, yet McKnight was quickly off his line to smother the shot.

Kevin Lynch was then off target with a header as Belfast Celtic piled on the pressure in the opening 10 minutes.

They bagged their second when Daniel Hanna and Shane McKernan linked up to set up Darren Stuart for a shot from the edge of the box and the striker’s clipped the right-hand post and into the net.

McKnight was called into action once more on 15 minutes when McParland played McKernan through on goal, but his shot lacked conviction and was comfortably saved by the Chimney Corner shot-stopper.

McParland and Kevin Lynch combined to put McKernan in on goal again with McKnight pulling off another save with McKernan’s rebounded then being cleared off the line by Chimney Corner skipper Jack Chalmers.

Strikers McKernan and Stuart combined for another glorious chance for the hosts with the former free at the back post.

Somehow, McKnight scrambled across the face of goal to block Stuart’s shot when he looked certain to make it 3-0.

On the half-hour mark, Belfast Celtic did manage to land their third when Joshua Lynch’s free-kick was played into the box and Chimney Corner failed to clear the danger.

Kevin Lynch popped in at the back post to bundle the ball home with the goal being allowed to stand despite protests of handball from the visitors.

Having barely had a save to make in the first 30 minutes, Belfast Celtic goalkeeper Padraig Nugent had to pick the ball out of his net following Adam Walker’s fine finish from an excellent Kyle Robinson cross.

Five minutes later, Chimney Corner were right back in the contest when the lively Jonathan Coulter played a delightful ball into to Ryan Worthington and the striker finished well to make it 3-2 with 37 minutes gone.

Nugent was then forced to make a great save to deny Robinson as the Antrim side pressed for an equaliser.

Belfast Celtic took a two-goal advantage into the break, however, when they landed their fourth late in the half.

A clever step-over dummy from Kevin Lynch released Stuart in behind the Chimney Corner defence and the striker finished with aplomb to make it 4-2 at half-time to the hosts.

The opening stages of the second half was quite scrappy as the rain continued to fall, but Belfast Celtic continued to have the better of the chances.

They had a brilliant chance to restore their three-goal cushion, but they were thwarted by McKnight who got down low at his near post to deny Joshua Lynch 10 minutes into the second half.

At the other end, Worthington was very fortunate not to go into the referee’s notebook after clattering into Nugent.

On the hour mark, Walker made it 4-3 when he poked home from close range after Nugent made a great save from his initial shot on goal.

Nugent was now the busier of the two goalkeepers and he had to be at his best to prevent Walker once more when the striker played a one-two with Tom Patchett before firing towards goal.

Defender Ciaran Donnelly was then called upon to maintain Belfast Celtic’s lead as he cleared a Jack Chalmers header off the line.

The introduction of midfielder Stephen Beatty appeared to steady Belfast Celtic somewhat before a late onslaught from Chimney Corner brought about the equaliser.

A mix-up in the Belfast Celtic defence meant that Walker nipped in behind Mark Clarke as he attempted to head the ball back to Nugent and Walker’s gamble paid off as he slotted home to make it 4-4 with three minutes of normal time remaining.

Belfast Celtic almost hit back straight away as McParland forced McKnight into yet another save from close range.

The final chance of a remarkable game fell to the visitors in stoppage time as William Higgins almost found Walker at the back post, but the delivery had too much pace and the chance was squandered as both teams had to settle for a point.