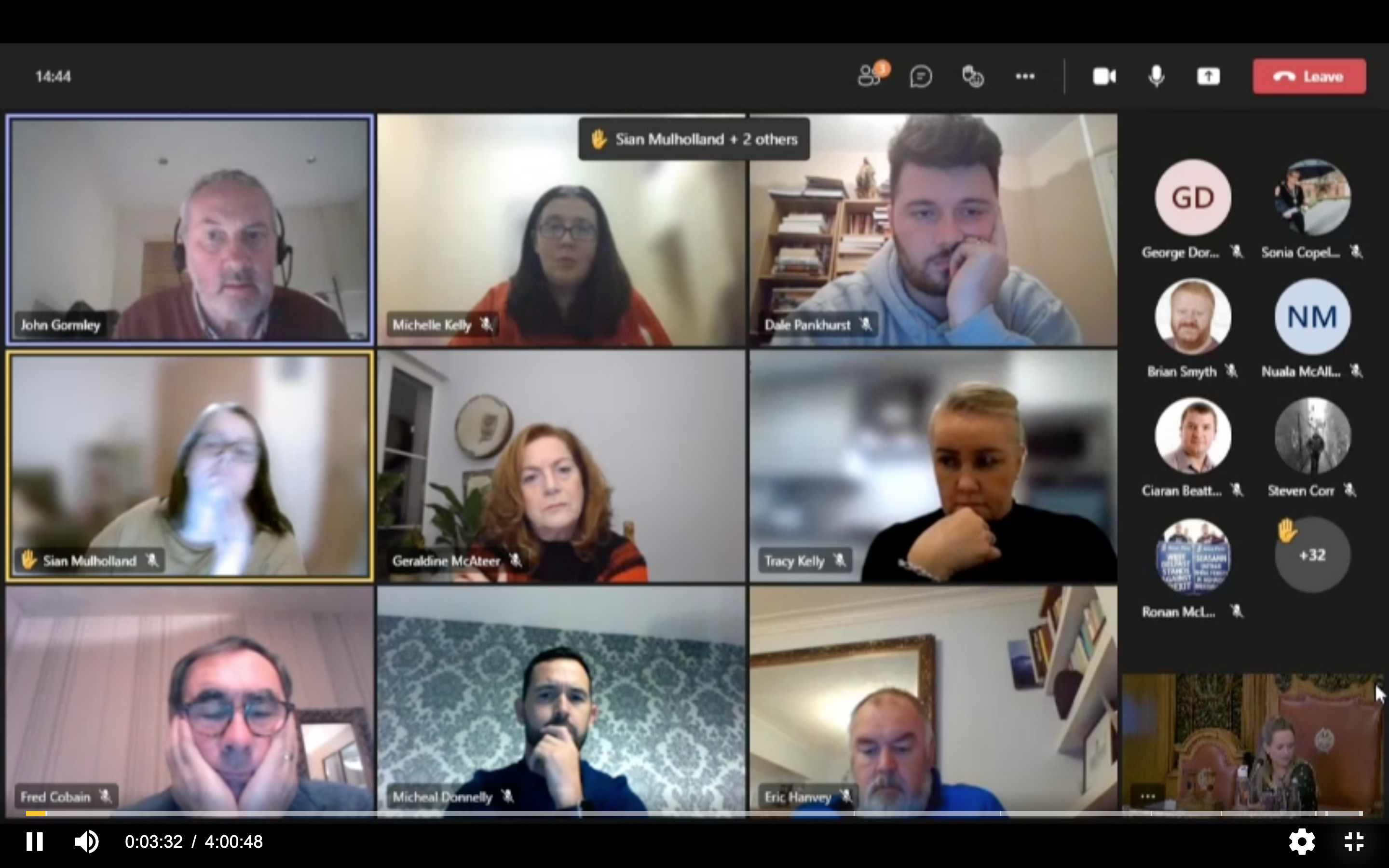 COUNCIL MEETING: The majority of councillors are still meetings remotely

NOVEMBER’S meeting of Belfast City Council began on a light note with congratulations to Cllr Dale Pankhurst on his recent marriage, praise for the progress of East Belfast GAA club and the opening of COP26 in Glasgow.

On to the Committee meetings and as ever it was the Strategic Policy and Resources Committee minutes which caused a headache for some in the chamber – and virtually at home on Monday evening.

Regarding proposals for bye-laws against buskers and protesters in the city, People Before Profit Cllr Fiona Ferguson said Council had no business placing fees/barriers/fines before protest and playing in our city.

Very pleased that my proposal to halt new bye-laws which targetted buskers and protesters in our city has been agreed.

Council has no business placing fees/barriers/fines before protest & playing in our city.

They will now be brought back, reviewed, and equality screened.

After some debate, councillors argued there should be bye-laws to stop people shouting tirades of abuse from megaphones. After a vote, the bye-laws will now be brought back, reviewed, and equality screened.

PUP councillor John Kyle then raised the issue of what he described as “illegal” and “anti-social” parking in the Cregagh estate when there is an Ulster Rugby match on at the Kingspan stadium. He said that almost every home game, residents of the Cregagh estate are subject to an influx of huge vehicles that park in ridiculous situations.

Good display of Lisnasharragh unity tonight in Council plenary about dealing with issues around Ulster Rugby parking in Cregagh and Ravenhill. Bizarre intervention from some who haven't shown up to meetings about the issue for some time, but hey ho - we'll keep working.

Council has agreed occasional use of car park adjacent to Cregagh Youth and Community Centre but he said it was not enough with many spectators parking their cars across footpaths, driveways and corners of the Cregagh estate and not in middle-class areas in South Belfast

Alliance Cllr Michael Long said It was an ongoing issue for last 15 years or so, saying people don’t care whether they are fined or not and that more park-and-ride facilities are needed. DUP Ald Tommy Sandford, who lives in Cregagh estate said people were parking ‘willy nilly’ and was glad to see the issue raised and called for an urgent solution.

Ald Jim Rodgers proposed a meeting with Ulster Rugby senior officials and management about the issue.

Council then agreed the eagerly-anticipated heritage trail signs, which will soon be erected at the front of City Hall, and welcomed the number of expressions of interests from groups across the city to use.

DUP Ald Brian Kingston then objected to Council contributing £15,000 towards a feasibility study into developing a Universal Basic Income (UBI) pilot in the North. He said it would not be a wise way of spending money and would undermine the benefit system currently in place. In response, Green Party Cllr Áine Groogan said the benefit system was “inhumane” and it was right to do research into UBI

PBP Cllr Matt Collins said the DUP was in no position to talk about benefits given their support of the Tory government and in particular the recent £20 uplift of Universal Credit.

The proposal by Ald Kingston to not carry out the study was lost.

Next up was a debate over a new Committee introduced at Belfast City Council – the Standards and Business Committee which deals with a number of motions. Cllr Nuala McAllister described the new Committee as a complete waste of time. It will not stop people bringing motions up at full Council meetings.

As Ald Kingston was debating, he mispronounced the name of SDLP councillor Séamus De Faoite, much to the anger of fellow councillors. Ald Kingston said he would “practice” how to pronounce it properly before Lord Mayor Kate Nicholl reminded councillors to treat and respect each other fairly.

Next up was UUP Ald Jim Rodgers who called on councillors to visit Roselawn Cemetery to see the great work staff are doing and called for less criticism of it. Alliance Cllr Sian Mulholland said there was an Issue of weeding and she hoped extra resources would be brought in to ensure loved ones are satisfied with the state of the Councill-run cemetery.

After this there was the raising of another issue already agreed at Committee and the Council’s position on Phase 2 of the Belfast Rapid Transit, with Council issuing a statement regarding both Shore Road and Antrim Road options. Ald Kingston said the DUP stands by position of favouring a Shore Road route for North Belfast and called for Council support for this route.

He added that he doesn’t support 12-hour bus lanes along all considered routes, describing it as the “pain with no gain”.

Cllr Conor Maskey said everything was agreed in Committee and Cllr Mal O’Hara accused the DUP of bringing issues forward to full Council meetings when they know it would be voted down, as they had already been agreed at Committee.

Cllr Mal O’Hara expressed his frustration at issues being brought up repeatedly, insisting that motions were not at fault for long full Council monthly meetings.

Not content with being rude to Councillors from pretty much every other party in plenary tonight, the DUP are forcing us to re-vote on every vote they lost in this month's committee meetings. This after they've been telling us for yonks we spend too much time on motions...

On to the motions, and there was unanimous support for recognition of the community sector by Cllr Sarah Bunting and efforts to address rent controls by Cllr Mal O’Hara. Council also supported a COP 26 Global Day of Action on Saturday (November 6) brought by PBP Cllr Fiona Ferguson. Belfast City Hall will also be lit to raise awareness of climate change.

Finally, SDLP Cllr Gary McKeown brought a motion calling for a regulation of AirBnBs in the city.

Good that my motion calling for regulation and licensing of AirBnBs and similar short-term lets was passed tonight by Council.

We know there's a problem, we know people are being impacted, so we can't justify delaying any further in getting on top of this issue. pic.twitter.com/pmkocrhXXn

He said there was anti-social behaviour occurring at many such properties and called for an urgent cross-departmental review of the issue and the creation of a robust and effective regulatory and licensing system for properties intended for use as short-term lets of this type.

In response, Alliance Cllr Michael Long spoke of his own personal positive experiences of AirBnB properties and called for more evidence from Cllr McKeown of anti-social behaviour. He added that the number of AirBnB properties in Belfast was small in number and offered a cheaper alternative to hotels for tourists.

DUP Cllr Tracy Kelly and Sinn Féin Cllr Geraldine McAteer also expressed their support for the motion. In summary, Cllr McKeown said no homework needed to be done, that he has been working on the issue for months and listening to concerns and complaints from constituents. The motion was passed successfully as a four-hour Council meeting came to a close. 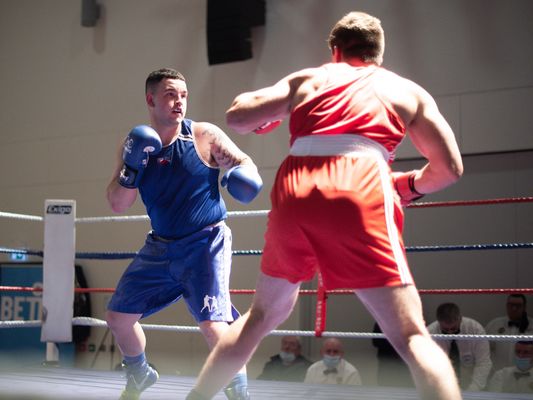 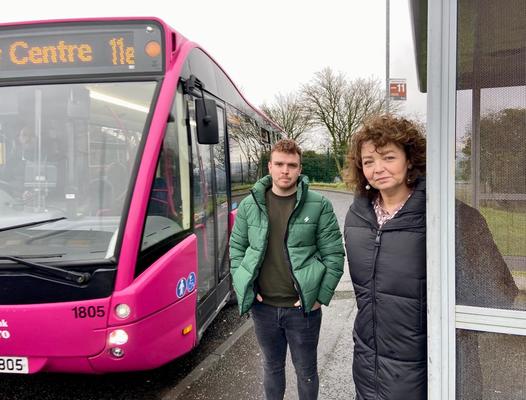 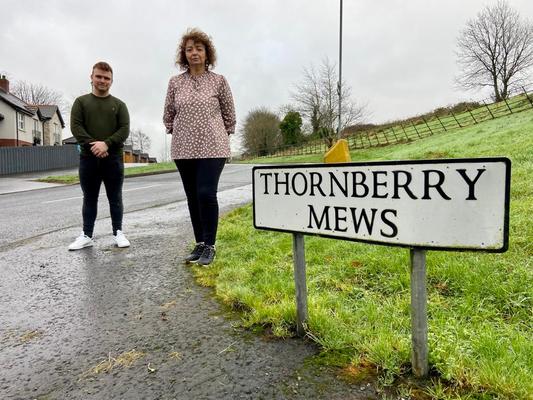