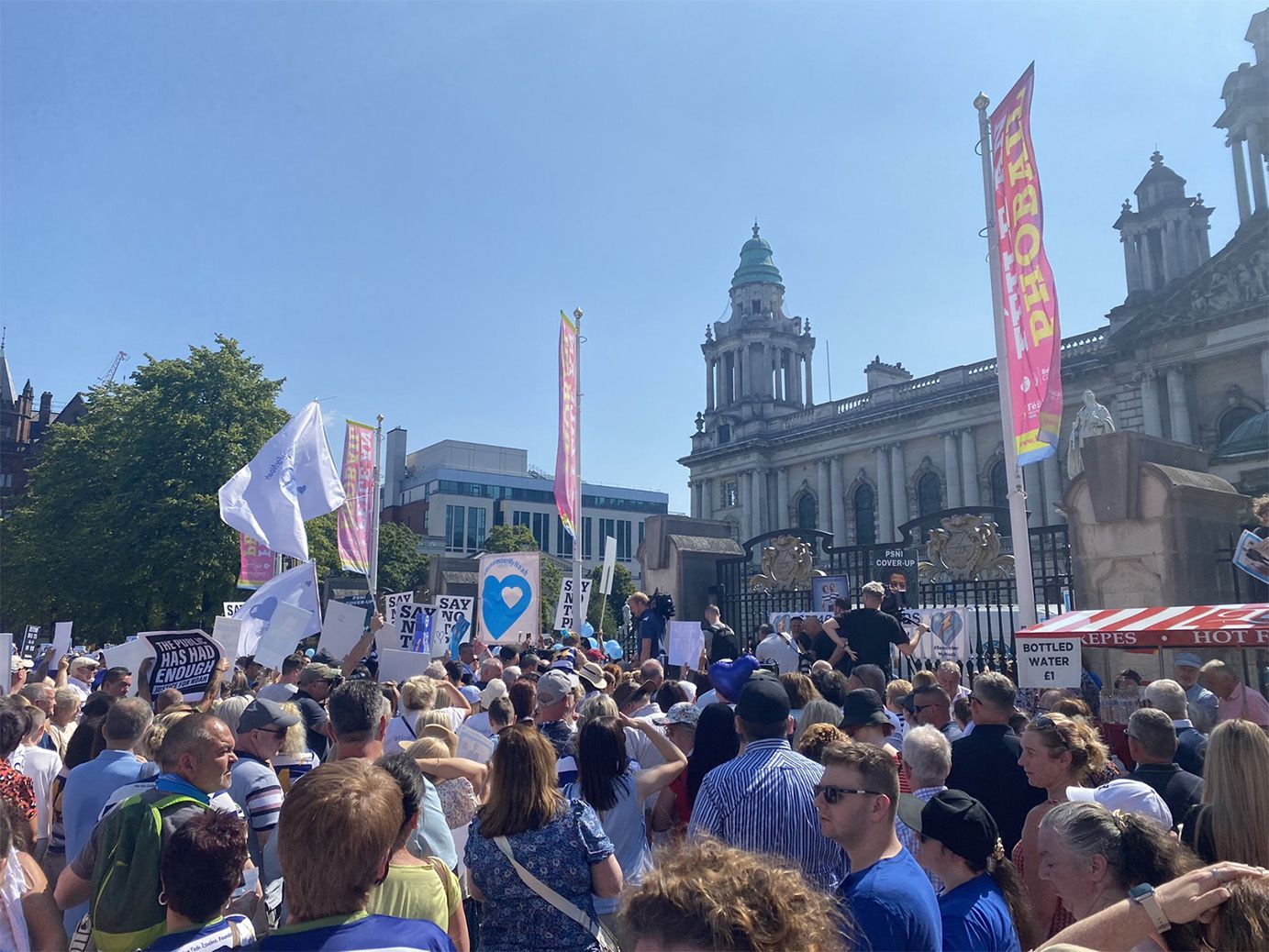 PROTEST: Part of the large crowd at Saturday’s Noah demo

ON Saturday several thousand people turned out at Belfast City Hall in a demonstration of solidarity and support for the family of Noah Donohoe. The 14-year-old was found in a storm drain in North Belfast in June 2020 after being missing for six days.

The PSNI handling of the case has brought widespread criticism. In particular, its request for information to be withheld under a Public Interest Immunity (PII) application has caused outrage. At the weekend the NIO attempted to distance Shailesh Vara MP, the recently appointed British Secretary of State, from the application. It claimed that the PII was made by the PSNI but it was Vara’s signing of the order which pushed the responsibility for deciding what can and cannot be made public over to the Coroner’s Office.

North Belfast MP John Finucane, whose family have been fighting a long campaign for the truth about the murder of their father, human rights lawyer Pat Finucane, addressed Saturday’s protest. Expressing his solidarity with Noah’s mother Fiona and her family, John told the family that they do not stand alone. “When she fights for the answers she deserves through our legal system, she knows, everyone knows, that there are so many who stand with her and support her.”

While he had never met Noah, John said that since his death “it’s hard not to feel that we have all got to know something about this incredibly special boy who lived in Belfast, who went to St Malachy’s College in North Belfast. A good student, a good friend, a basketball fan and someone who had their life ahead of them.”

The inquest into Noah’s death takes place on November 28. The family’s legal team is currently preparing for the inquest as it has the potential to examine all of the issues, all of the questions that need to be answered, in a fair and transparent manner. And there are many questions around Noah’s disappearance. The manner in which the search was conducted. And the introduction of the Public Interest Immunity certificate.

The key to getting to the truth is openness and transparency. No hiding of any of the facts. The family seek justice. That is their right. And that is why so many support them.

LAST Friday, there was standing room only on Prisoners’ Day in the Felons as Richard McAuley and I were joined by former Armagh POWs Síle Darragh, Máire Cush and Martina Anderson for the launch of a new book on the Armagh women.

‘The Armagh Women – The Story of Protests in Armagh Women’s prison’ is a tribute as well as a history of republican women resisting oppression.

The book begins with the construction of the prison in the 18th century. It outlines the imprisonment of republican women there in the 20s, 30s, 40s and 50s. Regrettably, there is not a huge amount of information covering that period.

Armagh Women primarily focuses on the period from 1970 to 1986, when the republican women political prisoners were moved to Maghaberry Prison. During those years hundreds of women, some as young as 16, and others in their 60s, were held in appalling, unhealthy and frequently brutal conditions. They were from all parts of the north.

The book contains first-hand accounts of conditions and the women’s experience throughout the period. Through their own words we get a sense, a glimmer, of the extreme hardships they endured and of the daily battles, including hunger strikes, that took place within the dark, forbidding walls of this 200-year-old prison.  The British Government and prison regime sought to break the spirit of the Armagh women. They embarked on a deliberate strategy aimed at dehumanising the women, denying them basic personal hygiene products, forcing them to live in squalor and isolation, cut off from family, friends and the world outside. But despite this escalating campaign of punishments, intimidation and brutality the women refused to be broken.

Their camaraderie and solidarity to each other and to their comrades outside of the prison were strengthened. Their resolve, their spirit and their commitment to their republican principles and objectives remained steadfast.

The book is also a testament to the courage and determination of those taobh amuigh who campaigned initially during those years for political status, against internment, then against criminalisation and subsequently in opposition to strip searching. The families formed the backbone of these campaigns, especially those who campaigned as the Relatives Action Committees. We are all indebted to them for their hard work, their courage – often in the face of threats and violence from the state – and their love.

Next Sunday, August 21, the National Hunger Strike March takes place in Belfast. It reminds us that Britain’s penal policy, which was an extension of its counter-insurgency strategy, failed, but at great cost in human life and suffering. It was defeated by the courage and selflessness of the republican women in Armagh and Maghaberry and the men and women in other prisons. It took a heavy toll on the women and their families who endured it with them, on the men in the H-Blocks and those who died on hunger strike and their families.

FÉILE an Phobail was a triumph. I want to thank and congratulate the organising committee and the hundreds of activists who made it all possible by their hard work. Féile just doesn’t happen. It takes a huge amount of planning throughout the year. The result was 10 days during which a hundred thousand people attended scores of debates, discussions, 28 art exhibitions, music and sporting events, book launches and much more. Over 350 events with 90 per cent free.

The genius of the Féile is that it allows the people of west Belfast to define our identity, and share our experiences. With ourselves but also with visitors. Everyone is welcome. Féile is a celebration of all that is positive and exciting in West Belfast. It was established in 1988 as a positive answer in part to the accusation that the people of this part of Belfast were ‘savages’ and as a response to British state censorship, collusion, exclusion and the demonisation of our citizens. It has grown to be the largest community festival on this island.

Its summer school, which included over 80 debates and discussions, make it the largest of its kind on these islands. I attended as many of these as I possibly could and participated in some as a panellist. They were informative, enlightening, and attracted packed audiences, all of whom were happy to join in the conversations on climate action, united Ireland, the referendum on Irish unity, women in the republican struggle, the war in Ukraine, language rights, the role of trade unions, the plight of the Palestinian people and much more.

GERRY Adams’ piece on a young  barman’s experiences in North Belfast compels me to add my pennyworth.

On a fine May day in 1931 I was born two floors up, over the Ark Bar. If I had looked down the street on that very first morn, I’d have been looking down Townsend Street. Henry Joy’s wee city did indeed end there.

Between the bar and the living rooms, on the second floor, the Buffs, members of the Royal and Ancient Order of the Buffalos met. They played darts, bagatelle, dominoes and draughts. Their interest in politics seemed to wane before July was halfway through!
The ‘wee room’ was plain enough, as near as the Ark had to a private snug. Between it and the bar was a row of ‘boxes’, each with a little table. These were frequented by ladies wearing black shawls, well away from the bar itself with its sawdust-sprinkled floor. Their tipple was red Biddy and tawny British wine, each costing 4d.

My memory of the porter barrels differs from Gerry’s. The wine came in firkins, but the porter in much larger kills.

The Ark was closed during the 1935 Troubles and its more valuable fittings taken to our house in Cedar Avenue. I learned to count, using the cash register. The ‘No Sale’ button puzzled me but it was the beginning of an education the Ark financed for me to go through St Malachy’s, Queen’s and Maynooth. 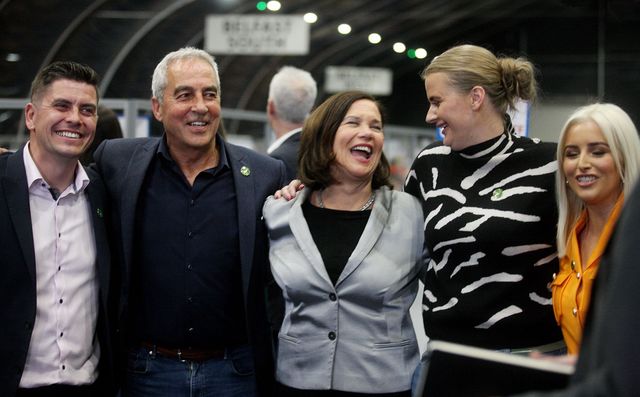 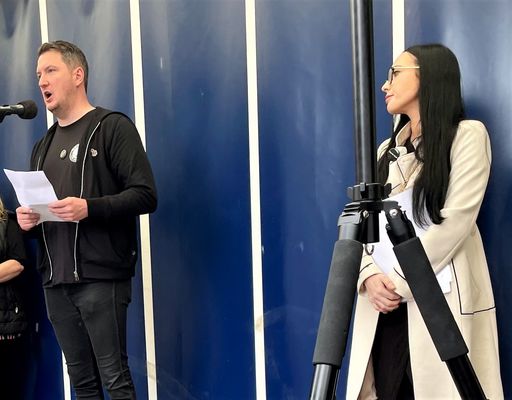 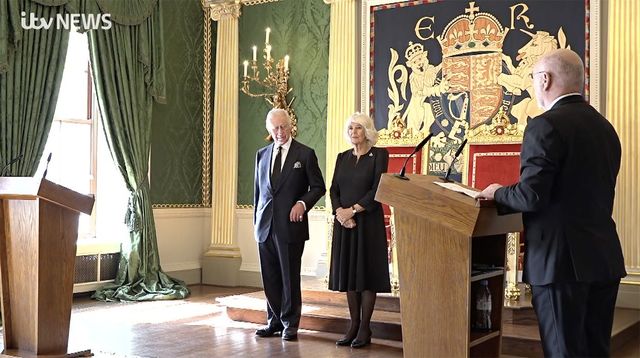