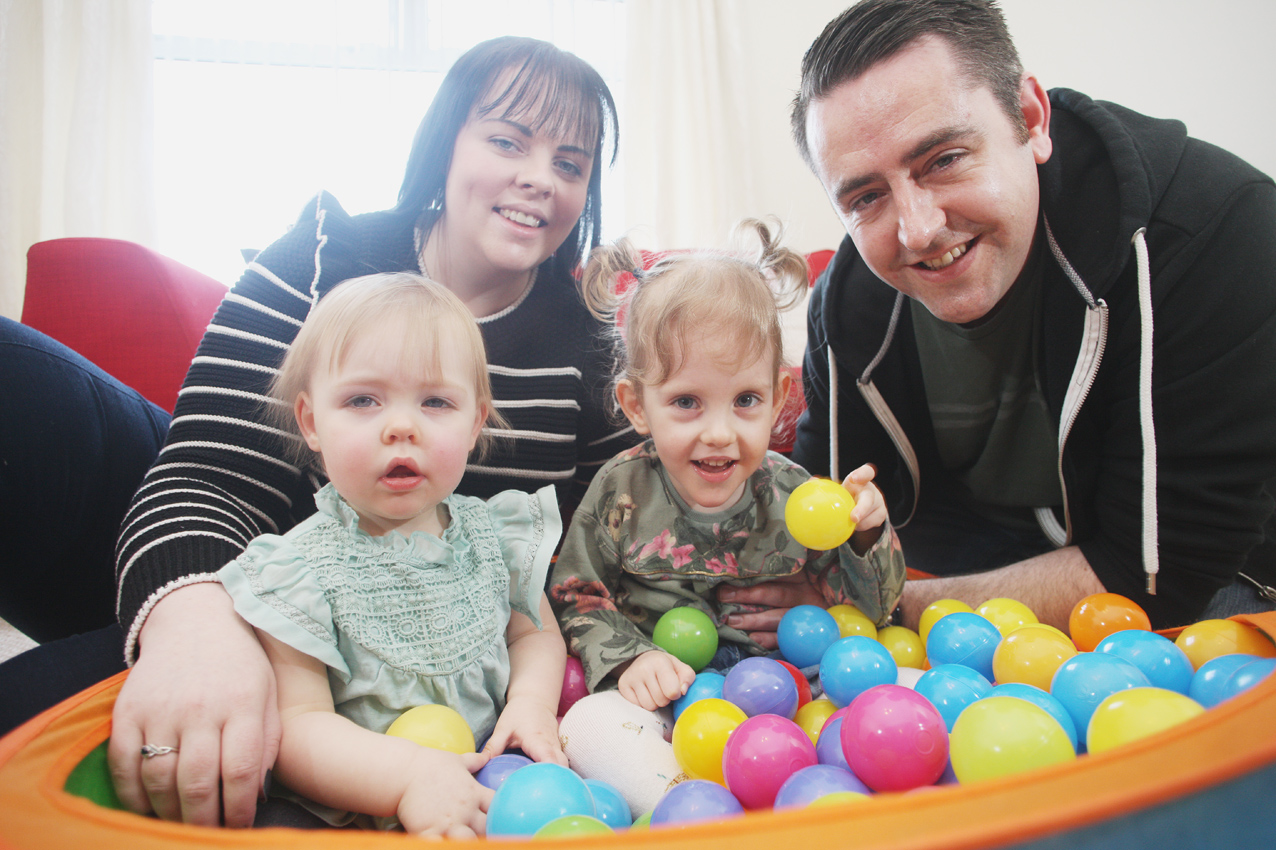 A big smile for the camera from Aoibheann O’Connor (3), who’s with mum Aisling, dad Ethan and sister Aine (1) at their Glengormley home

OVER £14,000 has been raised to continue vital treatment for a Glengormley toddler with cerebral palsy.

Aoibheann O’Connor (3) was born at 28 weeks and suffers from hydrocephalus and cerebral palsy due to a brain haemorrhage shortly after birth.

Over £14,000 has been raised so far for the three year-old to continue specialised ABR (Advanced Bio-Mechanical Rehabilitation) to ease the physical constraints of her condition. The therapy focuses on a form of deep tissue massage to improve the functional ability of the muscles and skeleton.

Speaking to the North Belfast News, mum Aisling said she has already noticed an improvement in her daughter’s condition since she began treatment in October. “

Aoibheann suffers from cerebral palsy which makes all her limbs tight, but her body is weak, “ she explained.

“Through some research and talking to people, I found out about ABR therapy which helps build up tissue in the body.

“We’ve been doing it since October and already we have seen a difference in her. She can balance a bit more herself and you can feel the strength coming into her body

“It’s a really slow progress. It’s about realigning your whole body again – we can see some subtle changes already.”

The intense treatment takes approximately two and a half hours a day and required specialised training for mum and dad, Aisling and Ethan, who are also kept busy with Aoibheann’s little sister Áine (1).

“The treatment is a leap of faith,” said Aisling. “We are raising money for something which is relatively unheard of in the medical world but we want to try anything to improve Aoibheann’s quality of life. It’s from a selfish point of view too in that the more we put in now to her treatment, the more independence she may have in the future.

“It’s been really hard for me and Ethan as parents. It’s been intense. From Áine was born, I always need someone to help me out. You can’t go to Funky Monkeys and play like normal families but you want to try and do anything you can to give Aoibheann as good a quality of life as possible. Despite her difficulties, Aoibheann is an upbeat girl who enjoys reading books, drawing and going out on her pacer. This gives us a glimpse of how life could be for her if we could improve her physical capabilities.”

Aisling set up the ‘Aoibheann’s Fight for Freedom’ fundraising page with help from Just4Children charity. Since July, over £14,000 has been raised of a £22,500 target to give Aoibheann a full three-year course of ABR treatment, much to the appreciation of her parents.

“People have been really kind in donating money and prizes for events such as putting on a tombola. It’s been amazing how people help you out who don’t even know you.”