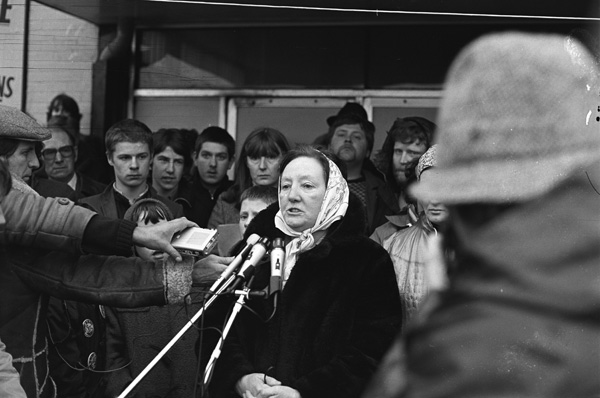 Mrs Rosaleen Sands, the mother of Bobby Sands who passed away today, January 12, 2018

Speaking earlier today as news broke of Mrs Sands passing Mr Adams said: “I was extremely saddened to learn of Rosaleen’s death and, on behalf of Sinn Féin, I extend condolences to the entire Sands clan.

“Roasaleen was a strong, inspirational woman who, like all families of the hunger strikers, bore immense pain but stood by her son Bobby during the darkest of times.

“The dignity and strength she displayed was a testament to her character and her belief in standing up for what was right and just, even if that meant great suffering for herself, Bobby’s father John and their family.

“In many ways she epitomised what all the mothers of the hunger strikers endured and her sacrifice will never be forgotten.
“Ar dheis Dé go raibh a anam.”