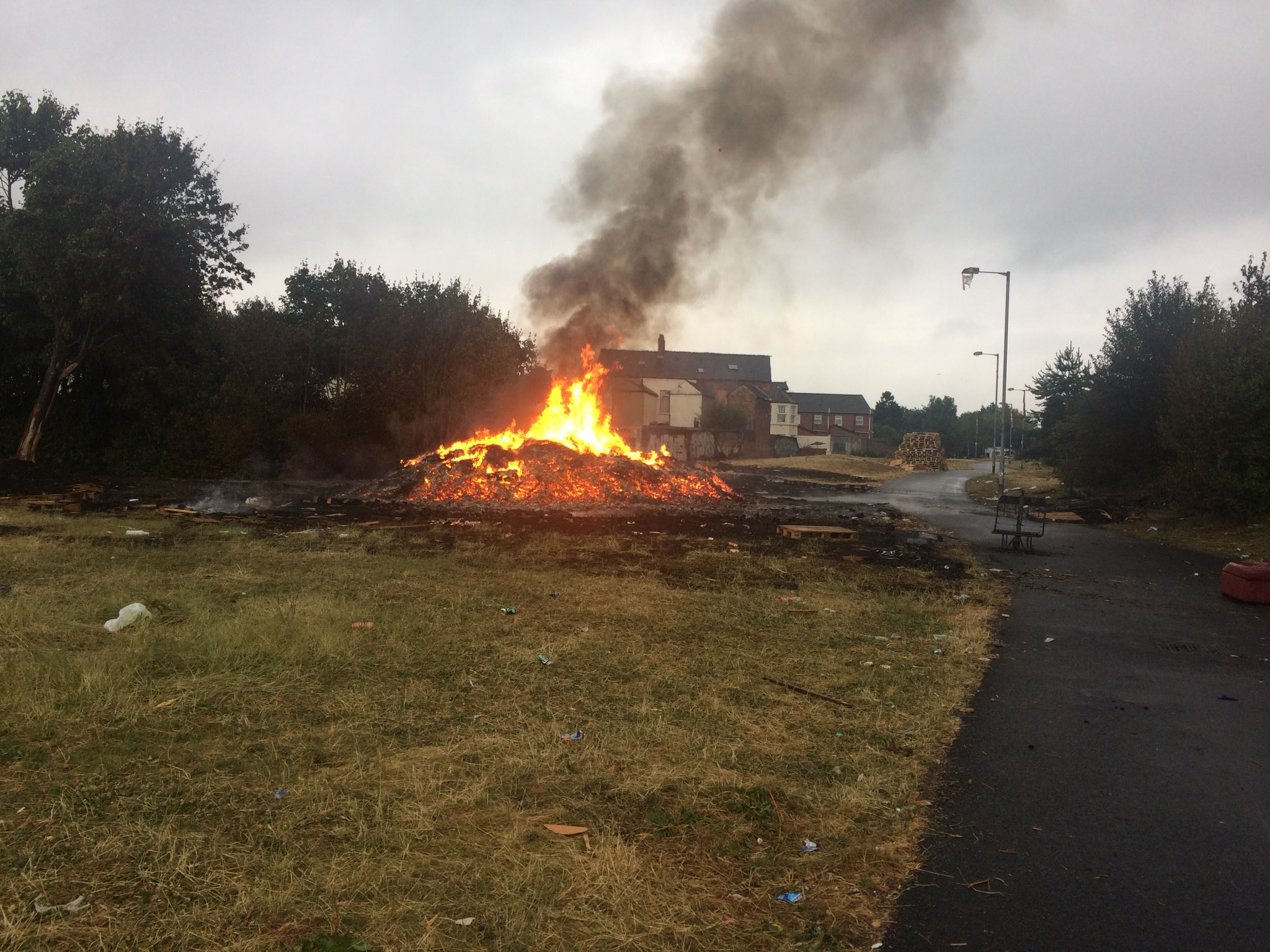 A CONTROVERSIAL bonfire in East Belfast was set alight in the early hours of Wednesday morning hours after a court ordered its height to be reduced.

Over 100 police officers in riot gear were attacked with missiles as they deployed close to the site on Bloomfield Walkway.

The Fire and Rescue service helped control the flames and protect nearby houses.

Assistant Chief Constable Alan Todd said: “Unfortunately, as police moved in to secure the site to enable the contractor to safety remove material, people on the site lit the bonfire with total disregard for the safety of the local community and threw missiles at police. Colleagues from Northern Ireland Fire and Rescue Service attended to protect a number of nearby properties.

“We also received reports of a number of vehicles having been set on fire in East Belfast.

“It is disappointing that some people decided to resort to violence as attempts were made to reduce significant threat to the life and property of local people, due to the size and location of this bonfire.

“Over recent months there has been a concerted effort by a wide range of agencies and community representatives to resolve this completely avoidable situation. I would like to thank those people for their efforts in trying to bring about a resolution to this matter. We all hoped that the bonfire builders would see sense. Regrettably this hasn’t proved to be the case.

“Moving forward, PSNI will continue to liaise with partner agencies, local communities and political representatives to address concerns linked to bonfires. While PSNI is not the lead agency on bonfires and have limited legislative power in respect of bonfires or waste which has been illegally disposed at sites, we will continue to support other statutory bodies to carry out their roles if requested.“

Earlier on Tuesday, in response to a request by Belfast City Council, Belfast High Court ordered the Department for Infrastructure to take steps to reduce the height of the bonfire at Bloomfield Walkway.

The injunction also ordered the Department to remove all excess materials from the immediate vicinity of the existing bonfire.

A Belfast City Council spokesperson said: “The judge made the order taking into account a number of factors. These included elected representative concerns, community fear and apprehension and significant risk to property and life.

“The judge emphasised that she hoped the community initiative would continue and that the people building the bonfire would see sense.

“The judge also said she will not condone unlawfulness which puts lives and properties at risk.

“Belfast City Council recognises the huge effort made by Council officers, councillors, mediators and community representatives in trying to resolve issues around bonfires this year.

“All parties in City Hall had agreed to work to improve the situation from last year. There has been some success in this regard, which is welcome; however, the situation at the Bloomfield Walkway has continued to prove difficult.

“Despite efforts, the bonfire is not at an acceptable safe height within the guidelines of the Northern Ireland Fire and Rescue Service.

“Council made a final plea yesterday evening to the bonfire builders to remove surplus material to reduce the threat to life and property.

“We will continue to work and engage with the relevant agencies and local residents over the days.”

"Whilst I am glad the Department will now have to act to protect residents' homes and lives, I regret this court action was ever necessary,” he said.

"There has been a huge investment of time and energy in mediation to encourage those building this fire to voluntarily reduce its size in line with fire safety guidance.

"As late as last night, all parties signed up to a cross-party statement, appealing to those involved to reduce the bonfire themselves in order to protect property and lives. however, regrettably they ignored those pleas and continued to build.

"We were left with no option but to pursue an injunction in order to protect local people, who have been contacting us over recent weeks in increasing distress and fear for their homes and their lives, which were being placed at risk. It would have been entirely wrong for the Council to abandon them and local Council facilities to be destroyed. That view was vindicated by the judge who said it was entirely proper for the Council to bring the case.

"We would still prefer those who built this bonfire would act voluntarily, respect the wishes of local residents and the view of the courts and remove the material: however, it is now up to the Department for Infrastructure to ensure action is taken to keep residents and neighbouring properties safe if that does not happen."