Boxing: Conlan strides on with impressive victory over Marriaga 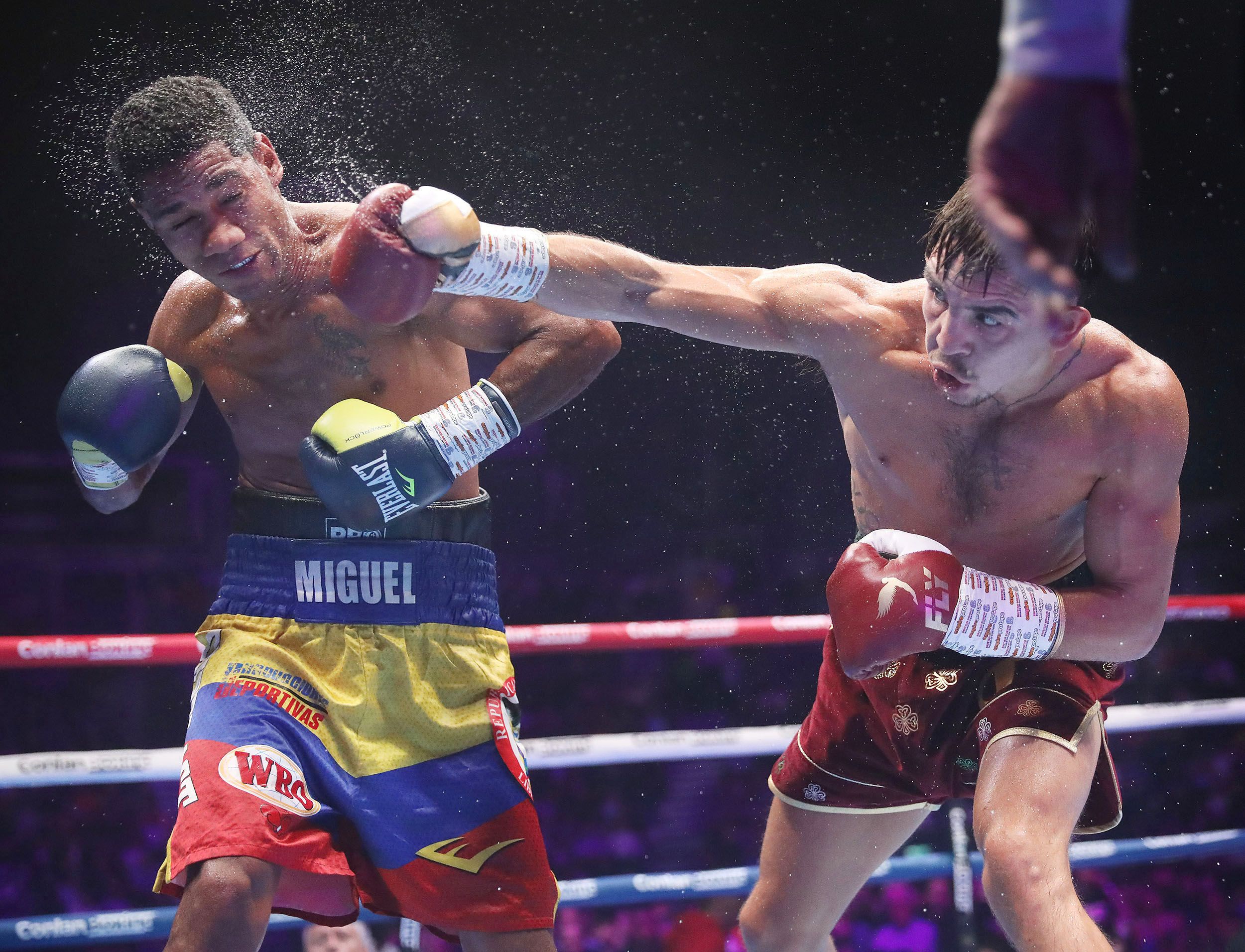 There was no letting this one slip for Michael Conlan at the SSE Arena (nee Odyssey) on Saturday as he ticked a lot of boxes against Miguel Marriaga.

Three knockdowns - two of which he generously insisted were more due to the ring canvas bar the eighth round body shot - underlined his supremacy, yet he was tagged hard at the end of the ninth and had to withstand a huge assault early in 10.

There were flashbacks to the Leigh Wood fight, but as he stated in the build-up: lessons had been learned. No need to go gung-ho - Conlan absorbed the punishment, flipping the final round on its head to finish on the front foot with heavy body shots that were key to coast to a fully deserved wide points win (99-88 x2,99-89) and throw down a challenge to the belt-holders at 126lbs.

They say you know who your real friends are when the chips are low and the 8000 or so in the arena made themselves known that they had their man's back and then some when he needed them in the final round - driving him over the line.

The blemish on his record after the Leigh Wood defeat will always be there, but right next to Conlan's name is a W - the most important stat of all as he insists to the detractors the past may be yours, but the future is his.

"That performance doesn't say I can go out and destroy anyone right now. But if Marriaga took more chances it would have given me more opportunities. I thought he would have forced the pace a bit more because when he let the hands go, I landed the body shots.

"He was more cautious and when he stepped over his front foot I was catching him."

He continued: "I want to fight for a world title as soon-as-possible but the most important thing is getting that (Wood loss) in the background. I need to get it out of my head so I hope people stop talking about it - I'm sick of talking about it."

Conlan operated at southpaw in what was a quiet opening round, pawing a prodding with little coming from the visitor.

Marriaga did go down, but from a clear slip when off balance that gave further encouragement to the raucous crowd.

'The Scorpion' had greater ambition in the second, but was tagged by a crisp left although he did land a solid right as Conlan pivoted to his right.

Both men seemed wary of one another but Conlan had the better success early, luring Marriaga in and punishing him with a right in three.

The Colombian was bobbing, weaving and looking for that perfect right hand, but was getting picked off with the jab as Conlan's head movement made him an elusive target and forced errors he capitalised on with the right to make it four rounds from four.

The visitor pawed the jab in an effort to draw a mistake from Conlan who remained poker-faced and a small glimmer of success in the fifth at close quarters proved to be his best moment of the opening half, but the Belfast man was simply quicker and crisper in his work as his moments were more plentiful in a fight that was struggling to catch fire.

Given what had happened in Nottingham, this was no bad thing as Conlan was not here for a moral victory - the harsh truth of the fight game requires win at all costs.

He popped out the right jab, went low with right hooks to the midriff and continued to the boss as the visitor followed him around the ring only to taste leather.

One wondered just when, if ever, the visitor would gamble as he had made little to no impression and he did step on the accelerator in seven, yet his advances were crude and subsequently exposed as he rushed in, tagged with a left and right that had him on the floor.

Conlan remained calm in the aftermath, refusing to waste a shot or indeed, the  energy that was his downfall in March, remaining happy to bamboozle Marriaga and stay on the front foot.

Still, he wasn't shy in making his moments count, with Marriaga advancing in eight and dropped under the weight of a right to the ribs that underlined this classy display.

A rapier-like left down the pipe in nine had Marriaga buckled and his gloves grazing the canvas to fire a third count of the evening, turning away with a look of dejection but this moment soon passed as he found a home for a heavy right hand in the closing seconds.

"I think I only dropped him once," protested the victor who was wary of the fate that befell him in March.

"The other two - that was a bad canvas. There were more demons in my head because I slipped in the 11th round against Leigh Wood. Marriaga slipped twice because of the canvas. The body shot was 100 per cent a knockdown but the rest were slips. I was slipping and was aware of that - 'don't let this happen'."

Marriaga finally went for it in the 10th and final round, landing some thudding shots that clearly troubled Conlan, but he had been here before and was in no mood for a repeat of his previous loss, spinning Marriaga and whipping home some sicking shots to the body that seeped ambition from the visitor and finishing one the front foot to finish on a high and put himself right back in the world title picture.

"Marriaga is a tough motherf***er - I felt a jab and he got me to the body so it was 'ohh, they are solid shots'," he admitted.

"I pride myself on taking good body shots and they didn't hurt me, but you could feel them.

"This fight was never meant to catch fire - I was there to put on a boxing performance and win without taking much damage.

"That Conlan in me - the Jamie Conlan inside me - wanted to do it right to the end.

"With my energy,  I didn't waste anything. I picked my shots,  did what I needed to do - box him.

The Wood rematch remains high on the agenda, but realistically is a long way off as the Nottingham man looks set to face Mauricio Lara or more realistically, Kiko Martinez before a showdown with Josh Warrington next year.

Just where Conlan goes is up to his team but there are options after this impressive win.

"I'll fight anyone," he insists.

"I want to fight for a world title so whatever is next is next, but now I'll go on holiday, relax and reassess everything."