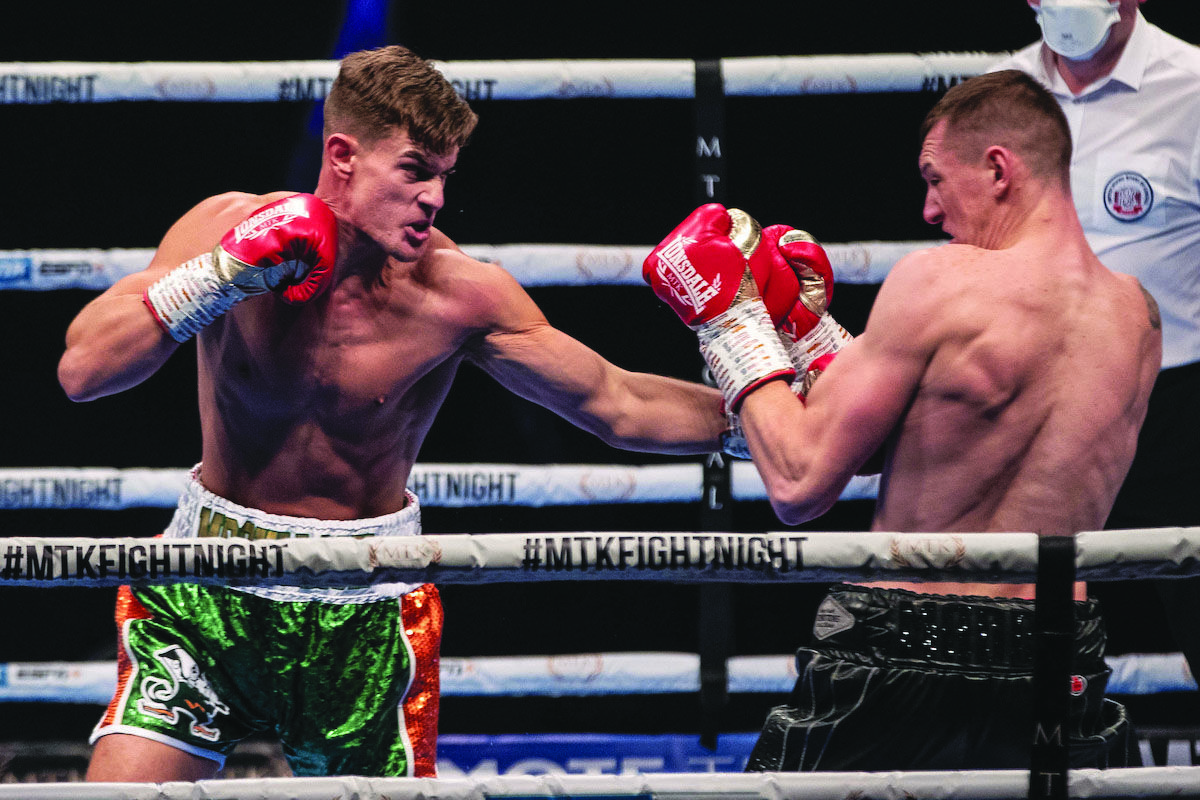 McCullagh was successful in his debut when stopping Ben Thomas in the third round last October and gave a glimpse as to what to expect going forward with his noted power-punching coming to the fore.

It has been a rather strange start to his career with his debut and this Saturday’s fight taking place behind closed doors, so the usual fanfare and support an up-and-coming prospect can usually expect hasn’t been there, but just to be able to get into the ring is a major plus with the number of slots available for fighters much less than usual due to the pandemic.

Still, the win over Thomas gave McCullagh a glimpse into what professional boxing is all about and having banked the experience from his debut, he says he goes into Saturday’s fight much more relaxed.

“I’m lucky enough to have got out twice,” he said.

“I was thrilled with how it (debut) went. It was a whole new experience for me, fighting behind closed doors and all of that, so it was a bit strange.

“I was making my debut so I was just getting into the swing of things with how the whole pro system worked in terms of weigh-ins, getting called out and whatever.

“I know what to expect this time so I’ll not be as anxious. I’m actually more excited for this because I know what is going to be ahead of me and have done all the hard work.

“I’m just looking forward to getting over there and getting the win, so I can get home and spend time with my family.”

There have been some changes since that win, with the West Belfast man relocating back home to be trained by his father, Paul Snr, and uncle Sean having initially been under the guidance of John O’Brien out in Spain.

The experience of being away from home during a turbulent time wasn’t without its merits as McCullagh says it has helped him grow as a person.

However, he says being back in Belfast on a full-time basis is a much better fit and he feels it will help him settle into his career much better.

“I’m back here to live and training with my family members,” he confirmed.

“It was a good decision I think and has worked out best for me to come back as I’m around people who really care for me and who can get the best out of me.

“Going away helped me too, as it helped me be more mature and it was great to get that experience to go and live away from home.

“I’m glad I did it as it’s something that needed to be done but coming to the end of that time, I just knew it wasn’t right for me.

“It was good to get that valuable experience so I wouldn’t change any of it for the world. It actually did me the world of good to be honest.”

Standing in his way this weekend is 35-year-old Wolverhampton native Woolery who holds a 2-3 record.

‘The Bull’ has been stopped just once and that was in his last outing against Isaac Chamberlain, but that highlights that he has already mixed it in decent company.

McCullagh expects the Englishman to be ambitious on the night and not just try to survive for the four rounds, a prospect that appeals.

“I watched a few of his fights,” said the former Ulster Elite amateur champion.

“He’s fought in the cruiserweight division, fought against Isaac Chamberlain who is up-and-coming, so he is no mug. He’s been in and fought in the Ultimate Boxxer series, which is like Prizefighter, so I’m not looking past him at all.

“I know he’ll come to fight, like my opponent did in my debut, so I’m not fighting a taxi man here. He’s coming in to win and I am prepared for that.

“I’m not looking past him, but I know I’m ready and have done the work so I’m confident that I’m getting the win.”

The early stages of a professional career are all about gaining experience and facing different styles to serve the apprenticeship and McCullagh says he is happy with how he has been matched so far.

When the bigger tests inevitably come later in the career, he says he wants to have found out a little about himself so taking on opponents who will offer resistance at this stage is vitally important.

“It will work out for me in the long run because once I have to step up, I’m not going from somebody who is lying down to somebody who is going to give it a go,” he continued.

“I (will) have already experienced that in my first couple of fights that I’m going in and getting the rounds in. I’ve started at a higher level so once I start moving up, this will stand by me.”