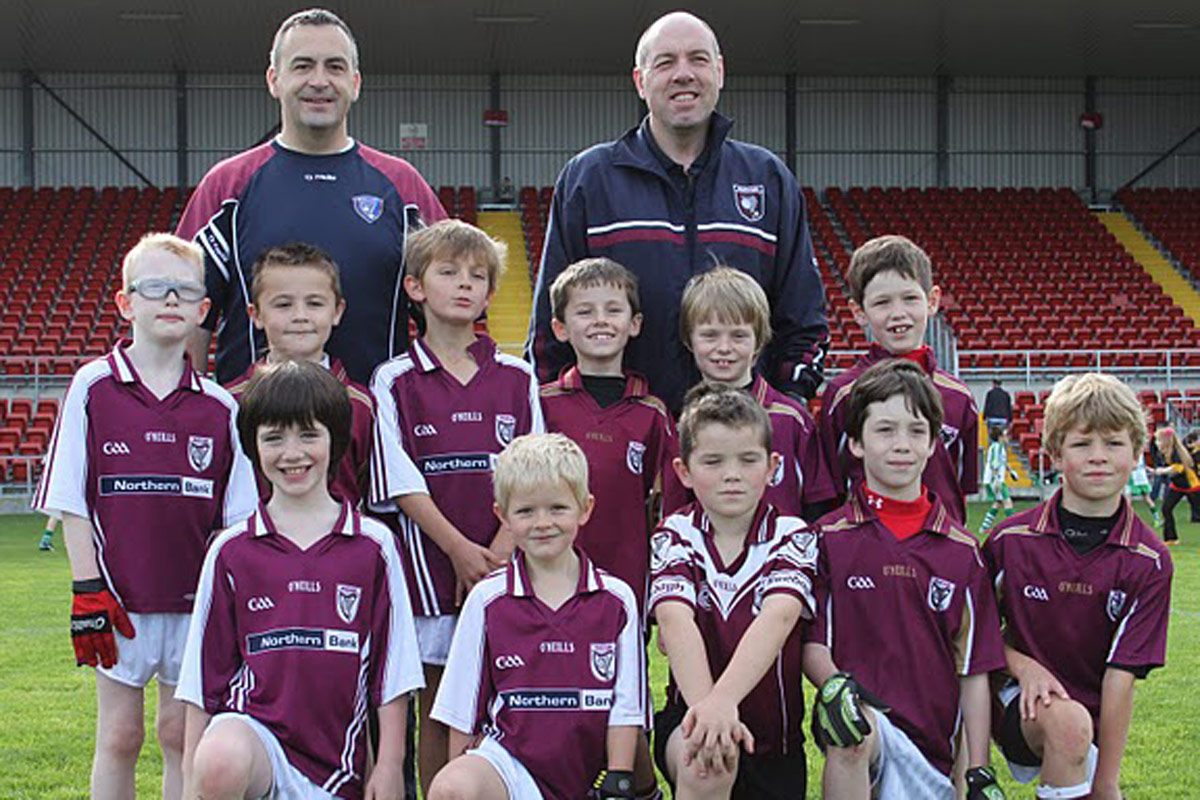 Bredagh would like to express their appreciation to the Newry Shamrocks club for organising such a terrific tournament.

The 18 teams represented a considerable challenge to the Bredagh lads, but they were determined to reach the final group phase and overcome any team they met en route.

Game One: Killeavy B

Peter O’Hagan was completely reliable as goalkeeper but with such a strong defence of Liam Rogers, Oisin Tracy and Eamon McPeake (0-1) he saw little direct action.

Together with the midfield three of James Gormley, Matthew Rooney (0-2) and Oran Magee (2-0), they shut out Killeavy’s efforts to score.

In the forward line Emmett Rogers, Rory McCann (0-4), Jarlath McCollum (0-2) and Ronan McPeake reaped what their teammates had sown as Bredagh ran out winners by 2-09 to Killeavy’s 0-0.

Eamon McPeake swapped with Peter O’Hagan as goalkeeper to close out the game.

Teconnaught started strongly with a few passing movements but Bredagh managed to eventually dictate the play.

Matthew Rooney opened the scoring with a long kick for a deserved point. Jarlath McCollum slotted over another from short distance and Oran Magee took an excellent point from breaking play.

Jarlath McCollum put the icing on Bredagh’s performance by scoring a goal near the end.

Ballyholland opened the scoring with a point from a long kick into their forward line.

But Oran Magee soon got to grips with the threat while Liam Rogers showed strength and skill at midfield.

James Gormley, as always, worked effectively, bravely and with unbelievable determination to hold Ballyholland out of the Bredagh half.

Bredagh had achieved their first objective of reaching the Cup competition and now met a determined Saval team.

Peter O’Hagan and Eamon McPeake rotated positions in goals, with both lads showing great commitment and resolve. Liam Rogers was again fully involved in the defensive line and together with Oisin Tracy snuffed-out much of the Saval play. Oran Magee controlled midfield while Rory McCann (3-1) showed a lot of skill and flair.

Matthew Rooney was safe under the high ball and showed great vision.

James Gormley, Ronan McPeake and Jarlath McCollum (0-3) pinned the Saval defence back and helped Bredagh to a 3-04 to 1-01 win.

This proved to be Bredagh’s toughest game, against a very strong team who were undoubtedly the tournament favourites.

Burren controlled possession but were unable to impose themselves.

James Gormley worked fearlessly and Oran Magee enjoyed a few spells of dominance in midfield, with Rory McCann and Emmett Rogers both striking the Burren posts.

Liam Rogers, who had given his all in previous games, was content to swap with Peter O’Hagan as goalkeeper in the second half.

This brought a fresh impetus to Bredagh as Peter showed what a valuable player he is outfield as well as in goals. However, the Burren lads proved too strong with the final score Bredagh 0-0 Burren 3-04.

The U8s brought great credit to themselves and the club throughout the day.