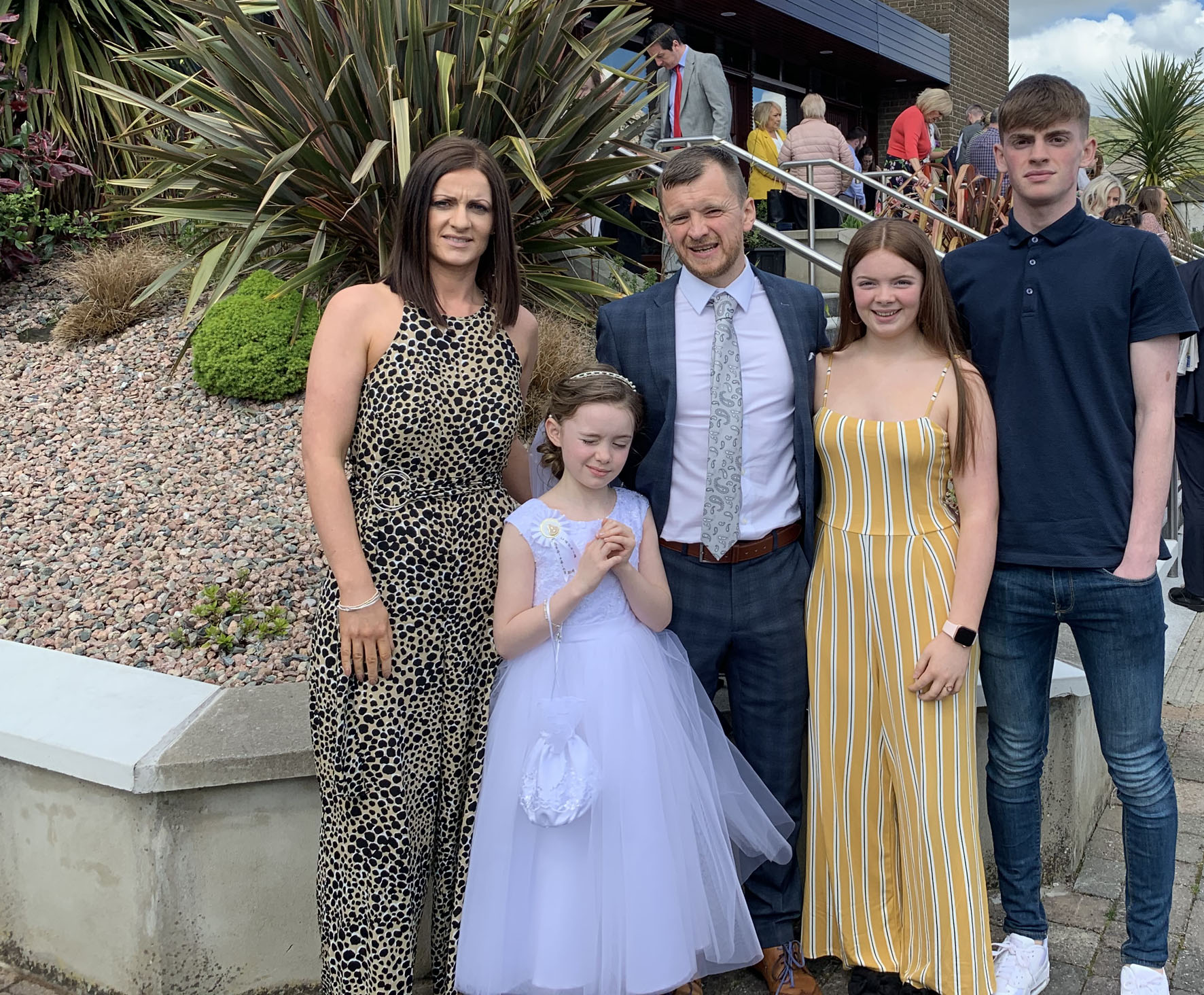 ISOLATING: Seán Mac Mánais pictured with his wife Marian, his daughters Siân and Cadhla, and his son Conall.

Bunscoil Phobal Feirste teacher and sportsman Seán Mac Mánais, a kidney transplant recipient, spoke to RTÉ Raidió na Gaeltachta about the danger of COVID-19 for people like him, and about  isolating in his home since 12 March.

Seán Mac Mánais from West Belfast is a teacher in Bunscoil Phobal Feirste, and a former football and hurler with O’Donova Rossa GAA, where he now trains the senior hurlers.  Seán is Chairperson of Cumann na mBunscol Aontroma, and on the board of management of Gaelfast.  He explained in the interview with Áine Ní Bhreisleáin how he had received a call from his doctor on 12 March advising him to isolate.

“He said, you’re in danger here, because of the medication and that.  It (COVID-19) could be really serious for you.  I got sick in 2010, and for most people it would just have been a very bad cold, but I was in hospital for a month.  He was talking about that as an example of how this wouldn’t be the same for me as for someone else, so that I’d have to stay at home.  And that everyone else in the house should stay home too, and keep their distance from me for a set time. I made my decision that day, and I haven’t left the house since.”

Seán said that it was a challenge to pass the day, but that he was taking the opportunity to catch up on podcasts and reading, and getting up to scratch on distance learning.  He’s also helping his two young daughters with their schoolwork.

Seán celebrated his 40th birthday on 31 March, and says he got a great lift from the efforts of his family and friends, who came to serenade him from outside the house, and to deliver gifts, while he and his family watched from inside.

“Yeah they came to the house ... the family first of all.  They stayed out on the road of course, but they were playing music, and they left presents and drinks in the garden.  And then the Rossas came and they did the same, so it was good craic.  It really gave me a great lift at the time, so I was delighted.”

Seán implored people to follow the advice of the health authorities, and said that we need to remain hopeful that better times are ahead.

“In the end, this will pass ... When we look back on it, we won’t think it was a terrible time or anything... We have to be hopeful.”

“All we need to do is to follow the advice (of the authorities), and if we all do that, then we’ll come out the other side and it will reduce the damage and the  impact of this pandemic.   That’s how I feel.”