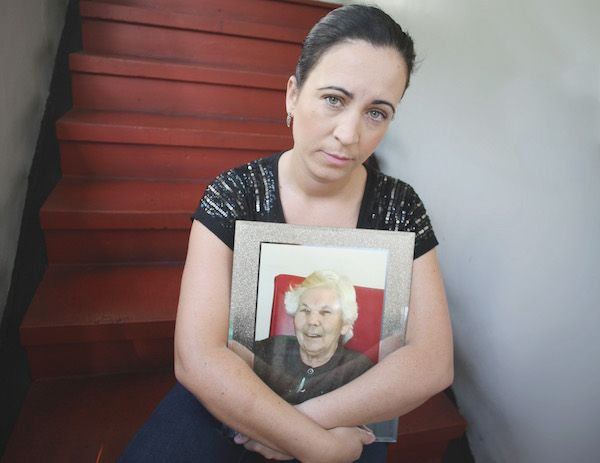 Julieann McNally with a portrait of her grandmother Annie

A WEST BELFAST woman who spearheaded a campaign for a probe into Dunmurry Manor Care Home has given a cautious welcome to the creation of a new company that will manage the facility.

Kathryn Homes, which will be headed by former health watchdog directors, is now responsible for operations at Dunmurry Manor (now Oak Tree Manor) and 11 other care homes previously managed by the beleaguered Runwood Homes.

A 2018 report by the Commissioner for Older People, Eddie Lynch, found that residents at Dunmurry Manor had suffered neglect, while one vulnerable woman was sexually abused by a resident.

The PSNI subsequently launch a criminal investigation into allegations of mistreatment at the home.

Last year, it was revealed that Clifton Nursing Home (now City View Court) had failed a number of inspections by the regulatory body the Regulation and Quality Improvement Authority (RQIA).

The watchdog found problems around governance, management and leadership, as well as serious issues which were affecting the robustness of infection prevention.

Following the report, action was also taken last year by the Belfast Trust and Department of Health to relocate residents from the home due to concerns about the way it was being run.

Kathryn Homes, which will be led by former RQIA Directors Theresa Nixon and Dermot Parson, said the shake-up at the homes signify “a new dawn of accountability".

“Runwood’s profile in Northern Ireland has been continuously going down for a long time given some of the inspections and some of the incidents within some of those care homes,” she said.

“I suppose it has been a long time coming to have a board or some sort of organisation in this country that we can engage with.”

Ms McNally said CHASNI would put the new structures “to the test” when needed.

Kathryn Homes, a new company with a local Board of Directors, has been established to manage a portfolio of 12 care homes across Northern Ireland with the aim of enhancing the care provided to all residents ➡️ https://t.co/DLytz0V58G pic.twitter.com/aF4BWWmmd3

“Collectively, the wellbeing of residents is our number one priority," he said. "In our new roles we are dedicated to providing safe, comfortable homes where residents can receive the right care based on their needs as well as preferences. We recognise there are opportunities to improve the care delivered, and are committed to investing in learning and development for our team to ensure ongoing innovation across nursing, residential, dementia, respite and palliative care."

Mr Parson said the feedback from residents who have moved to refurbished rooms at the care homes had been "excellent".