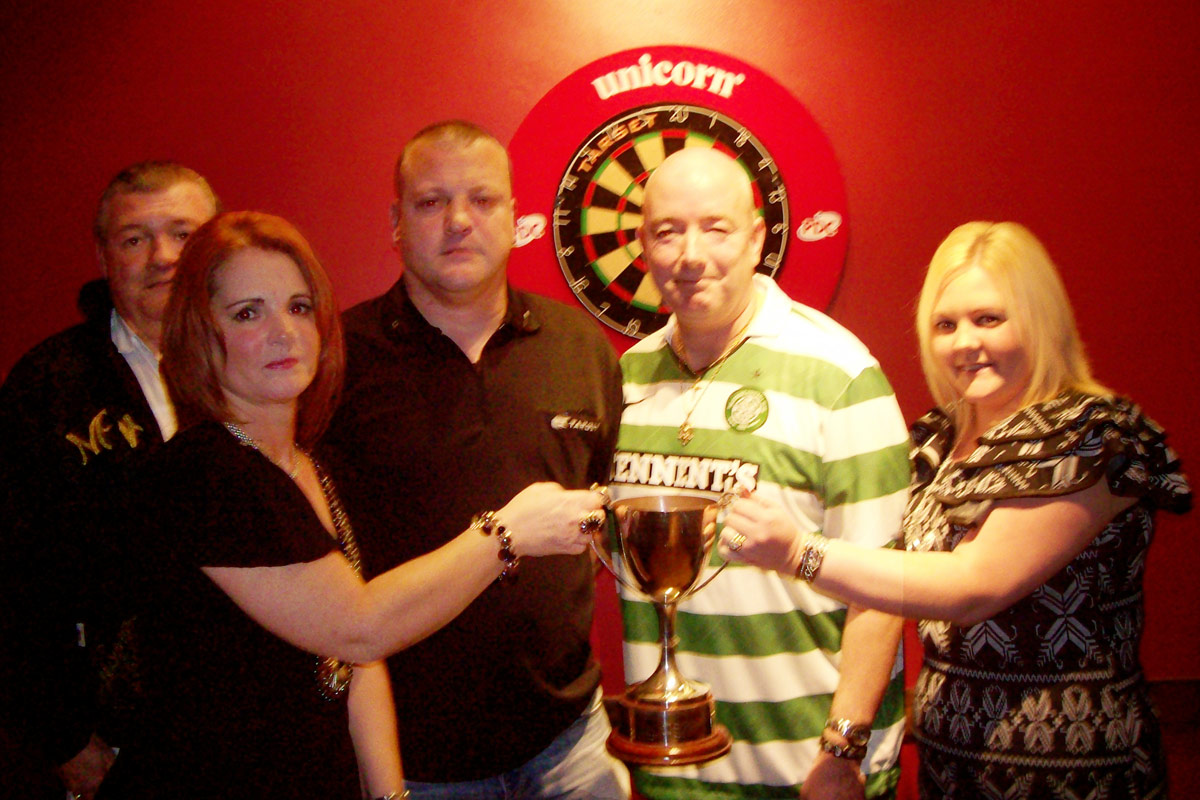 The main focus of attention in this week’s Fonacab League programme was the climax of the Andy Kearney Pairs competition in the O’Donnell’s club on the Whiterock Road.

Sixteen of the league’s top pairs had steered their way through some tricky preliminary matches last week, and all were chomping at the bit in their quest to lift this coveted prize.

With three boards in operation, and all games the best of three 701 rubbers, the crucial first round draw saw some interesting clashes emerge.

Board one got proceedings under way and Charlie Johnston and partner Arthur Hughes of Casement put in an impressive display to oust the O’Donnell’s double act of Micky McLarnon and Harry Smith on a 2-0 score line.

It was the same outcome in the next game as Joe Doone and Charlie Press, also of Casement, did all that was asked of them to end the challenge of the father and son partnership of Peter McDonnell Snr and Jnr of Clonard.

The last game on the board proved to be an all-Hibs affair with Adam McDade and Gerard O’Hanlon crossing swords with team mates Richard Mervyn and Damien Corbett.

In a great contest McDade and O’Hanlon were pushed all the way before coming through on a tight 2-1 result.

Board two saw all the games finish on 2-0 results, but it was much harder than the score lines suggest.

Board three produced the last two winners on the night, and some cracking arrows were dispatched in these games.

In the opening clash Crumlin Star pair Ben Lagan and Peadar McAlorum looked sharp in the opener, winning in 27 darts but their opponents, the defending champions Andy McConnan and Martin Crossan of Trinity Lodge, responded with some aplomb winning in 28 and 30 darts, which included a great 180 from McConnan.

The last game was also a close run affair and it took all the know how of Paddy McCorry and Conor Wylie of Trinity Lodge to ease past Shamrock United duo Paddy McAleese and Gerard Burns.

We were now at the quarter stage and were down to a two board scenario.

Board one saw Andy McConnan and Martin Crossan of Trinity Lodge drawn out to face Casement pair Arthur Hughes and Charlie Johnston.

In a great contest the Trinity pair emerged victorious on a 2-0 result but it must be said the Casement duo had chances at the double in both games but spurned the chances when they presented themselves.

The next game was also a cracking contest and again both pairs gave a good account of themselves.

This one went to a decider and after both had opportunities to claim the win, the bragging rights went to Trinity Celtic pair Colum McGoran and Damien McStravick, who sufficed over opponents John McCann and Gerry Walsh of Trinity Lodge.

Board two kicked off with Kevin Campbell and Mark Di Lucia of Trinity Celtic coming up against experienced opponents Joe Doone and Charlie Press of Casement.

As things panned out the Celtic duo were in great nick with Di Lucia peppering the treble twenty. They comfortably came through what could have been a tricky encounter on a 2-0 result.

The last game of the round had the crowd drooling as the darts were right out of the top drawer and it featured Hibs pair Adam McDade and Gerard O’Hanlon against Trinity Lodge men Paddy McCorry and Conor Wylie.

In the opening game the Hibs pair left themselves a double, but were left shell shocked as in stepped McCorry with a 25, treble 19 and bull to take out a fabulous 132 finish.

The Hibs lads recovered their composure to take the next game and send it into a decider.

This one was also a close-run affair and at the business end of proceedings McDade, with a big maximum 180, gave the Hibs pair a slender advantage.

When they got their chance at game McDade hit a 25 when requiring the bull with his last dart and then young Conor Wylie calmly slotted home a 78 outshot to enable the Trinity pair to progress.

The semi-final pairing proved to be an all-Trinity Celtic affair and featured Kevin Campbell and Mark Di Lucia pitched in against Colum McGoran and Damien McStravick.

Again Di Lucia and Campbell rose to the occasion and with a succession of great scores, and clinical finishing, they came through on a 2-0 result to make the grand final.

The second contest turned out to be a much closer game and saw an all-Trinity Lodge affair with defending champions Martin Crossan and Andy McConnan facing Conor Wylie and Paddy McCorry. Both camps were in the groove from the outset and the crowd was treated to a succession of great scores.

With the scores standing at one apiece, it would be the team that grasped the opportunities who would make progress. Both sides had their chances at game but it proved to be Crossan and McConnan who claimed a final spot with a hard-fought win.

Jim Taggart and John McCann took charge of the final and it was now the best of five 701 games.

Both pairs made a nervous start in the final and it was Crossan and McConnan who poked their noses in front thanks to a crucial double coming from McConnan.

This proved to be the wake up call opponents Campbell and Di Lucia needed as they upped the ante in the next game with a 140 and three tons culminating in a double four from Campbell to put him and partner Di Lucia back on level terms.

The next game proved to be crucial as Campbell was on fire early doors as both players hit a 140 and ton each in their twelve darts.

They looked to be on course for an easy leg win but McConnan and Crossan responded with a string of big scores, and amazingly were first to the double. Crossan failed with his double attempt and had to suffer as in stepped Campbell to slot home the winning score to edge his side in front.

Campbell and Di Lucia had darts in the next leg but they saw opponents Crossan and McConnan make the better start and they looked to be on course to square thing up.

Di Lucia had other ideas and he pulled out a magic 75 finish - 17, 18 double top - which enabled him and partner Kevin Campbell to be able to call themselves Andy Kearney Pairs champions.

The League committee would like to take this opportunity to express their thanks to the O’Donnell’s club and the Kearney family for their generous sponsorship in this great competition.

On a sadder note the committee and teams in the league would like to express their condolences to St Matthew’s player Billy McDaid on the sad loss of his father Gerry. May he rest in peace.

To catch up on all League results and fixtures etc just visit www.centraldartsleague.com