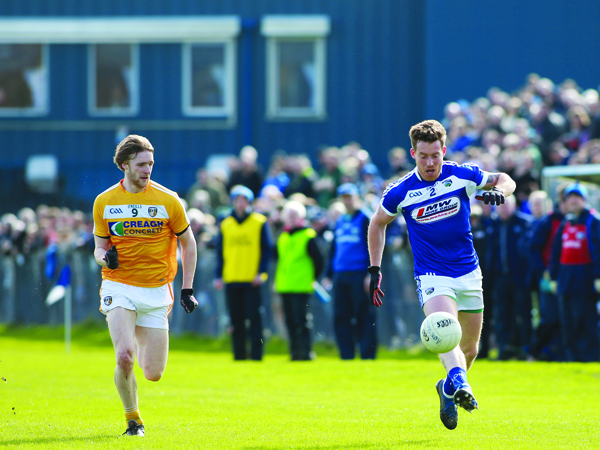 THE big occasion. It’s what every player dreams of from a young age. Running out to the roar of the crowd, parading around the field behind the band. It’s what Irish summers are all about for footballers and hurlers.

At the beginning of this year, Antrim’s management team of Gearoid Adams and Frank Fitzsimons decided it was time to cast the net for fresh talent to replace many of the familiar names who had decided to step away.

The Dr McKenna Cup opener against St Mary’s College saw a host of new faces given their opportunity with some faring better than others. One of those who did impress in defeat that day was Stephen Beatty.

The 24 year-old didn’t start the game, but was sprung from the bench after 21 minutes and was certainly one of the newcomers who caught the eye, kicking a point and impressing at midfield. Beatty, who has represented Antrim’s hurlers in recent years and was part of the panel that reached the All-Ireland U21 final in 2013, had his chance and took it with both hands.

This Sunday at MacCumhaill Park in Ballybofey, he will almost certainly get the opportunity to show what he can do on the stage he has always dreamed of.

“This is the main reason I decided to play football this year,” said the Rossa man at Monday’s open night.

“I was actually meant to go to the hurlers, but the more I thought about it, it was a case of watching the Ulster Championship every year and thinking 'I would love to play in that'.

“It has come around quick enough. I remember thinking when the draw was made thinking it was donkeys away, then two months ago saying there were 15 sessions left and now there are just two sessions left.”

That game against St Mary’s proved that Beatty was equally adept with the big ball as the sliotar and has been a mainstay of the Antrim midfield this year.

“Thankfully, Gearoid and Frank kept faith in me and let me continue to play,” he continued.

“I had been going well apart from that Armagh match, well up until that minute of madness (when sent-off in the latter stages following a clash with Ciaron O’Hanlon).

“I feel as if I have been going well and playing the best football of my life. This is the fittest I have ever been and have taken my opportunity when it came.

“I haven't been complacent about it. I just want to work hard and that's what I have been doing.”

In recent years, Beatty has shown his worth in the blue and gold of Rossa, but making the step up to inter-county level was a different challenge altogether. Division Three contained some top-class sides including last year’s All-Ireland semi-finalists, Tipperary, Ulster rivals, Armagh and Louth who were promoted along with Tipp.

The fitness levels and pace of the game were notable differences, but instead of shying away, Beatty knuckled down and more than held his own throughout.

“It was a big step-up, the pace especially,” he admits.

“Playing midfield most of the time, you are coming up against big men and I wouldn't be the biggest.

“Playing against Tipperary in the first League game was incredible because you were listening to the build-up about playing against All-Stars. I remember running out thinking that as a kid, this is what you always wanted to do.

“Antrim clubs are very good, a good standard, but this (inter-county) is a different kettle of fish playing against bigger men, faster men, fitter men who have been playing at this level for years. It's been a great experience.”

It will be an even greater experience this Sunday when Antrim come up against one of the top teams in the country, Donegal. The Tír Chonaill men contain some household names including Ryan McHugh, Paddy McBrearty and Michael Murphy who captained his county to All-Ireland success in 2012.

Antrim go into the game as the longest of long-shots, but then again, they weren’t exactly fancied when travelling to Ballybofey in 2009 when they came away with a one-point win en route to reaching that year’s Ulster final. It couldn’t happen again, could it? Beatty believes that with a bit of luck, anything’s possible.

“We have put the work in. We know what way we are going to play. We have watched how Donegal play over the years and admire them. They have a few Allstars on there, but it's just 15 men against 15 and anything can happen.”

Antrim will be without a number of experienced Championship performers this weekend including captain, James Laverty, Kevin O’Boyle, Kevin Niblock and Connor Murray. That means Beatty will likely not be the only one making his Championship debut, but then, Donegal also will be giving a number of newcomers a first start in provincial competition.

Like Antrim, Donegal are in something of a period of rebuilding with a number of their own leading lights over the past few years having stepped away from the inter-county arena, so nerves are certain to be present in both dressing rooms prior to throw-in.

“It's like two teams in transition in a way,” agreed Beatty.

“They were putting in good performances in the League, but there is no reason why we can't be there or thereabouts.

“I'm really looking forward to it. If there was one team I was asked who I would like to play against, it would be them.

“You want to play on the big days in front of big crowds, so hopefully it's a good day for us.”

There will undoubtedly be a big crowd present with Donegal fans hopeful this is the first step on their road to regaining the Anglo Celt Cup or perhaps even Sam Maguire.

There is the added buzz leading into the Ulster Championship with the big build-up and everything analysed to the nth degree. That brings pressure, but Beatty says that’s why he is here.

“I had the choice to make between hurling and football this year, but there is a higher prestige with Ulster football,” he explained.

“I remember saying to my dad I always wanted to play in the Ulster Championship, it's something I have aspired to do.

“A few years ago I was in the crowd on a sunny day watching Antrim play Tyrone (2010) and thinking one day I want to be out there. Thankfully I have the opportunity to fulfil that ambition now.”

The Ulster Championship is as big a stage as they come. It’s an arena where players are tested to the limit. So far Stephen Beatty has passed his inter-county test with flying colours. He will be hoping he and his Antrim team-mates will do the same this Sunday.