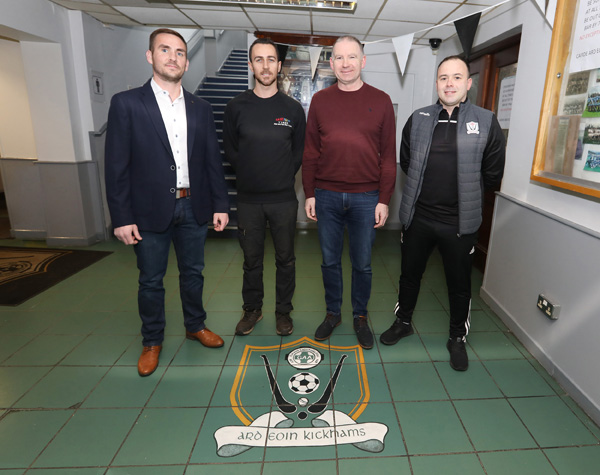 ARDOYNE Kickhams chairman Philip Taggart hopes the appointment of Ross Carr will be a springboard for a brighter future at the North Belfast club.

The former Down senior football manager and two-time All-Ireland winner was, surprisingly, announced as the new manager of the 2019 Antrim Junior Football Championship finalists.

Kickhams lost out to St Patrick’s, Lisburn in last year’s decider, but gained promotion to Division Two after finishing as Division Three runners-up behind St Paul’s.

At the end of the season, it was confirmed that Pádraig Ó Muirigh was set to return to his native St Gall’s as Sean Kelly’s replacement, leaving Ardoyne with a managerial vacancy for the 2020 campaign.

While there is little doubt that Ó Muirgh improved standards at the North Belfast side, few would have envisaged his successor being such a high-profile GAA personality.

His appointment is a huge coup for Ardoyne and Taggart hopes the Down legend can inspire the North Belfast outfit to move past their Junior Championship defeat to Lisburn.

“We were very disappointed to have lost that game,” said Taggart.

“After the season was over, Paddy went to St Gall’s. We can’t blame him as that’s his home club and he wanted to do something there. It left us with a vacancy.

“We are delighted to have someone of the experience of Ross Carr and his reputation to come to North Belfast to our club. We are into Division Two for this season and the team is keen to more forward and do well in the league.

“The team felt they wanted an outside manager and we had meeting as to how we could move forward with it. We had a few people who were initially keen on the role, but it didn’t work out for one reason or the other.

“We hosted a mental health day down at The Cricky and Ross Carr came along to that event and that’s when the conversations began.”

Taggart added that he sees Carr’s appointment as a huge boost, not just to Ardoyne Kickhams, but to the entire GAA community in the North of the city.

“Ross Carr’s position is senior football manager in our club, but I also look at it as a great boost for our club and our entire community,” stated Taggart.

“He is coming to manage our senior football team, but also to look at our youth development and see how we can improve that.

“There is also an opportunity for us to go into the schools and try and encourage them to take up Gaelic football, hurling, handball and camogie.
“This year we will be introducing camogie back into Ardoyne Kickhams as well.”

Carr will have little time to settle into his new role with Divisions Two and Three of the Antrim All-County football leagues set to commence on Sunday, March 1.

Division One will start on Sunday, March 29 with the hurling leagues provisionally scheduled to begin on Sunday, April 19.

Having gained promotion from Division Three alongside champions St Paul’s, Ardoyne’s first objective will be to retain their Division Two status.

That won’t be an easy task in a division which includes the likes of Intermediate champions Aldergrove as well as Moneyglass, Dunloy and St Teresa’s after the latter dropped down from Division One.

Another challenge for Carr will be the high number of soccer players in the club.

The likes of Aidan and Joe McNeil and Brendan O’Neill play for NAFL Premier Division champions Crumlin Star while the Lynch siblings, Kevin and Padraig, are at Belfast Celtic.

With their Division Two campaign set to start four weeks from Sunday, the GAA season will encroach on the soccer season for around two months, while an extended run in the Junior Football Championship could see another overlap for Ardoyne at the end of the summer.

Of course, the challenge of players balancing commitments to other sports or indeed other codes isn’t unique to the Kickhams and Taggart said the new manager is coming to Ardoyne fully briefed on what he can expect.

“In my conversations with Ross, I’ve made that clear. I also have to commend the lads, because they still want to play Gaelic football for Ardoyne Kickhams. I explained to Ross what the situation is like in the city and in areas like Ardoyne.

“We also had a meeting with the team and they are fully committed to making this work. Ross is going to bring in new techniques to move the thing forward. As the chairman and on behalf of the committee, I wish him all the very best.”