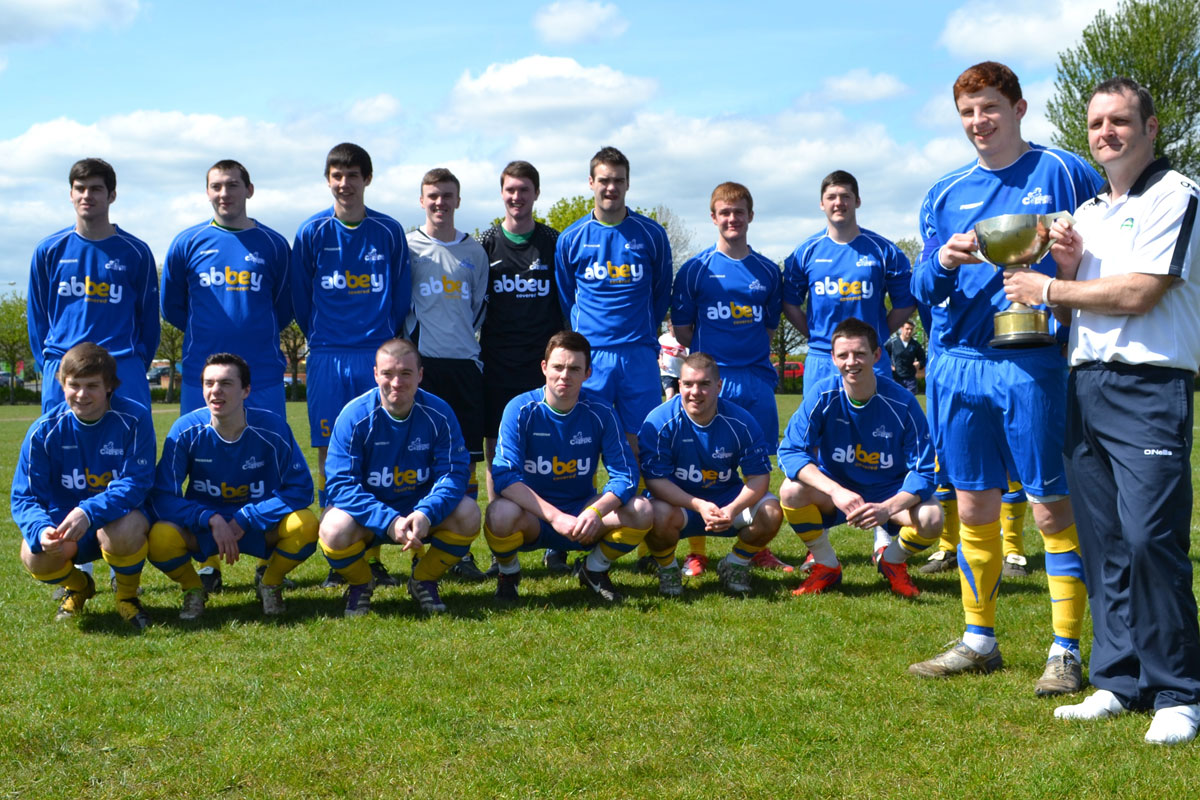 The U17 team produced a great performance to get the point they needed to claim the First Division title against an excellent Ards Rangers.

It was a superb achievement for manager Paul Dale and coach Dessie Wilson.

Goalkeeper Scott Harkness, who has been superb all season, again showed his ability particularly in the first half as Ards had the wind at their backs.

But the back four were outstanding against a very good Ards strike force with Cormac Dale and Ben Hanna winning every ball  with Donal O’Kane the personification of coolness.

But man of the match was left back Karl Watson who was not only excellent defensively but gave his side real impetus going forward.

Carryduff created a few chances of their own and the equaliser came on the 36th minute when Matty Ramsey hit a superb volley into the top left hand corner. Ramsey and Scott Croskery began to dominate the midfield and when Carryduff came out for the second half it looked like they were going to ensure the league title with a victory.

Alex Burgess twice went close when through on the goalkeeper but any thoughts that it might not be his night were allayed when he drove home 15 minutes into the second half.

It followed a great run and pass from Josh Eccles, who played a real captain’s role all night. Colts suffered a blow when the outstanding Watson had to go off injured but his replacement James McClure worked hard on the left while Ryan Reid excelled.

Colts nearly had a third when Conor Thompson robbed the defender in his own half but Eccles fired over and went close again.

Any thoughts that the title would be won easy were dissipated when Ards pulled a goal back but stout defending and excellent defending from front to back saw the Colts over the line. A terrific achievement and an excellent team performance.

Carryduff Colts had a memorable night for its underage teams who compete in the South Belfast Youth League on Saturday evening.

The club won the U12 and U17 First Division titles while the U12s completed a memorable season by completing the double by beating Holywood 4-3 in the cup final on Saturday night.

On hand were SBYL chairman Rab Johnston and league official Denis Campbell to present Gary Wilson’s U12 squad and Paul Dale’s U17 squad with their trophies.

With the senior team also winning the Newcastle League Division Two, the club has completed its most successful season in its nine-year history.

Coaches, parents and players packed out St Joseph’s Hall and heard club chairman Eamon Deeny thank them all for their contribution to the growth and success of the club since it was formed in 2003. He also highlighted the role of the club’s committee who work tirelessly and the officials of the SBYL.

Deeny reminded the audience that in its first season, the club had one team who could barely score a goal never mind win a match.

“Carryduff Colts is now very much an established part of the local community and that is evidenced by the fact we have nearly 400 players in our club now – remarkable achievement in just nine years,” said Eamon.

“Winning three league titles and a cup for the first time is just the beginning. This club is about providing development opportunities in a safe environment for young people. Winning trophies is a bonus, but it’s a bonus we could get used to.”

The evening concluded with the 150-strong audience giving  a standing ovation to the championship winning teams.

Carryduff Colts will be holding a dinner dance at La Mon Hotel on Friday, 1 June, followed by a disco by U105 star Johnny Hero. Tickets are available from the club’s committee.