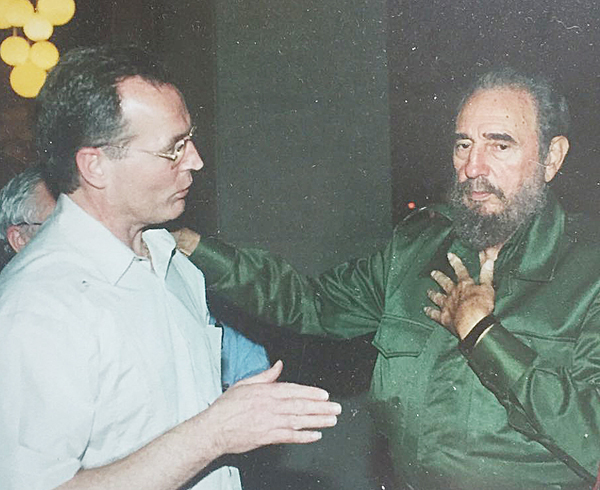 SINN Féin MLA Gerry Kelly has spoken of his meeting with Fidel Castro and how the late Cuban leader spoke of his admiration for the hunger strikers.

Gerry Kelly accompanied Sinn Féin President Gerry Adams to Cuba in 2001 for the official unveiling of a memorial to the 10 men who died in 1981 and the MLA said he vividly remembers their midnight meeting with the socialist leader who died last week.

“Fidel ate at midnight and I remember that was the time we had our meeting with him. He was very conversant with the Irish question and we talked about being ex-prisoners. I told him he was the only world leader who had stood up for the hunger strikers and spoke out in support of them and he suddenly became very animated. He told me in great detail about what he had said about Bobby Sands and where he was when he said it. He told us he thought of the hunger strikers as men of great sacrifice.”

In September 1981 Castro, addressing a crowd in Havana said of the hunger strikers, “Irish patriots are writing one of the most heroic chapters in human history. They have earned the respect and admiration of the world, and likewise they deserve its support. Ten of them have already died in the most moving gesture of sacrifice, selflessness and courage one could ever imagine.”

Gerry said he was also knowledgeable in wider Irish affairs.

“Over a long period of time we covered everything from agriculture to trade and the issues of colonialism. He was very friendly and had a huge intellect.”

Since his death there has been significant criticism about Castro’s rule.

“We talked to a large number of people while we were there and they weren’t entirely uncritical by any means. We spoke to religious groups before we left on the trip and again when we were there.

“You have to compare Castro with Batista (the right wing dictator he overthrew). When you look at that then there is no comparison.

“Castro will be remembered as a medical internationalist. During our visit we were taken to an old American naval base that they Cubans had turned into a huge medical training complex. There was a family day on at the time and people were there from 100 different countries. They were trained so they could go back to their own countries and improve the medical care. You can argue about the rights and wrongs of state socialism but it’s worth mentioning the real difference projects like this make.”

Refusing to be drawn on links between Cuba, the IRA and the ANC, Gerry said that it was well known that the republican movement “always had solidarity and close ties and an affinity with Cuba and South Africa.”