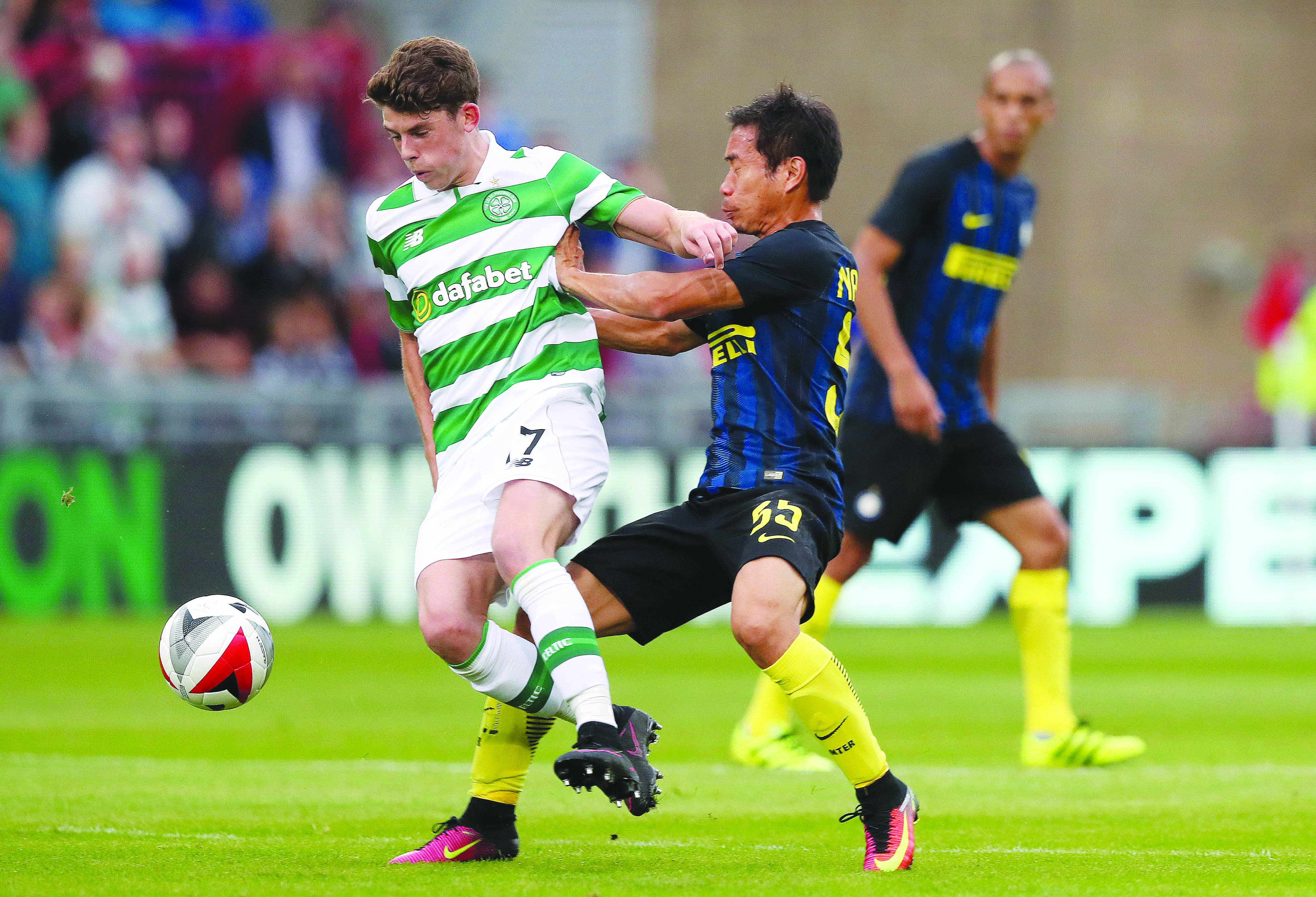 THE campaign is really starting to crank up for Celtic with another week where they had a perfect record of played two, won two.

These wins would have given the Celtic manager a lot more satisfaction than in previous weeks, however, as they were achieved without conceding any goals.

Defensively, the Bhoys have not looked as solid as they should be so it was a most welcome return to the shut-outs which will be crucial in this year’s title challenge.

The Bhoys took their time against Latvian champions Riga last midweek but got there eventually to claim their place in the Europa League play-offs.

The home side played a very defensive game, trying to disrupt and frustrate Celtic and it took until the 90th minute before Elyounoussi scored the only goal of the tie.

The Norwegian front man has failed to hit the heights of the early part of his loan spell last season but there’s no doubt he is a talent and he certainly knows where the back of the net is.

He followed up with a goal in his next game and is now giving Neil Lennon plenty of reason to keep him in his starting 11.

Moi had only been on the pitch for less than 10 minutes in Riga before Jeremie Frimpong’s cross found him in the middle and he made no mistake.

Frimpong had also come on as a substitute and his impact on the game as a whole was just as impressive as the goal scorer. He is another player who is making it impossible for Lenny to leave him out such is the rich vein of form he currently finds himself in.

As a very young player, it is understandable that the coaching staff at Celtic Park are trying to protect his precocious talent, but he never seems to be phased by anything on the pitch and is showing all the qualities that Lennon is looking for in a wing-back. He fits the tactics and shape of the team perfectly and I’ve no doubt he will play a massive part for them this year.

Celtic’s next European game will be on Thursday, away to FK Sarajevo, where a win will give them access to the Europa League group stages.

It may not be Champions League but realistically it is Celtic’s level at the moment and, having beaten the Bosnians home and away last season, they will be confident of taking their place in Friday’s draw.

Domestically, Sevco are keeping up the pressure at the top of the Premiership table so Celtic have no margin for error in league games.

Hibs took points off Steven Gerrard’s men a few weeks ago so they would have come to Celtic Park in reasonably confident mood. They were blown away, however, in the face of arguably Celtic’s best display of the season.

Frimpong was named man-of-the-match and rightly so but there were so many excellent performances and as I said the clean sheet would have been the icing on the cake for Neil Lennon and his staff.

Two of the most criticised players this campaign have been Greg Taylor and astonishingly, Scott Brown, but both were excellent last Sunday.

There is a certain section of the Celtic support who always need a scapegoat to blame for everything and Taylor is pretty much the guy that they have latched onto, criticising him every single week whether warranted or not.

And despite what Scott Brown has given to us over the years, the same doom and gloom merchants appear at the beginning of every campaign and berate him for every mis-placed pass. And then we hear the old battle cry: “his legs are gone!”, almost as if they want it to be true.

There’s no doubt Scott will have to be used sparingly going forward as he simply cannot go on doing what he has been doing, playing week-in, week-out and forcing the tempo in games, but I’m sure there’s nothing he likes more than silencing his critics every now and again. He did it again on Sunday.

The win against Hibs keeps the Bhoys nicely tucked in a point behind Sevco but with a game in hand. They will look to maintain or better that position with a win at St Johnstone this Sunday before the international break kicks in.

Once that is out of the way it will be time for the first meeting of the season with Sevco, giving both teams the chance to show where they are in the race for the league title.

There will be much more than just the three points at stake in that game. Both teams have shown a reasonable level of form this season, but it will only be when they have faced each other that the true picture will emerge. This game should tell us a lot about how the season is likely to unfold.

With the game not due until October 17, the current transfer window will have closed and we may have lost a player or two by then.

Missing out on the Champions League riches is a blow in the current pandemic-affected financial climate, and there may well be a need to replace lost matchday revenue by cashing in on a playing asset or two.

Ntcham, Ajer and Christie have all been mentioned lately as targets for other clubs and under normal circumstances I would have no problem with any of them going if the price was right. In this season above all others, none of them should be allowed to leave unless equivalent replacements are found, be that from within the current squad or in the transfer market.

Last Sunday against Hibs, David Turnbull showed us that he may well be the man to replace Christie at some point as he was given 45 minutes to show what he can do.

His set-pieces were excellent and he created the goal for Elyounoussi with a sublime through ball. The target now is for him to force his way into the manager’s plans and retain the jersey.

The most worrying potential exit would of course be Odsonne Edouard who is by some way the club’s most bankable asset.

Pundits have been quick to say he has looked disinterested in games this season and if that was true there would be cause for concern. However, he is a naturally cool, almost aloof character so I don’t think there’s anything in that.

That is not to say, however, that moves aren’t being made in the background. He is a proven performer and will not be short of envious glances from teams in bigger money leagues.

He has also missed a lot of football in recent weeks, reportedly through injury.

Hopefully, that’s all it has been and nothing more sinister so that come the Glasgow derby in a few weeks’ time, he will be leading the line in green and white hoops.

Having put their money on the table for season tickets despite the possibility of not being able to attend any matches this season, I think there would be some considerable unrest among the Celtic support if their most prized player was allowed to leave simply to plug a financial hole.