Chemist strike will have ‘huge impact’ 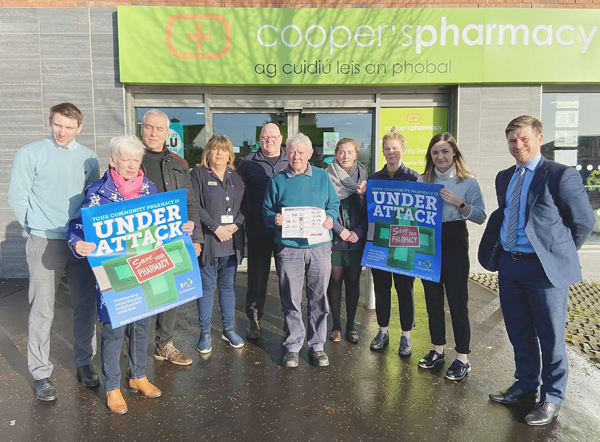 SUPPORT: Michael Cooper and Pat Sheehan MLA with Cooper’s staff and customers as the prospect of strike action looms

A BELFAST pharmacist has blamed “chronic” underfunding and workforce pressures for the upcoming industrial action at community pharmacies.
At a closed meeting in Belfast on Monday, 98 per cent of community pharmacy contractors in attendance voted for the action.
The meeting was attended by 95 contractors representing 418 pharmacies across the north.
Community pharmacists say they have reached breaking point and they have major concerns about how to maintain the safe and ongoing supply of medicines as a result of serious underfunding and a work-force crisis in the sector.
Michael Cooper of Cooper’s Pharmacies said that strike action would have a “huge impact” on the delivery of services, but that the current model is “unsustainable”.
“There was a report commissioned by the Department of Health that said the service has been undervalued by at least £20million a year,” he said.
“Couple this with the fact that over 300 pharmacists have been taken out of Community Pharmacy and moved into GP practices and that has led to a chronic shortage of pharmacists. So there are two levels: it’s chronic underfunding and workforce pressures, which have led a lot of pharmacy contractors to believe that the current service levels that are being delivered are unsustainable and there is the potential there for safety issues in the delivery of services and medicines for patients.
“Community Pharmacy is 100 per cent behind the delivery of services, advice and safe medicines for patients, but we have to look at the current model and make a decision on whether those services are safe to deliver in their current form.”
He added: “The current model is untenable and unsustainable”.
Community pharmacists have voted overwhelmingly to press ahead with industrial action on contractual and patient safety issues stating it is now the “end game” in the face of what they believe are insurmountable funding pressures.
Chief Executive of Community Pharmacy NI, Gerard Greene, said: “We have been warning the Department for years of this growing crisis. A litany of unresolved issues stemming from sustained underfunding now means that community pharmacists have reached breaking point.
“The decision to take action is not one reached lightly and we regret that the refusal of the Department to address this crisis has brought us to this, but our network is at the point where the safe delivery of crucial frontline services for patients could be compromised.
“Over 123,000 people visit pharmacies in Northern Ireland every single day. The ability to access this service and professional advice keeps people out of GP surgeries and hospitals.
“Community pharmacists already play an enhanced role in transforming our health service but until the Department engages in meaningful talks to stabilise community pharmacy funding and address the current issues then it is only paying lip service.”