Chloe is aiming to be top of the world 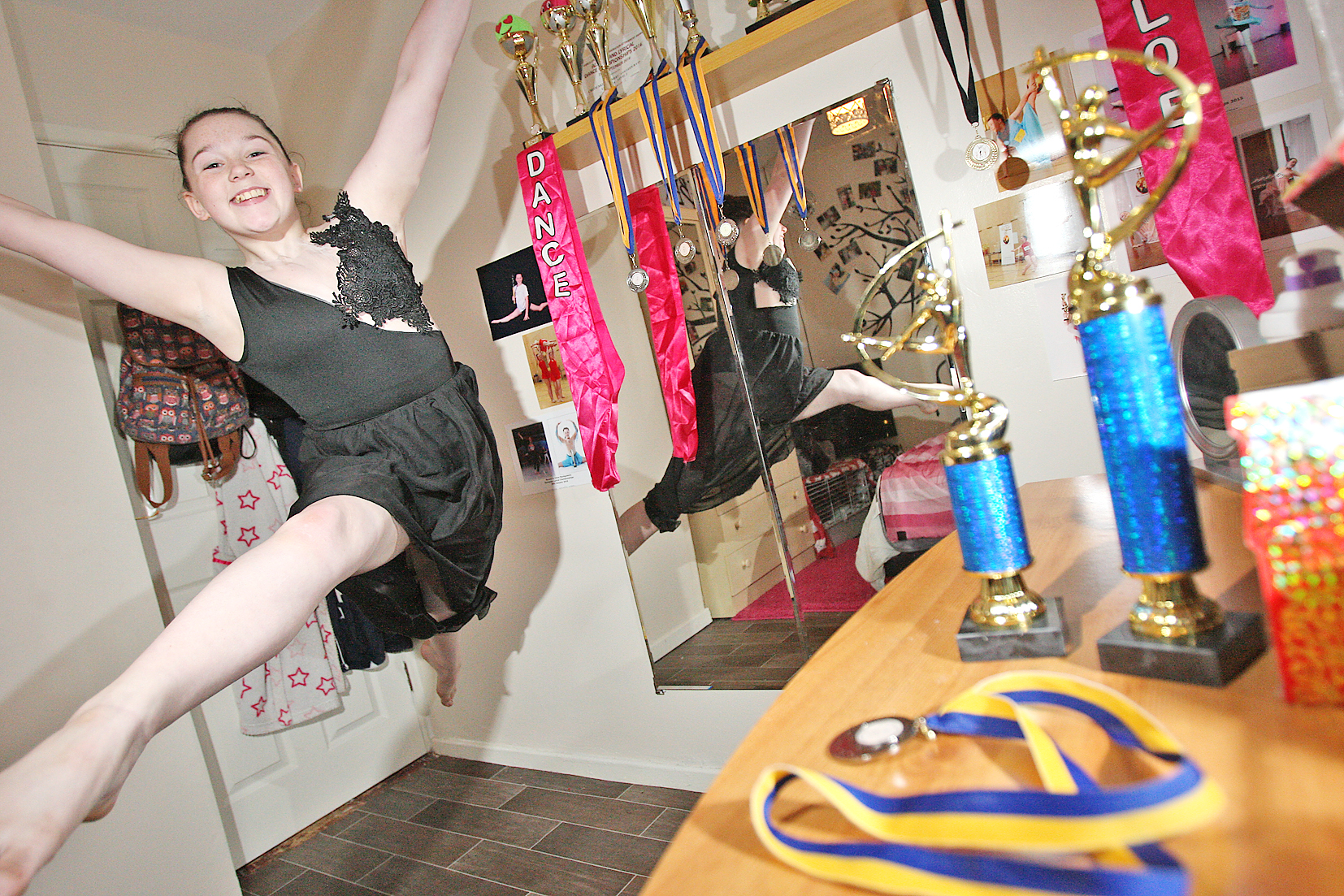 Chloe Montgomery with her awards from competing in lyrical dance competitions

A LOCAL schoolgirl has qualified for the World Championships in Lyrical Dance after being inspired by the art through a hit reality television show.

12-year-old Chloe Montgomery from Turf Lodge has been attending lyrical dance school since becoming fascinated with reality TV show Dance Moms. She explained: “I love this show called ‘Dance Moms’ and it’s one of the reasons I became interested in lyrical dancing. At the time I started watching the show I was doing hip hop classes but watching the difference in the girls performances in the show I just thought that’s the type of dancing I want to be doing.

“Lyrical dancing is like story telling with facial expressions, kind of like contemporary dance – but not as weird! It is more elegant but can still allow you to be dark. I really like it because I can tell stories with my performance.

“We perform to music with lyrics that inspire the choreography and we also get to wear some great costumes, which my mum usually buys for me.”

The St Louise’s pupil competed in the U-14 category for the first time in November where she qualified for the World Championships, which will be held in Stratford upon Avon in July 2017.

“At the minute I’m off school for Christmas break, but there’s no break from dancing,” continued Chloe. “It’s not only the dance routine that has to be perfect. My facial expressions have to be perfect too because lyrical dancing is all about emotions and expressing them.

“Obviously I have had to practice a lot to get where I am but I also want to thank my dance teachers Colleen and Erin.”

Chloe’s mum Noreen said she is proud of her daughter’s achievements.

“She’s already on level two, which is great for the time she’s been dancing, the next level is the advanced. At the completion she placed first in her solo and duo, second in her team and third in her quad.

“She is doing very well in her competitions but it does take a lot of time and effort. She would practice a couple of times a week but if a competition is coming up then its extra classes right up until the competition itself. Then we have to sort her costumes!

“Her granddad lives with us and is unable to attend her competitions but when she came home with the trophy he was over the moon for her, really chuffed. He has seen the hard work she puts in at home, constantly practicing and doing her stretches whilst she’s watching the TV at night.

“She is very excited to be going to the World Championships later this year.”

While Chloe is looking forward to the opportunity to travel through her dancing she has her sights set on London where she hopes to avail of one of the world's most influential dance education and professional membership organisations.

“I would really like to go over and dance with the Royal Academy of Dance in London,” said Chloe.

“I would love to have a career that involved dancing and I think that would probably be a good start.”