CITY HALL REPORT: There's life in Belfast City Council - but not as we knew it 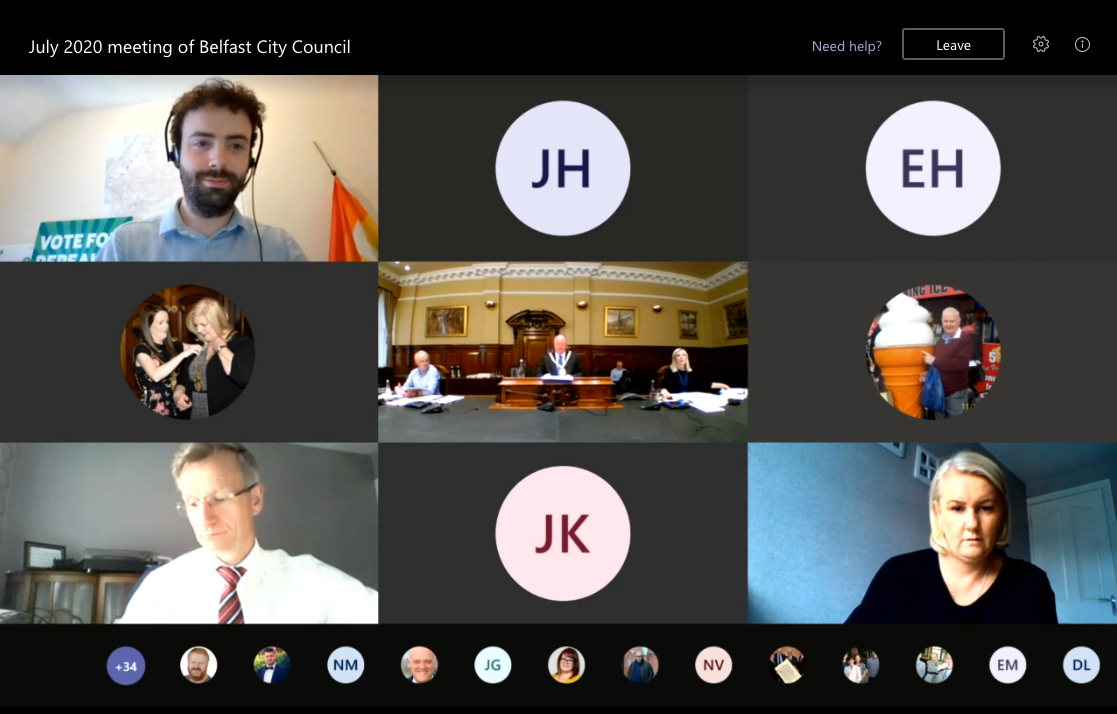 IT was a Belfast City Council meeting like no other on Wednesday night with July’s monthly meeting held virtually for the first time.

With Covid-19 restrictions still very much in place, the meeting was conducted using Google Meets technology. Of course, there were teething issues with connection problems for some councillors (I won’t name any names) but, for the most part, it was wonderfully held together by new Lord Mayor Frank McCoubrey, Chief Executive Suzanne Wylie and the rest of the Council team who were broadcasting from a committee room while the other 59 elected members logged on.

Business began on a sad note on the day young Noah Donohoe was laid to rest with tributes from all parties.

The Lord Mayor sent condolences on behalf of the Council to family and friends of 14 year-old Noah and paid tribute to everyone who helped search for him, praising both sides of the community and the search and rescue team for their efforts.

It was on to the minutes of the Committee meetings of the month just past and, as usual, there were issues raised with the Strategic Policy and Resources Committee- some things never change!

Sinn Féin councillor Ciarán Beattie raised an ever-present issue with Council on the policy regarding dual-language Irish street signage. He proposed getting Belfast City Council on board with other progressive Councils in the North on the issue whereby you need a third of the street to initiate a change in policy and a majority of 50 plus one to agree to the dual-language signage.

DUP Alderman Brian Kingston argued that Council already has a policy and streets are added every month. He said it was a “contentious” issue and said having the majority of residents opposing such signage was not sustainable.

SDLP councillor Dónal Lyons reminded councillors it was not about removing English street signage but simply adding the Irish equivalent.

After a roll call vote, the proposal was voted down by 33 votes to 25 but it would be foolish to think we have heard the last on this issue.

Up next was a widely debated issue on buses in the city centre amid pedestrianisation plans, raised by DUP Alderman Brian Kingston.

Other parties raised insisted a proper consultation would need to be carried out, with some citing the busy Ormeau Road.

SDLP councillor Dónal Lyons said it was not about abolishing bus routes, but simply moving some of the stops in a current climate where “space is the new currency.”

Eventually, the proposal to allow buses from North Belfast into the city centre up Royal Avenue was voted down.

With the popular St George’s Market and Smithfield Market set to open, Green Party councillor Aine Groogan successfully passed a proposal which asked for a report to be put together on waiving fees for traders for six months.

SDLP councillor Séamus De Faoite also successfully passed an amendment to the Brexit Committee minutes, asking for Council to write to the Prime Minister, Taoiseach and EU for an extension of the Brexit transition period.

It was on to the motions and first up, was PBP councillor Matt Collins condemning the murder of George Floyd and calling for Council to support the ‘Black Lives Matter’ movement with a particular emphasis on asking for support against fines, cautions and threats of prosecution arising from a protest in Belfast on June 6.

The motion was passed eventually but amended to remove the outright reference to opposing the fines and threats of prosecution meted out to the protestors.

The remainder of the motions (listed below) were referred to the relevant Committees without debate.

Alliance councillor Michelle Kelly proposed suicide awareness training for both Council staff and councillors as well as appointing mental health champions in each Council department. She said that the Covid-19 pandemic will exacerbate the mental health crisis in the city

SDLP councillor Gary McKeown called for opening the city’s streets for everyone, given the new appetite for walking and cycling. He called for Council to play its part by issuing a programme of temporary road closures to be rolled out across the city.

Finally, Áine Groogan raised the common problem of littering in the city and called for Council to commit to providing recycling bins in parks and public spaces and where appropriate, provide additional general waste bins in communities.

And thus a historic first was made with a virtual Belfast City Council meeting- maybe we will all be back in City Hall in September (there is no monthly meeting in August) but then again, maybe not.

These parties must end their vendetta against the Irish language community pic.twitter.com/jMqFpiNqSb