Cliftonville hope to bounce back against Warrenpoint 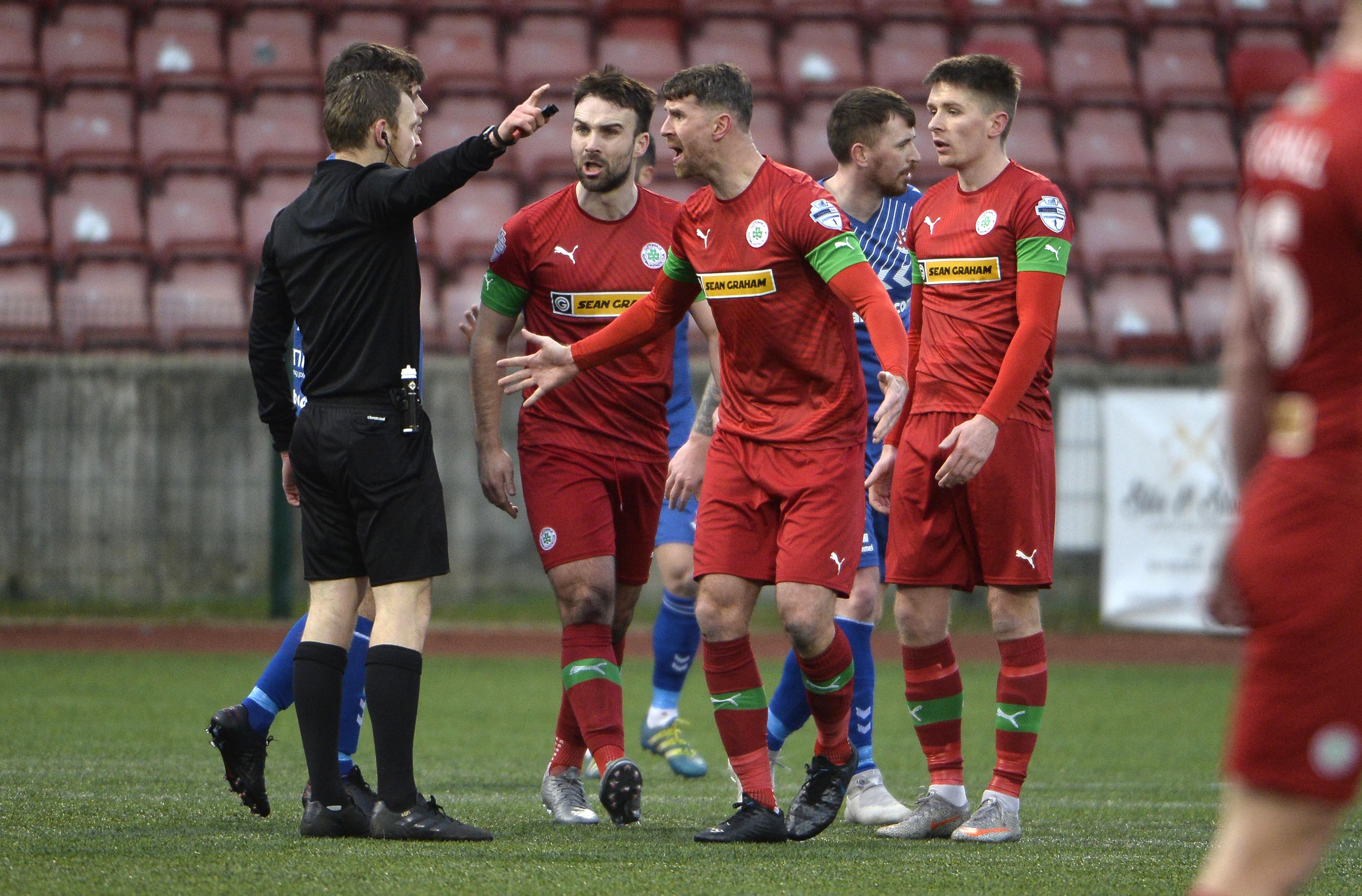 CLIFTONVILLE manager Paddy McLaughlin has challenged his players to park there disappointment of Saturday’s defeat to Glentoran as they get set to welcome Warrenpoint Town on Tuesday evening (7.45pm kick-off).

Barry Gray’s side will travel to Solitude with confidence having secured a valuable point away to Larne at the weekend.

McLaughlin is expecting Gray’s side to provide an equally difficult challenge at Solitude and says his side must dust themselves down after the weekend's disappointment.

“There’s no games easy and Warrenpoint showed that resilience on Saturday to get a point away at Larne,” warned McLaughlin.

“I’m sure they’ll be delighted with that and it was probably against the odds a bit. I suppose Larne’s home form has been superb so it shows you how well Warrenpoint have played and how hard they worked.

“We expect them to bring the same on Tuesday night so it will be a tough game. There’s no easy games in the Premiership, never has been, especially this year it has been so competitive and every game has been tough going. We need to dust ourselves down, get over the disappointment of conceding the late winner and get back on it again on so we can prepare for Tuesday.”

McLaughlin acknowledges that he will he need to make rotations to his squad for Tuesday night due to the nature of the hectic schedule of late but doesn’t believe it will weaken the team.

“The schedule that all players and all clubs are facing is crazy,” McLaughlin reflected.

“It’s an endless run of Saturday-Tuesday fixtures; it’s too much for a player to be expected to play every minute in all them games - it’s almost impossible.

“We’ll assess the squad come Monday and see what we’ve got because there were players who came into today’s game tired and rightly so. We’ve built up a good squad in the transfer window and it’s just a matter of rotating one or two or whatever we decide to go with. It definitely won’t weaken our team because we’ve got a good squad of quality players.”

On Saturday the North Belfast outfit were undone by Jamie McDonagh’s late goal that condemned the Reds to their first defeat of 2021 and only for a late penalty stop from Aaron McCarey, things could have been much worse for the 10-men after losing Garry Breen to a second yellow card in injury-time.

McLaughlin insists his side have a lot to learn and lamented conceding late winners a few times this season.

“The conditions were the same for both sides,” McLaughlin admits.

“The pitch wasn’t great with the time of year, both flanks were really soft on the ground and really poor in fact. There wasn’t much quality we were going to get from wide areas so we tried to play a lot through centrally. We only played in phases, which was a wee bit disappointing because we were excellent on Tuesday night against Coleraine.

“It wasn’t really a good football match but we could have done a lot better. The effects of Saturday-Tuesday, Saturday-Tuesday had caught up with one or two players and they showed signs of being tired earlier in the game.

“I think we probably deserved a point and it would have been a good point away to Glentoran. It’s well documented they’re full-time and the resources they have so it’s always going to be a tough place to go. I think we fully deserved a point but we got done in the 90th minute with a brilliant strike by young McDonagh. It was a fantastic strike but we’re disappointed in the build-up that we didn’t deal with things better and see out the game.

“We’ve a lot to learn from it, especially late in games, because that’s a few times now that we’ve conceded goals late on. We’ve got to manage the game better and we’re disappointed not just to lose our point but the manner of it.”

McLaughlin is disappointed to be without the services of Breen for Tuesday evening’s game but defended the centre-half for trying to do the right thing for the team.

“It’s a decision that Garry has made late in the game,” said the Reds boss.

“It was a wee bit gung-ho in the end. We were just trying to put the ball in the box and he decided to try and step into play and do the right thing for the team to try and get us up the pitch. We got caught in possession and he was defending a one-versus-one situation where he’s only one mistake away from a second booking and a sending off.