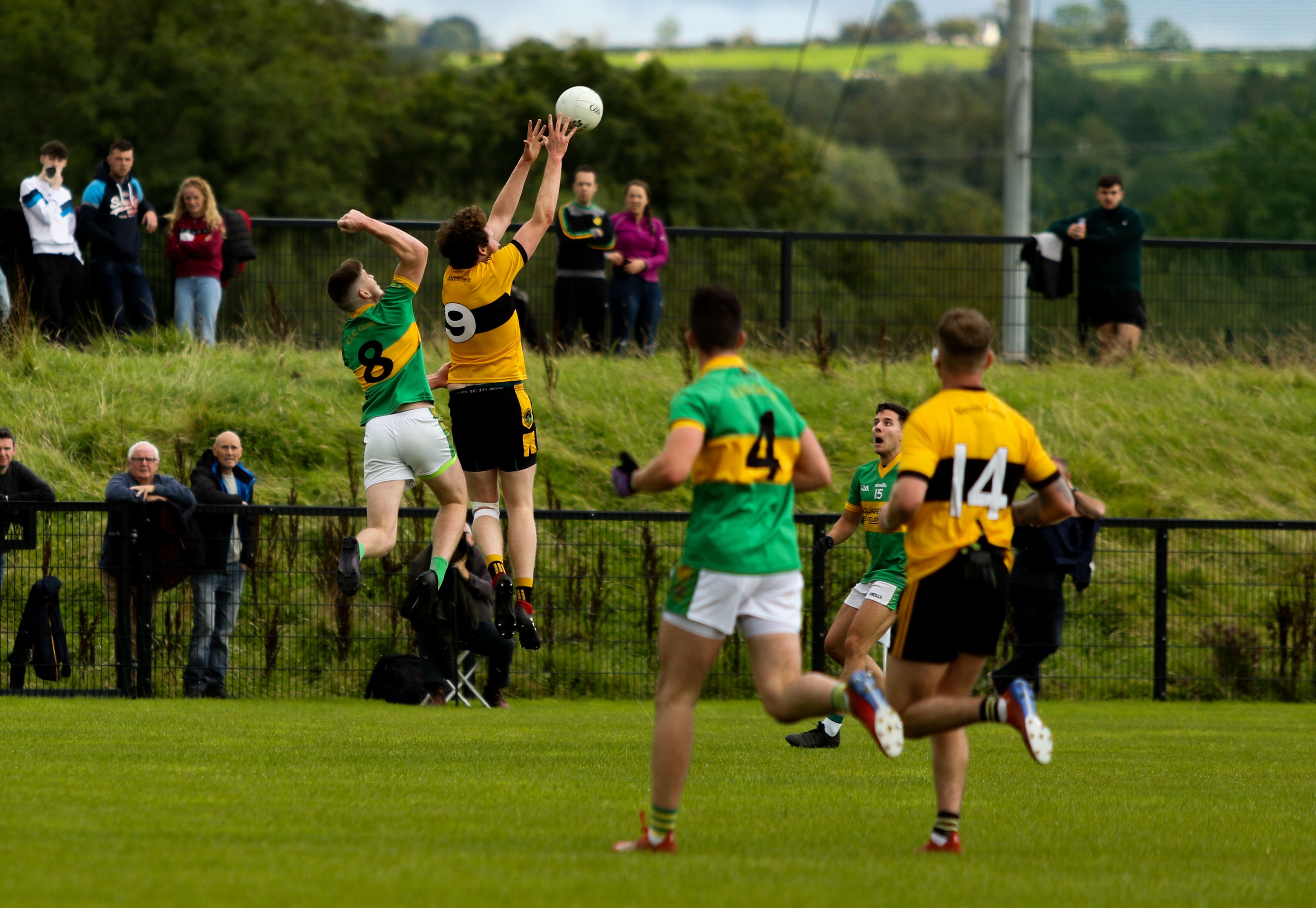 CREGGAN booked their place in the last four of the Antrim SFC with an impressive seven-point defeat of Naomh Éanna at Dunsilly on Sunday afternoon.

The Kickhams made the perfect start with a goal from Paddy Coey inside the first five minutes followed by a 1-3 salvo, including two excellent long-range frees, from the boot of Ruairi McCann to help them to a  2-3 to 0-4 lead at half-time.

Naomh Éanna might have sensed it wasn’t to be their day when Odhran Eastwood dropped a 30-metre free into the arms of Oisín Kerr early in the second half and they struggled to impose themselves on the game.

A goal from raiding wing-back Ciarán Thompson came too little too late for the Glengormley side and Tiarnan McAteer’s stoppage-time goal wrapped up a comfortable victory for Creggan.

Creggan suffered an early blow in their bid to reach the semi-finals when full-forward Liam Quinn was forced off the pitch just minutes into the game with a hamstring injury.

The North Belfast outside missed a hat-trick of early scoring chances and Creggan took full advantage when a fine pass form Marty Johnston played Coey through on goal and the Derry native blasted past Paddy Flood for the game’s first score on five minutes.

McCann then proceeded to give an exhibition of free-taking when he stroked over two long-range frees off the ground either side of a brilliantly-struck ’45.

Ethan Gibson got Naomh Éanna off the mark after 12 minutes, but they were struggling to break down a well-organised Creggan defence.

McCann was then involved in their second goal when he played a neat one-two with Coey which cut through the Naomh Éanna defence and Coey’s pass left McCann with a simple finish at the back post to put Kickhams 2-3 to 0-1 ahead.

Eastwood converted a much-need free for his side on 27 minutes and the 2018 Antrim and Ulster Intermediate champions landed the final two points of the half via Mickey Morgan and a stunning effort from defender Ryan Kennedy.

Trailing by five at the break, Frank Fitzsimons introduced Joe Maskey and Padraig Hamilton for the second half, but it was a Creggan sub who landed the opening score of the half when Jamie McCann split the posts.

A free from Coey nudged Creggan seven ahead and the game was slipping away from Naomh Éanna.

To their credit, the continued to battle against the odds and Maskey’s presence at midfield was starting to reap rewards.

Eastwood’s free was quickly cancelled out by a point from play from Conor Small moments after his introduction for Kickhams and he added a mark minutes later following a superb point from his brother Kevin.

However, Naomh Éanna were given a lifeline when they plundered a goal midway through the second half.

Good work from substitute Fionn Nagle put midfielder Niall McKeown through on goal. While his initial shot was blocked, the ball fell for Thompson, who finished well to leave the score at 2-8 to 1-5 in favour of Creggan.

Despite being six ahead, Creggan seemed to be searching for another goal during the final 10 minutes of the game, much to the frustration of their management team.

Another classy free from McCann steadied the ship somewhat, but the eventual winners didn’t raise a white flag for the final 10 minutes of normal time as Naomh Éanna finished with a flurry of points from Eastwood (two frees) and Fionn Nagle to cut the gap back to four points in injury-time.

Naomh Éanna’s prospects suffered another blow when they lost Kennedy to what, unfortunately, looked like a serious knee injury late on.

As the Hightown men pushed up late on, they left themselves open at the back and when Maskey’s pass to Kristian Healy was intercepted by Kevin Rice, he immediately played the ball forward to Kevin Small who had yards of space.

Small’s unselfish pass across to the incoming McAteer presented the corner-forward with a clear shot on goal and he finished with aplomb, tucking the ball into the corner of Flood’s net.