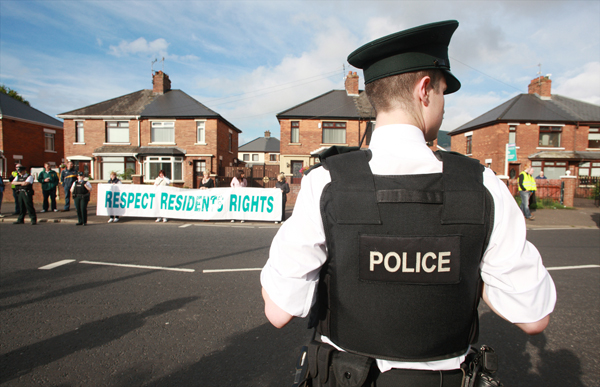 An expected deal that could see the protest camp at Twaddell dismantled as early as Friday has yet to be officially published with the clock ticking on the proposals.
A meeting of Ardoyne residents will take place this evening with the agreement expected to be outlined for the first time.

The Belfast Media Group understands that the Ligoniel Lodges will apply to complete their return parade at 7am on Friday morning, having given an agreement they won’t file for any return parades past nationalist homes on the Crumlin Road at Ardoyne until there is local agreement – something that may never happen.

Friday is a significant date within unionism as it marks the 100th anniversary of the beginning of the Battle of the Somme.
Under the terms of the mooted deal, once the agreed parade is completed, Camp Twaddell will be dismantled.
The terms of the possible agreement have been negotiated by a Derry businessman who was central to the resolution of the city’s parading deadlock which is now seen as a template for local accommodation. Clergy have also been involved.
Already the anti-Belfast Agreement Greater Ardoyne Residents’ Collective (GARC) have said they will oppose the deal.
“This supposed deal has been agreed without any consultation with local residents whatsoever and it will be opposed,” said a spokesman. “Our response will be peaceful, radical and a mobilisation of people to oppose this decision. We will also be calling on people from around the country to support local residents.”
There is also scepticism within loyalism about the deal with the UVF involved in the talks but the UDA pulling out. Of the three lodges involved in the talks, only two are understood to have accepted the deal, a split which may ultimately lead to its collapse.
No official comment has been made by the Orange Order or the Crumlin Ardoyne Residents’ Association.