Community is united in grief at Matt’s death 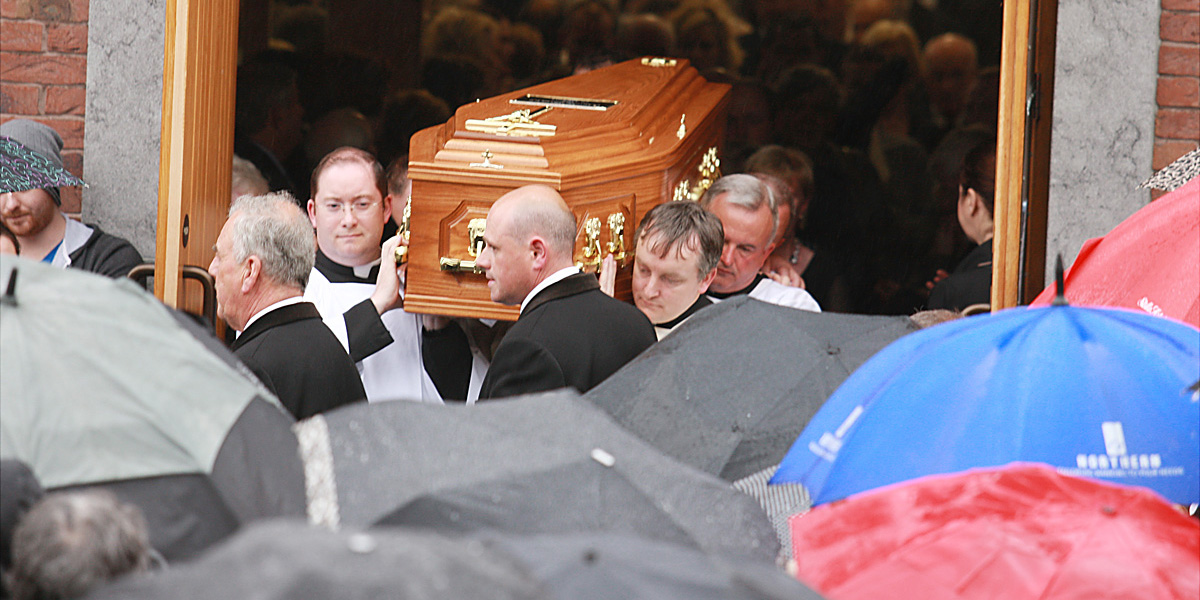 THE West Belfast community and beyond was united in grief on Tuesday as mourners gathered in Turf Lodge under grey skies for the Requiem Mass for Fr Matt Wallace.

69-year-old Fr Matt, a priest and local community stalwart for some 40 years in West Belfast, died on Friday, June 7 at the Holy Trinity parochial house in Turf Lodge. He had taken his own life.

Fr Matt was born in Kilbride, County Wexford on September 12, 1943 and was ordained on May 31, 1970. He comforted the people of West Belfast for almost four decades through some of the darkest days of the Troubles.

The Monagh Road and Monagh By-Pass were closed off from as early as 10.30am as thousands of people made their way to Holy Trinity church to pay their respects to the Parish Priest who had “consumed himself in the service of others.”

Inside the church several plastic containers overflowed at the side of the altar where heartbroken parishioners had left Mass cards, teddy bears and their own private letters to the man who had married, baptised, conducted funeral services and offered so much comfort for so many members of the Turf Lodge community.

People of all ages attended the packed service, many visibly upset and wiping away tears as they filed past the coffin where he had laid in an open coffin since Monday.

Several books of condolences were open beside the altar and prayers and letters lay beside a photo of the man who had helped and healed so many lives in the wider West Belfast community.

As the service was due to start hundreds lined the walls inside the packed church and many hundreds more stood outside in the rain, with many sitting on the altar such was the mass outpouring of grief.

Representatives from Gort na Mona camogs and committee were also in attendance along with members from the local boxing clubs and many local business owners.

The haunting Latin hymn of Requiem in Aeternam was sung by the priests in attendance who included Fr Brendan Hickland, Fr Patrick McCaffrey and Fr Paul Byrne, before Fr Thomas McGlynn delivered his powerful homily.

“Looking at such a large crowd gathered here, I know what Matt’s first thought would have been – this is too good a chance not to pass the basket! No-one we know could ask for money or raise funds like he could.

“This beautiful and much admired church, of which he was so proud, was free from debt within a few years of construction because of that amazing skill and thanks also of course because of the generosity of this great parish and community of Holy Trinity and Turf Lodge who gave him such love and loyalty, most wonderfully expressed in the vast number of people who have come to pay their respects and pray for him these past 24 hours.”

As mourners openly wept, Fr McGlynn, a former curate at Holy Trinity, spoke of how a quote had stuck in his mind about Fr Matt when someone said how he “reminded me of Jesus, he treats everyone the same.”

“Over the five privileged years I worked along side him, I recalled and saw how true those words were. On a personal level I know with his example and guidance I grew up both as a man and as a priest in this parish and I will be forever in his debt for his friendship that began during those years which we maintained since I went to work as a chaplain in the Royal Victoria Hospital in 2003.

“What finer words could be said about a priest, especially on the day of his funeral than he reminds me of Jesus?”

Fr McGlynn said the “difficulties of contemporary priestly life” must be acknowledged.

“Demands and expectations are increasing despite fewer in our ranks and less vocations. More of our parishes will have to be amalgamated and it’s an  unrealistic dream that we can maintain the same level of service from when most parishes were served by two or more priests.

“This creates many problems. There are no easy solutions and more priests face burnout and struggle with loneliness and the reality that in a sense, that we belong to everyone and to no-one, even though we have the positive and affirming love of families, friends and parishioners,” he said.

“It is not that we as priests feel we have made the wrong choice in our way of life, though some do feel that way; it is that a life of service in a bruised and wounded church can be challenging and is both physically and mentally demanding.

“It is a hard truth and one that cannot be denied or dismissed and for some it has become intolerable or very difficult to bear.

“Fr Matt struggled with all these issues and it was painful for his family and all who loved him to see him weakened and dispirited, especially for someone we regarded as strong in the best sense of that word, someone who always attended to the needs, worries and troubles of others with little regard for his own. Generosity lies at the heart of the priesthood but often a high price is paid for such an ideal and sometimes it can bring you to a bleak and difficult place.”

Fr McGlynn spoke of how Fr Matt “never missed an opportunity to get some new scheme up and running” adding “here in Turf Lodge we have the fruits of that ability.”

“His famous shops at the top of this street, the church I have already mentioned; there is also the youth and boxing club, Gort Na Mona GAA club, Holy Trinity School, all have benefited from his Midas touch.

“Over the years he co- founded Bredagh GAA and was a president of Lamh Dhearg GAC; from sporting to social, pastoral and spiritual provisions, wherever he worked he always wanted the best for people, especially youth organisations; how fitting that so many are present here today, especially the school choir, recalling the day they sang at the opening of this church on December 10, 2000. This was the Jubilee project, suitably ambitious and even more remarkably  built and opened in 10 months.”

A thunderous round of applause followed.

As Fr Matt’s body was carried out of the church a guard of honour was formed by members of Gort na Mona as the procession of thousand made its way to Milltown.

Fr Matt lived longer in Belfast than his native Kilbride, County Wexford, and his brother James said that the family had decided to bury him in Milltown Cemetery “among the people he served and he loved.”

So it was fitting the final resting place for this  “extraordinary West Belfast priest” was among the community which had taken him and held him so dearly in their hearts.