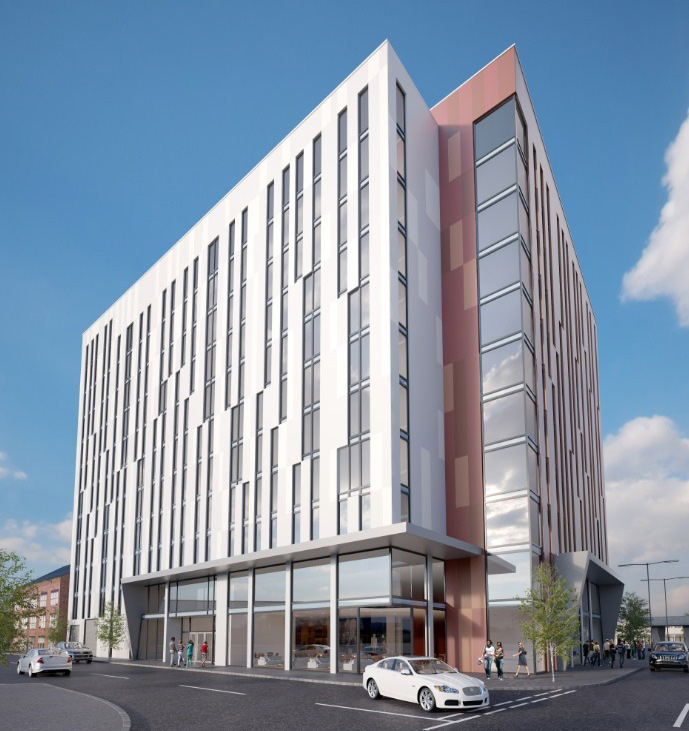 How the Little Patrick Street development will look

REVISED plans for an already huge student apartment development on York Street that will see more units added is causing concern amongst residents living nearby.

This week Lacuna Developments and the Wakin Jones Group announced the purchase of a site from another developer who had secured planning permission for an 11-storey building with 354 student studios. Revised plans due to be submitted by the new owners will increase that to 430 units.

“There was previous consultation on the original plans so what happens now that the number is increasing, will there be more consultation?” he asked

“These units are designed for students but we remain to be convinced that there is that much need. Our suspicions are that these will be eventually converted to social housing units.”

“This news is of huge concern and raises several issues about this particular site and the management of student accommodation in Belfast in general,” she said.

“Planning approval was originally given for an eleven floor apartment block for students at Little Patrick Street. The developer is now selling the project on to a second party who it is reported intends to apply to increase this block’s capacity by up to 80 more students.

“Local residents, housing activists and political leaders have consistently voiced our concerns about these practices of so-called ‘flipping’, where agreements are made and then undermined by selling projects with planning approval on.

“It’s not only an issue of density, but also of developers’ undertakings as to how such schemes will be managed, undertakings that the second party isn’t bound by. What is required is a comprehensive strategy in Belfast to manage such developments including where they should be and how many are needed, as if left only to the private sector this is a recipe for chaos.

“We will be watching this project closely and any revised planning application must stand up to rigorous scrutiny in the best interests of local residents, students and the people of Belfast.”

“We look forward to delivering a fourth student accommodation scheme and securing more than £100m of investment for the city,” he said. “In September 2019, the completion of the Ulster University campus will bring 15,000 more students and staff to this area of Belfast. The revised plans for Little Patrick Street will contribute less than one per cent of the accommodation required.

“Through our experiences with John Bell House, Dublin Road and Athletic Stores, we have built up our understanding of the student market and demand in Belfast. Our changes to the scheme will provide the right mix of studio and cluster bedrooms to meet demand