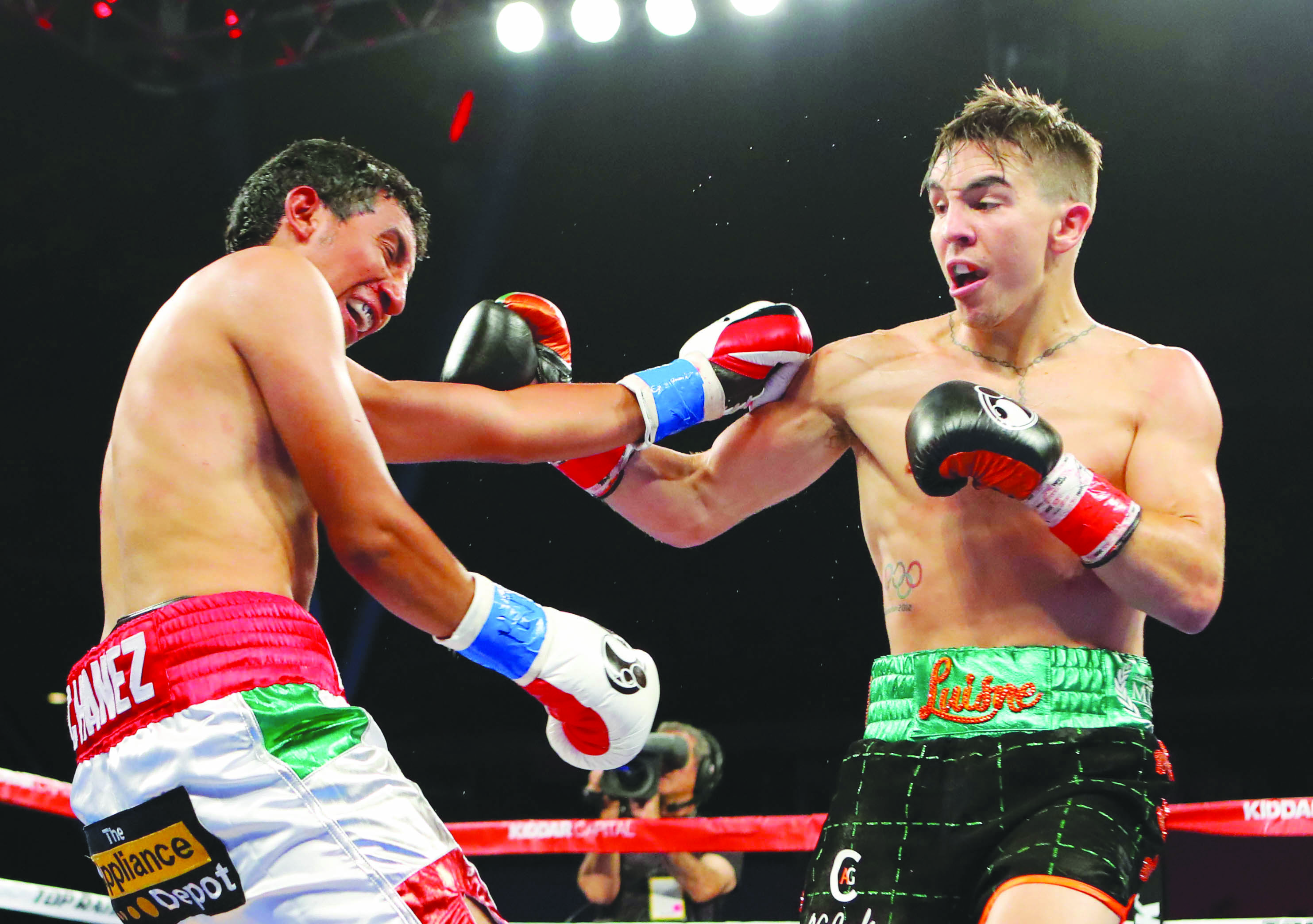 Michael Conlan, pictured during his win over Alfredo Chanez in Chicago last month, makes a quick return to action when he challenges Jarrett Owen on the undercard of Manny Pacquiao’s bout against Jeff Horn in Brisbane on the early hours on Sunday morning

MANNY Pacquiao’s WBO welterweight title defence against Jeff Horn may be the main attraction at Suncorp Stadium, Brisbane on Sunday morning, but Michael Conlan views this as the perfect opportunity to take centre stage on the landscape of professional boxing worldwide.

The West Belfast man enters his third pro contest as a featured attraction on the bill when he takes on a local in Jarrett Owen over six rounds at super-bantamweight.

In his two professional fights to date, Conlan has been the man topping the bill and that in itself brings pressures in terms of promotion, but with Filipino legend, Pacquiao in the spotlight this time around, Conlan can just concentrate on the job at hand against the 31-year old Owen (5-4-3) whose last bout for the Australian title ended in a draw and represents a step up in opponent this time around.

“I’m just looking forward to being in the ring,” said the LA-based Conlan before departing for Brisbane last week.

“I can just go about my job as normal, just go in there and not have to worry about putting on a show for everybody because all the attention will be on the main event, so that is going to be a nice bit of comfort.”

Conlan is expected to be in the ring around midday local time – a throwback to his amateur days when he boxed at different times of the day – meaning an approximate 3am start Irish time to tie in with primetime in the Unites States.

While it may be winter in the southern hemisphere, it will still be a warm day in the south Queensland city and Conlan says he expects the many Irish fans who will be in attendance to turn up the heat in the stands while he does likewise in the ring.

“They (promoters Top Rank) wanted to do a stadium so they needed somewhere where it will be warm,” explained the 2-0 Conlan.

“It’s going to be unbelievable. I know there are a lot of Irish going.

“People have been shouting me from Australia saying they are all going, even from places like Melbourne.

“For me to be one of the co-features with Pacquiao is unbelievable.

“No matter where you go there are always a load of Irish fans and then he is going to have loads there cheering him on as it’s his own country. But they will be drowned out because Irish fans are very loud so I don’t think he is going to feel like the home fighter here. He’s going to think he’s in Ireland.”

While the Irish will certainly create a din, the home support will also be getting behind their man so it makes for a great atmosphere, but Conlan will be aiming to silence the home support from the off and dispel any notions that Owen can cause an upset.

He is naturally confident he will do that, but is aware he is coming up against highly motivated opponent.

“I’m fighting an Australian in Australia. This is the biggest boxing event to ever happen in Australia so he is going to want to come in and upset the applecart,” he acknowledged.

“He’s going to want to do something that hasn’t been done before and that’s beat this up-and-coming prospect who has so much hype.

“I’ve only had two fights so he is going to come in with real belief.”

Having topped the bill in New York and Chicago already, this affords Conlan the opportunity to showcase his skills to a whole new audience and he is determined to take this chance to win new admirers before having a well-earned break back in Belfast before returning to LA ahead of the new boxing season.

“This has been a bit of a whirlwind tour so far,” he agrees. I made my debut in New York, been to Chicago and now Brisbane. I will fight back in Ireland this year.

This is going to be on ESPN in America at prime time so there could be as many as 100 million viewers worldwide for this show. That’s a great platform for me.

“I’m going to have a few weeks off after this one.

“I’m looking to put on a smashing performance and go home with a big smile on my face.

“I’ll look forward to the next one, but for now I’m looking to just enjoy a victory and enjoy some time off because after the last one ( a third round stoppage of Alfredo Chanez) I didn’t really enjoy it with me being over-critical of myself.

“I suppose that’s just how I am sometimes, I can be my own worst enemy, but I still didn’t enjoy it as much as I probably should have.”