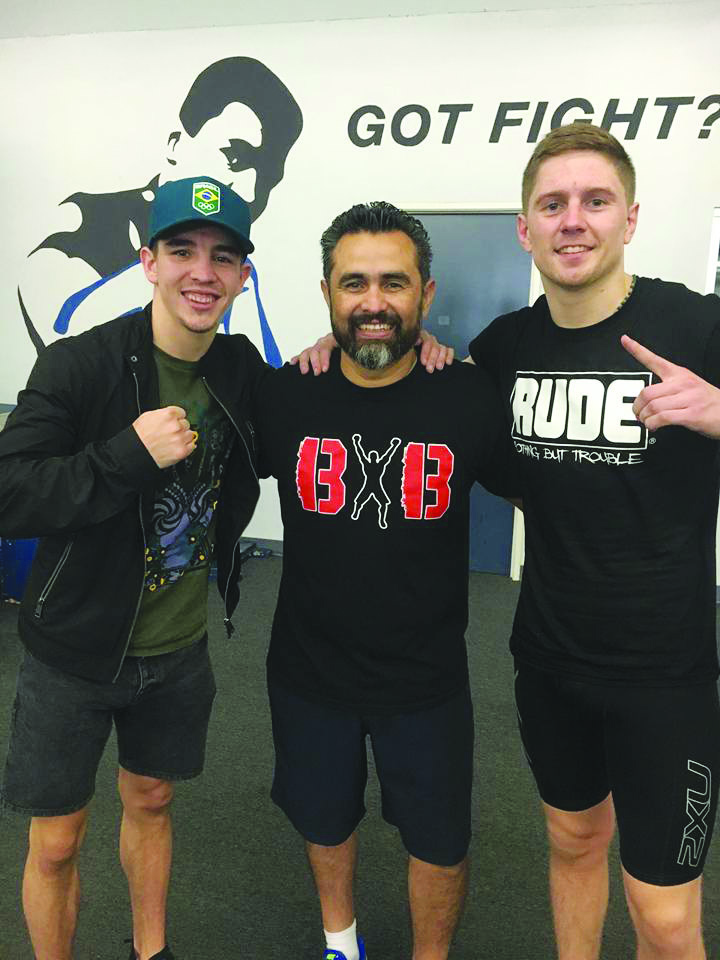 IT was a strange experience for Michael Conlan to purchase one-way flight tickets last week for when he heads to Los Angeles on January 10, but he confirms he can’t wait to get his professional journey underway.

The 2015 world amateur champion will return to the Rock Gym to train under rising coach, Manny Robles following an enjoyable brief stint with the Californian last month.

Having spent so long in the bosom of the Irish High Performance Unit, training alongside friends and under coaches such as Zaur Antia, his father John and of course, Billy Walsh who now himself is based in the United States, the move Stateside could have been daunting. But despite the short time he and Robles spent together, Conlan says he is certain he has made the right move and is looking forward to working with his new coach.

“It was brilliant. I really enjoyed it,” said the 25 year-old. “Great surroundings, great team and the coach I was working with was fantastic. On top of that, he’s a lovely guy also and very easy to get on with.

“You have to like your surroundings. If you’re going to work every day and not enjoying it then there is no point in doing it. Especially if it’s boxing, you have to be happy and I will be very happy where I’ll be. “Probably one of the main things is ‘did you have a bond with the coach?’

“If you have that bond then he will get the best out of you and I believe this guy is one of the best coaches in the world as he is proving it. I had that bond with him also so that made things ten times better.”

Robles is indeed one of better young coaches around and in his Los Angeles gym, hones the skills of WBO featherweight champion, Oscar Valdez and Jesse Magdelano who prised the WBO super-bantamweight title from Nonito Donaire three weeks ago as-well-as Conlan’s former Irish team-mate, Jason Quigley amongst others.

Despite just being to rise to prominence in recent years, Conlan points out the vast experience Robles has of coaching in the amateur game and also in the professional ranks.

“He is young enough for a coach,” notes Conlan. “In terms of the boxing scene, he has done very well in the last two or three years even though he has been a coach for loads of years and was working as a coach in a heavyweight tournament held in America and was a WSB coach (with the Los Angeles Matadors) and a former Brazil national coach for six months or so, but didn’t like it down there and came back up.

“He was also the USA national coach, so he has a vast amount of experience and has trained a lot of professionals. He is very experienced despite just being relatively new on the scene at the same time.”

The Los Angeles gym is a magnet for a growing number of pugilists and while it may not have the star factor of Freddie Roach’s Wildcard Gym in Hollywood just yet, it is certainly a base that is beginning to get results and Conlan intends to continue that going forward.

“It’s (Robles’ Rock Gym) is probably how the Wildcard was ten years ago, not a place where celebrities just went to get pictures and stuff,” says the super-bantamweight hope.

“It’s a proper gym with proper fighters and top sparring. Fighters there are coming from all over the world and all over the country to spar there, so it’s probably one of the best gyms in the world at the minute.”

While the switch to the United States will have emotional repercussions, leaving family and friends as he, his fiance Shauna and daughter Luisne set up a new life for themselves, Conlan laughs when he explained the relocation aspect is not all it’s cracked up to be at present with so much to organise. However, the focus remains on his debut in Madison Square Garden on St Patrick’s Day and he intends to hit the ground running in the new year.

“Buying a one-way ticket is weird enough, but I’m still in the process of getting things sorted in the house and getting it up for rent,” he explained.

“It’s going to be my last Christmas living here for the next two or three years probably. “I’m just going to enjoy it (this year), see my family and friends. “I’m already in training at the minute ticking over, getting back into general fitness, but come January I will be full steam ahead. My camp starts on January 1 even though I will be at home because that is 10 weeks out, so I’ll be giving it full pelt.”