Conlan has the ingredients to score victory 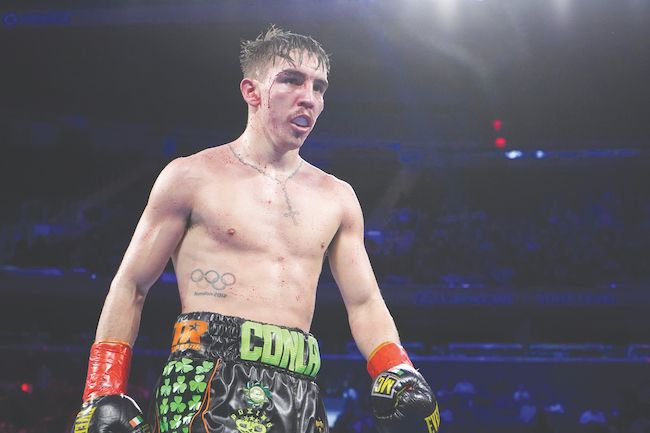 Michael Conlan says he feels refreshed after the lockdown break

EVERYTHING happens for a reason. That’s the doctrine Michael Conlan has lived by and what has driven him on throughout 2020 as he prepares to make the final approach to a world title when he faces former challenger Sofiane Takoucht, live at the BT Sport Studios on Saturday night.

Having rounded off 2019 with a comprehensive victory over Vladimir Nikitin in Madison Square Garden, the plan was to work towards a world title shot on home soil this year.

Had Covid-19 not thrown a curveball, those plans may have come to fruition, as would his St Patrick’s Day showdown in the Big Apple against Belmar Preciado that was called off at the eleventh hour due to the pandemic landing a haymaker to life as we knew it. With that fight cancelled, the Falls fighter was eager to get home to his family and into lockdown that was thrust upon us all.

Baking, instead of boxing, was to be his go-to for several weeks but having satisfied his kitchen cravings, the hunger to get back to what he does best swiftly returned, resulting in a door fully opening that had been slightly ajar for a number of years.

Conlan’s first two professional outings came at super-bantamweight, but the decision was made to operate up at feather and it seemed this is where his world title challenge would lie.

However, having put in the miles following his brief blowout in spring, he returned to camp fitter, stronger and in better shape than ever before, resulting in his plans to win world titles from super-bantam to super-feather revived.

He will face Takoucht on Saturday at 126lbs, but insists he could easily make 122 and this is where his future will lie should all go according to plan on Saturday with WBO champion Angelo Leo now firmly in his sights rather than the vacant featherweight strap.

“I can make super-bantamweight this week - that’s how good I’m making the weight here,” he told Belfast Media Group.

“I came out of lockdown on the weight and that’s why the talk (of moving down to 122lbs) has been more realistic.

“After my (St Patrick’s Day) fight was cancelled I was eating what I wanted, went on a baking and cooking spree, eating this and that.

“It was the first time I had no restrictions on me as there was no time limit on it so I could eat what I wanted. I started to feel normal again but then when I got through that, I wasn’t hungry for all the junk food after about three weeks.

The break from boxing seems to have reinvigorated a fighter who has been on the go non-stop as an elite amateur and as a pro where he boxed 13 times in the space of 33 months.

It’s not that the desire waned, but certainly, that schedule of moving from camp to fight or tournament and back to camp again can set in a little mental fatigue.

With a young family, the opportunity to spend time at home and lead a civilian life for a little while has helped refuel the fire.

I haven’t had a break like that in so long, so for me it was fantastic as it refreshed me and I have a hunger and passion again. I’ve always had it, but maybe it wasn’t shining as brightly as it had been. Now, I feel hungry again and really want to put on a performance, whether I spark this guy out in 10 seconds, two rounds or whatever. It’s almost hit the reset button in terms of how I feel about boxing and I feel refreshed. I’m looking at becoming a three-weight world champion again and that’s something I really want to achieve, but before I can speak about that I have a task ahead of me on Saturday against Sofiane Takoucht.

His French opponent will arrive in London having lost in a world title challenge to Josh Warrington last time out.

On that occasion, the 34 year-old southpaw was much too slow, stiff and square-on as he was overwhelmed in two rounds to see his record slip to 35-4-1.

However, the other three defeats all came on the cards in competitive fights, so the Warrington fight was perhaps not a true reflection on what he can bring and the sedate environs of a studio may suit him more than a packed, partisan hall.

“I think against Warrington he froze under the headlights,” Conlan suggests.

“He had 20,000 people or whatever it was against him, probably having things thrown at him as he walked to the ring and then he went in there against an aggressive guy who went there to take his head off.

“I don’t take much from that fight at all. If you look at his other losses, they have been by split decision and majority decision and that shows he is a durable guy, tricky, is a southpaw so has that awkwardness about him, but I’m ready for anything and prepared well for it.”

Conlan - a switch-hitter - is certainly much more slick with a skillset that far surpasses that of Takoucht.

He boxes mostly at southpaw, but is just as adept as an orthodox as his ring smarts usually see him solve the puzzle in front of him in the opening moments of a contest.

Some will point to Takoucht’s capitulation to Warrington and will compare what Conlan does on Saturday as a marker to where he stands in terms of world level, but such chatter doesn’t interest him.

That is the attitude going into Saturday’s contest and he is confident he has the ingredients to march on.

“This will be just my second southpaw,” he points out.

“The first was Jason Cunningham, who, funnily enough, has been my sparring partner for this one.

“He is very similar in terms of style and stature to Takoucht so I think the preparation for this has been great.

“There are a lot of southpaws around featherweight and super-bantamweight so it is a style to get used to in preparation for an actual fight.

“I don’t care what other people say or think. Whether they think I’m amazing or boring, it really doesn’t matter to me. The critics aren’t the ones going into the ring.

“It’s a matter of opinion and everybody has one, so there’s no point in getting caught up in trying to live up to anybody else’s expectations bar your own.”

His mental strength has always shone through, his steely gaze simply on the prize ahead and what he needs to do to get to that summit.

There have been bumps along the road, especially when boxing in the vest.

A defeat in his opening fight at the 2010 Commonwealth Games to Andrew Moloney simply spurred him onto the breakout at the London Olympics two years later, whilst the crushing reverse in Rio against Nikitin only served to double down on his quest to prove himself as a pro.

Therefore, lockdown and an enforced absence from boxing so far this year, including a planned return to the Falls Park a fortnight ago, has been viewed as a plus rather than an opportunity lost.

“Everything in my career and life has happened for a reason,” stressed the father-of-two.

“Go back to 2011 and I lost to (Andrew) Selby in the World Championships’ quarter-final, but that got me a bronze medal in London.

“If I had won that fight, I could have ended up fighting the Cuban (Robeisy Ramírez) in the Olympics in the quarter-final and wouldn’t have got the medal.

“I am where I am now because of what happened in Rio, so I believe these things happen for a reason and lockdown has given me the chance to work on different things: my weight, mindset, and let me reenvision the goals I want to achieve.”

In his mind, boxing behind closed doors this weekend is another opportunity.

The chance to focus in on the fight rather than the occasion, experience performing with just Adam Booth’s instructions as a soundtrack and deliver a performance that will sound warning to the champions at super-bantamweight and featherweight is all he is concerned about: “I’m actually excited about it as it’s something different - a different type of challenge

“You’ll maybe see more of a vicious side in this one so it’s something to be excited about.”

There is nothing to suggest that this will be anything other than win number 14 in as many pro outings for Conlan.

With the batteries recharged and his body in as good shape as it’s ever been, he expects to deliver big.

In the end, lockdown was to provide fresh opportunities. He won’t be found wanting to avail of those and should begin on Saturday in fine style.