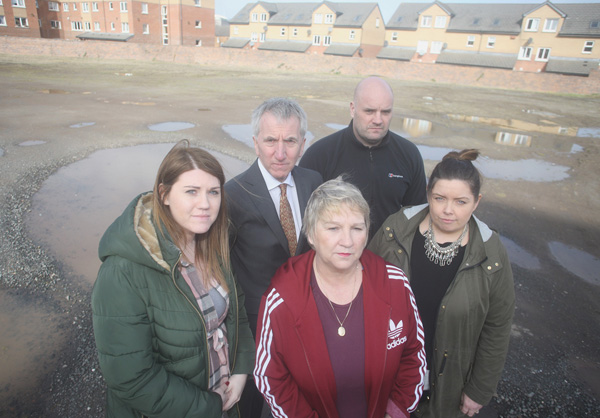 SOUTH BELFAST Councillor Deirdre Hargey has accused Belfast City Council of breaking a pledge to allow social homes to be built on the Gasworks site at Ormeau.

Councillor Hargey was speaking following a vote by the Planning Committee of Belfast City Council to make land earmarked for social housing on the Gasworks site available for office block developers.

An angry Cllr Hargey said: “For almost ten years, the people of the Market have been subjected to foot-dragging and broken promises by Belfast City Council in relation to long-awaited new homes on the northern fringe of the Gasworks site.

“Part of this site was zoned for housing in the Belfast Metropolitan plan in 2014. This is Robin Hood in reverse – more valuable public land gifted to property developers instead of urgently put to use for local communities.”

Discussing the Planning Committee’s decision, Cllr Hargey said: “There have obviously been moves at play to push this through no matter what. On the one hand the land was zoned for housing, planners knew they couldn’t just flip the zoning unless there was a masterplan agreed for the site.

"The community’s view was they agreed with the masterplan, they also agreed with mixed use but we had to have guarantees of what numbers of houses were going to be there as part of the masterplan. Council refused to do that and forced through a masterplan, we were the only party I think that voted against it because it didn’t include the number of houses.

"Already, residents are in court over a skyscraper office block approved by Council in Stewart Street in the Market against the wishes of residents. The Council should be aware that residents will not hesitate to fight just as hard to prevent them riding roughshod over their right to have their housing needs met.”

Cllr Hargey added: “There is a critical need to house 86 applicants in housing stress, the majority of those are for three-bed homes, that’s predominantly families who are homeless. The Housing Executive as a public body have also said that no planning application should be agreed until the housing is agreed on as part of the overall masterplan and planning and Council have completely ignored that to force this through.”

Kathleen McCarthy from the Market Development Association (MDA) said: “The site from Cromac Street right to the car park in the Gasworks was zoned for social housing as well as the NIE site in the Market.

"We had tried to get Council to put a masterplan in place before any planning applications were allowed to go ahead. The MDA did a representation to Council on Tuesday evening along with Councillor Deirdre Hargey and Claire Bailey of the Green Party, unfortunately it went through and planning permission was granted for a four- to six-storey office building, we know going by Council’s draft masterplan that this same developer also has plans for a multi-storey car park and an extension to the Radisson hotel.

"The planners in City Council are saying there’s still room for social housing but that’s not enough commitment for us, we don’t know where it’s going to go. We need to know exactly how many units will be available, we have had meetings with the Housing Executive from the beginning of the year in relation to this, there’s 106 people on the waiting list with 86 of those being classed as living in housing stress.”

She added: “This is an area of high and sustained social housing need, the Housing Executive have contacted council on a few occasions and they have submitted letters to planning asking for clarification on the exact location of the housing and how many homes there will be.

"As of yet none of those questions have been answered. The Housing Executive are suggesting there should be at least fifty social homes, that’s not including affordable or private homes on the site. We met with Council on Thursday morning and they still don’t have an idea of how many units there will be. This is public land, they should be working closely with the Housing Executive.

"Council have been circulating an updated proposal for application notice, that basically means they are going to put in an outline for a masterplan, which includes not only the Gasworks but also includes sites J and K on Ormeau Avenue, consultation for that will be between October 27 and November 10. We haven’t seen any updated plan, the most up to date plans we have seen are from December 2016.

“So if the developer gets the go-ahead for his others plans for a multi-storey car park and an extension of the Radisson then where’s the housing going to go?”

Cllr Hargey continued: “This is a wider attitude in Council towards inner city communities, particularly working class communities where there’s no recognition and no respect shown.

“As part of the Belfast Agenda the back of City Hall, the Linen Quarter, was designated for offices. Council aren’t even trying to push or locate office development to their own designated sites. Council are completely ignoring the rights and the entitlements of communities and people who live in the city centre, which feeds into the wider issue of there being a class agenda.

“The city centre is bound by inner city working class areas, the same issues are now happening in the likes of Carrick Hill and Donegall Pass around the need for social housing. People have a right to the city as much as developers do.”

Meanwhile, on Monday evening a meeting was held in the Market Community Centre along with Sinn Féin reps and reps from Participation and practice of rights in which the MarketDevelopment Association (MDA) launched the ‘Homes Now Campaign.’

The group has been launched to demand that Belfast City Council delivers on the much-needed homes they promised on the Gasworks site.

Councillor Deirdre Hargey said: “There will be updates soon on the MDA campaign and I would urge all residents especially those waiting on housing to get involved.”