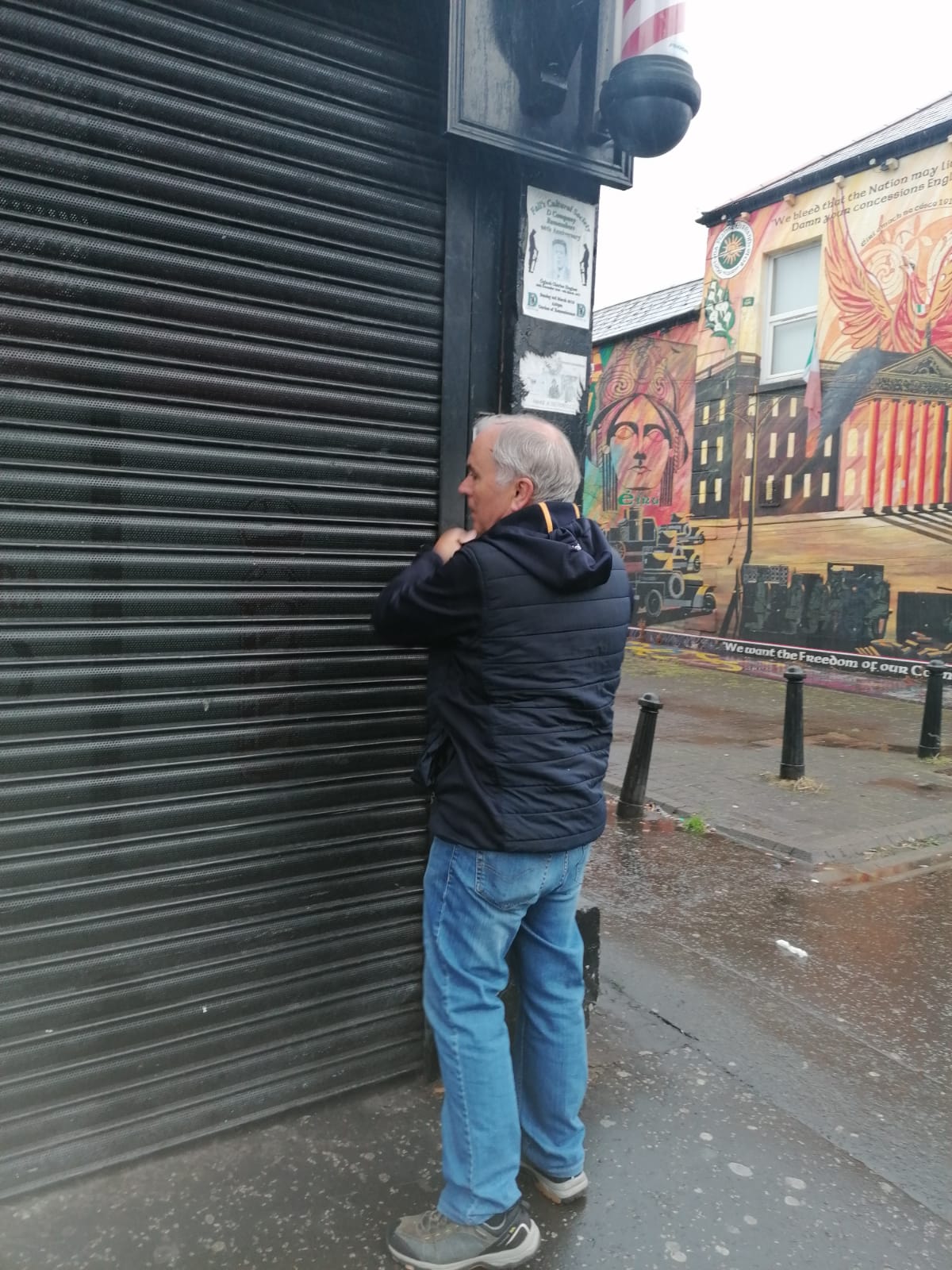 ONE of West Belfast’s most iconic barber shops has pulled down its shutters for the last time after over 30 years of service.

It was the final cut for Pat’s Barbers on the Falls Road on Friday as it closed its doors for good.

Opened by Pat Hall in 1989, the barber shop has been a mainstay on the road over the years, serving generations of customers from all over West Belfast and beyond.

Pat began serving his time the Executive barbers on Castle Street in 1974 and says he “never dreamed” he would open his own business. But with a young family to support, he decided to “dive in”. The rest, as they say, is history.

“I was skint and all my mates were doing the double, I had three kids, a mortgage, and I hadn’t a washer and your man wouldn’t let me do the double,” he laughed.

“I started to consider working myself, which I never dreamed I could.

“There was a wee unit round the corner from where the shop is now. Another barber told me that the wee unit was going up there, and he said to me ‘You’ll never own a barber shop, a barber shop owns you’ – he tried to talk me out of it.

“The shop unit round the front was Truly Fare, and they were getting a bit of hassle – they got broken into and the unit was then lying empty. I spoke to the landlord and he tried to talk me out of it because the rent was dear and the rates were dear, but that took off too. I got another guy in, opened the wee room upstairs. We were flying – I didn’t know what hit me.”

Son has been going since first haircut in 1998, Pat will be greatly missed, end of an era #pat the barber https://t.co/TWoFRNvlg7

As well the haircuts, Pat, like most good barbers, became a confidant for many of his customers to share problems, tell yarns, and put the world to rights.

“The upstairs became like a confession box,” he said.

“People were bleeding their heart out to you – I was solving problems.

“Mostly I was trying to keep the kids right, give them the old republican ethos – it might have worked for some.”

A repeated winner of the Best of the West awards, Pat says his favourite memories are too numerous too list. There are a few bad and tragic memories too – some better forgotten or told another time – but Pat reflects on a few of the dodgy hairstyles and requests that some customers might rather forget.

“All the boys come in now with their own kids and grandkids, and they used to get the bowl haircuts with the step,” he said.

“Some of them bring photos in and say ‘Look what you did to me.’ That was all the go then. Then there was the Mohicans, the flat-tops, the combovers.

There were shaved Nike ‘ticks’ that “looked like hurls”, and a questionable haircut pioneered by Brazil striker Ronaldo at the 2002 World Cup.

“The Ronaldo haircut was shocking,” Pat recalled. “The mas used to bring them back.”

As tourists began flooding to Belfast after the ceasefires, visitors from all over the world would regularly nip up to Pat’s Barbers for a photo. In recent years the shop had a visit by Manchester United icon Eric Cantona.

“While the legendary footballer didn’t need a haircut at the time, Pat’s has cut its fair share of famous hair – the most eminent around these parts being West Belfast MLA Fra McCann. Pat also fondly remembers a visit from Sinn Féin’s Niall Ó Donnghaile after he was elected Mayor.

“I cut Niall’s hair from when he was a child and when he became Mayor he was up to see us with the chain – that was brilliant,” he said.

The onset of the Covid-19 lockdown forced the shop to close its doors for what Pat thought would be a temporary period. However, at 62 years old he says the free time gave him a new perspective on work/life balance.

“I’ve a few mates in the graveyard, and I was in the park or the graveyard nearly every day of lockdown walking past their graves – they’re there five years and they would’ve been the same age as me,” he explains.

“It was a reality check. It made me step back. The quality of life was great during the lockdown because of the free time. I got to spend some quality time.”

Pat’s Barbers will undoubtedly be missed by the people of West Belfast, and Pat says the feeling is mutual.

For now, though, Pat’s off to enjoy his caravan in Omeath.